J.W. - in an attempt to retain his anonymity, Müller never reveals what his initials stand for. J for Johannes? W for Werner, Walter or Wolfgang? These two names can only be of Germanic origin, yet the initials are cunningly suggestive of two English first names - James and William, for example. Since he disappeared in Land of Black Gold, Müller has tried his best to keep his first names a secret. 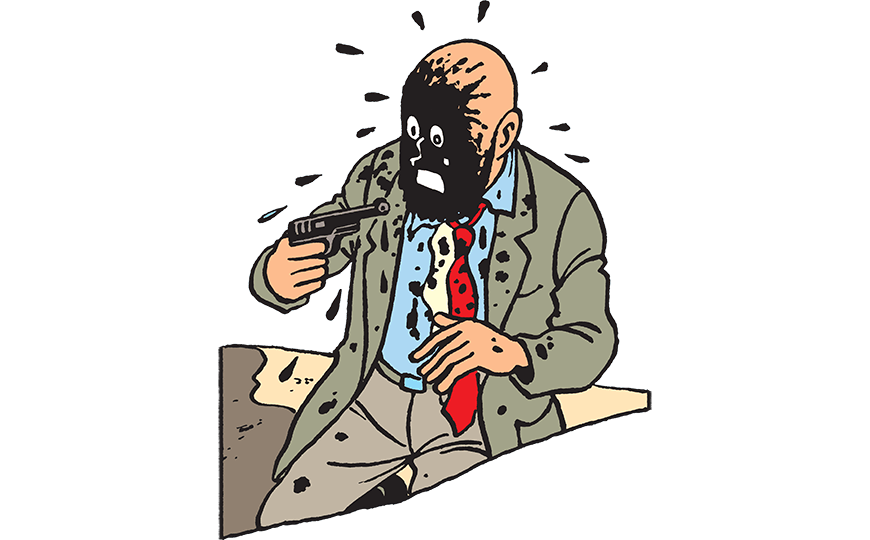 Outlaw with many faces

Whether sporting a small goatee or fully bearded, under diverse disguises and multiple identities, J.W. Müller has played a part in the biggest events of the twentieth century, always batting for the wrong side. Conspirator, counterfeiter, natural plotter, killer if need be, Doctor Müller turns up everywhere from Great Britain to the Middle East.
While there is a ridiculous side to Roberto Rastapopoulos's Machiavellianism, Müller is evil personified.

In The Black Island, where he makes his first appearance, J.W. Müller is very proud of his title "doctor", but in reality he's far from adhering to the Hippocratic oath. He is very straightforward on this point: "I happen to be the medical superintendent of a private mental institution," he cynically tells Tintin, his prisoner. "Rather a special institution. Not all of my patients are insane when they are admitted, but after eight hours of "special treatment", they are unlikely to recover."

Not the best role models

The story of The Black Island unfolds in 1938, in a Europe that is rushing headlong into a new world war. Having warned his readers against the expansionist plans of dictators like Mussolini and Hitler (joined together in a single character, the Syldavian conspirator Müsstler), Hergé was now echoing the war between the secret police services, with their increasingly low tricks.
Low tricks? Müller doesn't hang about! He follows the example of another doctor, a Scotsman named George Bell, who lived in Germany and was a staunch supporter of the Nazis.

At the end of The Black Island (1938), the front page of The Daily Reporter, a Scottish daily newspaper, announces the arrest of Müller and his accomplices by Scotland Yard. Yet Müller does not end up facing the death penalty or life imprisonment, punishments reserved for spies. Was he exchanged for a British spy being held by the Germans?
It will always remain a mystery, as governments do not readily divulge this kind of information. In the end it didn't take him long to return. The Black Island appeared in Le Petit Vingtième from 15 April 1937 to 16 June 1938. A little more than a year later he popped up again in the Middle East!

After a detour through the Balkan states in King Ottokar's Sceptre, Tintin sets sail for the Middle East, which is already at this time the land of "black gold". This is certainly the only thing that interests Müller in all three versions of Land of Black Gold.
In 1939, Tintin disembarks at Caiffa, a thinly-veiled Haifa, in reality a Palestinian port under British control. In the 1948 version of the story, the Palestinian town is actually given its real name of Haifa, which is still under British control. Following the creation of the state of Israel (1948), everything changed in this unstable part of the world, and thus in 1971 Hergé sent Tintin to Khemikhal, the port of entry into Khemed, a key nerve centre.

Money is his only god

During the course of his despicable career, Müller has served several masters. In The Black Island and the first version (1939) of Land of Black Gold, he worked for the Nazis. After trying to destabilise the British economy with counterfeit currency, we now find him less than two years later determined to cut off the supply of fuel to the very same Britain, which is in reality entering into war with the Nazis. In the second version (1948) he has joined the ranks of the "baddies", those wicked mercenaries who will do anything for cold hard cash.

We only know part of Müller's deplorable career, but we know enough to be able to set out some hard facts. He kidnaps Abdullah (Land of Black Gold). There are actually a lot of people who would like to get rid of this little monster, but Müller-Smith doesn't hold back. Only a lucky intervention prevents him from killing the child.

For the eight years between 1940 and 1948, readers of Tintin were kept in the dark about how their hero escaped death at the hands of Müller. On 9 May 1940 the last issue of Petit Vingtième came out. It contained pages 55 and 56 of Land of Black Gold. Müller has Tintin in his sights, and he is about to execute him at point blank range.
Neither page 57 nor any further pages would appear: at the same time in Europe the German army had occupied Brussels and closed down the daily paper Le Vingtième Siècle. Hergé would restart Land of Black Gold after the liberation.

What became of him?

In the second version of Land of Black Gold (1948) Müller is surprised by the arrival of the Thom(p)sons in a jeep and flees the scene. Arrested a second time after being handed over to the law again, Müller still keeps up his deadly activities.
This time he takes care not to engage Tintin in man-to-man combat - perhaps he's learned his lesson! It is from this point that we lose track of him. The rebels to whom he has sold his services are routed, and Mull Pasha-Müller-Smith disappears without a trace. Whatever the case may be, with Müller, Hergé created one of the most unsettling and unpleasant characters in the international underworld... but someone it can do without!

2 reviews
Log in or create a Tintin.com account to write a review.
Close to the best Tintin villain.
The 11th most mysterious person in Tintin