To visit the château de Cheverny – a castle in France’s Loire Valley which has a permanent Tintin exhibit – was irresistible. Granted, I am not normally a “château” fan: Oh, look, I find myself thinking during occasional visits foisted upon me by French friends, rooms filled with expensive stodgy furniture, stodgy objets d’art, and even stodgy wallpaper. But this exceptional coupling of castle and exhibit drew me in. Good-bye, stuffy châteaux: hello, Cheverny! 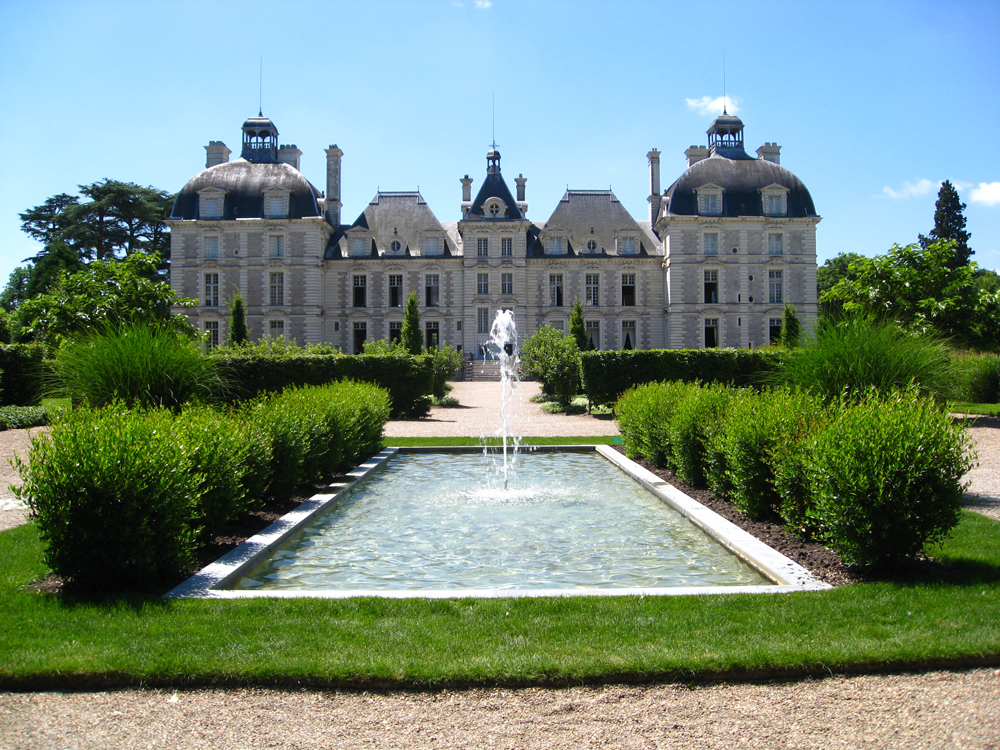 The pairing of a Tintin exhibit and the château de Cheverny is, in fact, a natural one. The Belgian artist Hergé (né Georges Remi) created the Tintin comic-book series in 1929, and as that series developed over the years, Hergé had one of his characters inherit a castle called “Château de Moulinsart.” The name was inspired by a similarly named Belgian village – and the fictional château was inspired by the real château of Cheverny.
Before traveling to Cheverny, I contacted Luis Castellano: the representative in France for the Belgian company also called Moulinsart, which promotes the work of Hergé. Among his other duties, Mr. Castellano helps oversee the many Tintin exhibits across his country’s hexagonal geography. He kindly offered to speak to Marquis Charles-Antoine de Vibraye – the owner of the château of Cheverny – to see if the marquis would be willing to meet with me. Soon afterwards, he sent me the marquis’s contact info. Wonderful! Not only would I visit this unique site, I might also meet a French noble.
But how to address an aristocrat? I queried a French colleague: Sophie Clavier, an associate dean at the university where I teach and advise students. She explained, “Dans la lettre tu commences en disant Monsieur.” Begin with Monsieur? Not “To the Honorable and Esteemed...,” or some other grand approach? This marquis’s ancestors had served at the highest level in various French courts. Still, I took the “Monsieur” advice, and the marquis took no offense: we set a date for an interview.
A two-hour train ride from Paris to Blois-Chambord, then a local bus, brought me to the village of Cheverny. After checking into a hotel, I followed the village’s main, two-lane road to the château. It stood at the end of a long walkway, surrounded by wide expanses of well-tended lawns and assorted pine, cedar, sequoia, lime, and orange trees. And there, in the center of it all, was the château which so clearly resembles the fictional one of the Tintin books. In his drawings, Hergé left off the castle’s side wings, creating a more simple manor-like residence. Every other detail, though, is exact, from the real château’s central tower and rows of high rectangular windows, to the design of its grounds. I was hardly the only one to make the connection; all around me, one excited visitor after another invoked the château’s comic-book equivalent: “C’est Moulinsart!’”
Before the next day’s interview, I would visit the château’s interior and the unique features on the premises: eco-friendly electric-powered boats which cruise along a canal in a forest behind the château; hunting dogs – one hundred basset hounds with legs far longer than those of the more familiar, close-to-the-ground bassets; gardens where various flowers, rows of vegetables, and unusual plants like papyrus grow; and an offshoot of the canal which is home to assorted birds, including slender-bodied black swans from Australia. I wanted to see all of these – but first, I wanted to see the Tintin exhibit.
Tintin, that carrot-top comic-book reporter who trots around the globe rescuing the distressed and oppressed, remains highly popular today, with Hergé’s Adventures of Tintin books read across the globe. During her own globe-trekking, my mother brought back, from Holland, dolls from that comic-book series. As a child, I played with a squeaky Tintin and his dog Snowy, the terrier who often rescues his owner; Thomson and Thompson, the comical detectives who tumble and stumble around, their bowler hats frequently jammed over their eyes as a result; Captain Haddock, the seafaring friend (and inheritor of the château de Moulinsart) with a good heart but quick fuse, who sputters out hilariously alliterative outbursts; and the brilliant, hard-of-hearing Professor Calculus, ingenious inventor and constant muddler of conversations. As an adult, I love the Tintin books for those intriguing characters, the clever puns and sound play which abound in both the original books and their translations, and the drawings themselves, which so astutely portray physical movement, it seems the figures actually travel through time and truly interact with one another.

Jennifer Arin is a poet and essayist, and an academic advisor and lecturer at San Francisco State University. More information about her can be found at https://faculty.sfsu.edu/~jarin.