Saint Nicolas: the other Father Christmas

Tintin was born in Belgium. So was Hergé, who sometimes drew pictures of Saint Nicolas, the patron saint of Belgian children. Readers of this special Tintin report can see some of these drawings, and also find out more about a saint who is the ancestor to Father Christmas !

Do you know the legend of Saint Nicolas ?

Nicolas of Myra lived in the fourth century. He travelled a lot and spent most of his time looking after children, for whom times were hard. The Roman Empire had become extremely poor and children were considered to be useless members of the population ; a kind of burden on society. A butcher caught three children. He killed them, cut them into pieces and threw them into a salting tub. The butcher was desperate for fresh meat to sell, even if it was human flesh. Nicolas passed by and ordered a meal. He was adamant about what he wanted to eat : meat from the salting tub. The butcher collapsed in front of the saint and confessed his crime. Nicolas held his hand above the salting tub and miraculously, the children were made whole again and woke up, as if they had been in a deep sleep. 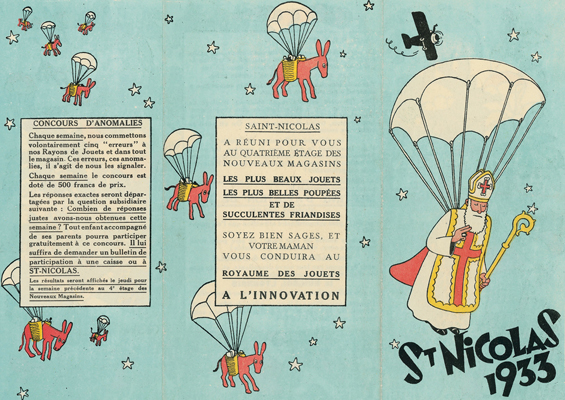 Saint Nicolas all over the world

Even though he has become the patron saint of an impressive number of jobs, Saint Nicolas is above all the patron saint of children. It is in this guise that Nicolas is celebrated in Belgium, Holland, Luxemburg, Germany, Austria, Switzerland, Croatia, Hungary, Poland, Czechoslovakia, Switzerland, Russia (where he is also regarded as patron saint of the country itself) an even in some parts of Great Britain, the USA and Canada. The feast of Saint Nicolas is usually celebrated on 6 December, but sometimes on 5 December. This difference is explained by the fact that the saint does his rounds during the night between 5 and 6 December. He drops presents off at houses where children have been good, and punishes children who haven't been good during the previous year.

- Sometimes Saint Nicolas has company. Most often it is 'Black Peter', who administers punishments to naughty children, who follows him around. In Germany, however, Saint Nicolas travels with 'Farmhand Rupert', a servant who comes down from the sky on a sledge. In Alsace 'Hans Trapp' accompanies the bearded saint. In Luxemburg, 'Housecker', a person whose face is always hidden, follows Saint Nicolas. Strange devils with antennas on their heads and whips in their hands  -  called 'Krampus' or 'Schab'  -  keep children on their toes in Austria.

- Saint-Nicolas is called 'Sinterklaas' in Holland and Flanders. In Luxemburg he is called 'Zinnikleeschen'. Germans speak about 'Niklaus', 'Klas' or 'Bullerklas', depending on the region they come from. Other names include : 'Nikolo' or 'Niglo' (Austria), 'Szent Miklos' or 'Mikulas' (Hungary), and 'Mikolajki' (Poland).

- In Belgium, Black Peter is called 'Père Fouettard' (literally 'whipping father'). The character is most often presented as a black man or as someone with his face painted black. It is said that Black Peter is black because he is the first to go down the chimney (in front of Saint Nicolas), and therefore is the one to get covered in soot. Yet in Holland, some say that Black Peter gives a very negative image of black people, as being stupid and clumsy. But it should be remembered that the legend of Black Peter doesn't have anything to do with Africa !
The origins of Saint Nicolas

Saint Nicolas of Myra loved and protected children, and yet in European traditions the kindly old man is often accompanied by one or other nasty helper, whose task it is to dole out punishment. What is this all about ? Apparently the Saint Nicolas we know today isn't at all like the real Nicolas of Myra. Experts in ancient traditions have some explanations as to the origins of the character we call Saint Nicolas. Specialists believe that in times past, when pagan populations in Europe were converted to Christianity, these populations tried to find a replacement for the ancient Scandinavian god Odin. The legend of Saint Nicolas was the solution to the problem. Odin travelled about on a horse called Sleipnir, and was accompanied by two crows. Today, the further north in Europe, the more often Saint Nicolas is depicted as travelling on horseback, accompanied by not one, but two Black Peters. In Anglo-Saxon countries, Father Christmas is also called Santa Claus, a deformation of the name Saint Nicolas. This character was a solution to another problem: the problem of the veneration of saints. Protestants were opposed to celebrating Catholic saints, because they did not recognise non-biblical saints. Father Christmas is a layperson who replaced the Catholic Saint Nicolas. But Saint Nicolas had the last laugh, as Santa Claus !

-The feast of Saint Nicolas is not the only festival that Hergé drew. The creator of Tintin also drew pictures for Christmas and Easter. Many of these drawings can be seen at the Hergé Museum in Louvain-la-Neuve.

- Hergé's illustrations have strong Christian themes, which is perfectly normal: the oldest drawings he did of Saint Nicolas, Christmas and Easter, were published in Le Petit Vingtième, the children's supplement to the ultra-Catholic newspaper, Le Vingtième Siècle. But as time went by, the Christian symbols (churches, crosses, nativity scenes, etc.) in his pictures made way for symbols celebrating peace and friendship between mankind generally. Examples can be seen on the covers of Tintin magazine, in the 1960s.

- Hergé's illustrations on the theme of Saint Nicolas also served as advertisements (one of which today decorates the entrance to the Gare du Luxemburg in Brussels) and as the décor in department stores.