The new book entitled Tintin et le Québec, has the subtitle: Hergé et la révolution tranquille (Hergé and the quiet revolution). This seems a rather odd phrase: revolutions are rarely quiet! In actual fact, most modern countries were born from revolutions. But do revolutions always bring about changes for the better?

Tunisia, Egypt, the Ivory Coast, Chad... the world is resounding to the sound of revolutions in 2011! It seems that man cannot live without revolutions. It should be remembered that in the case of Egypt, the regime of President Mubarak was the result of a revolution. On 23 July 1952, Colonel Gamel Abdel Nasser overthrew King Farouk I, whose family had ruled over Egypt and Sudan since the beginning of the nineteenth century. Previously, it was following a revolution against the British that the royal dynasty of Egypt gained independence, in 1922. With a bird's eye perspective it is easy to see that revolutions follow on each others' heels. Many of the countries in Latin America, a place that Tintin visits on so many occasions, owe their independence to revolutions. In these cases it is more accurate to speak of wars of independence, as these nations were previously colonised by Spain. Brazil is the only South American country to have been colonised by Portugal, from which it achieved its independence on 12 October 1822. Since the wars of independence the countries of South America have been rocked by revolutions, often following one after the other in quick succession. 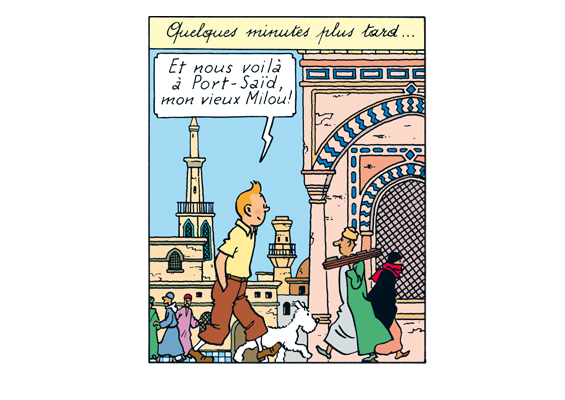 Cigars of the Pharaoh p5 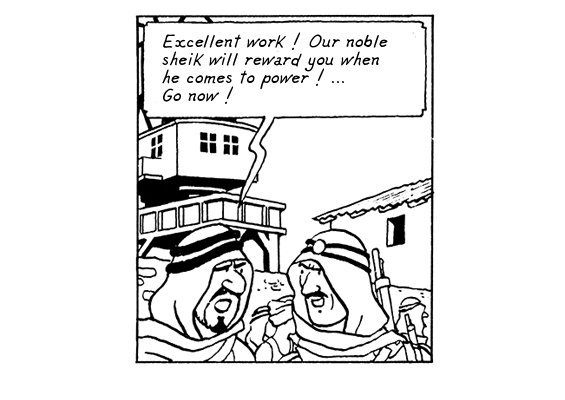 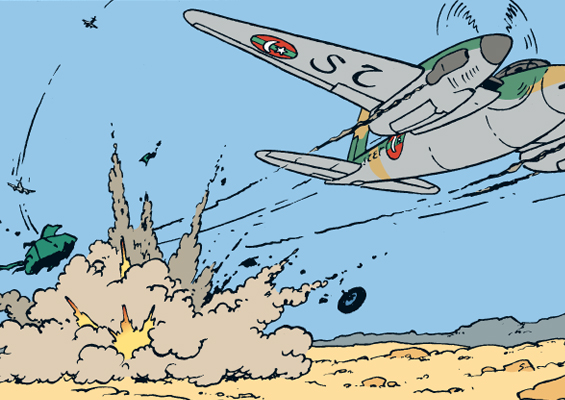 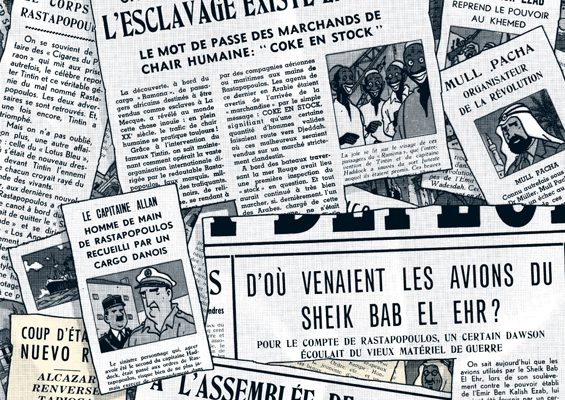 The original definition of the word revolution was 'to roll back', based on the Latin verb revolvere. A revolution is also a movement such as the orbit of a planet around the Sun or a satellite around the Earth. The word can also describe the turning motion of a planet around its axis. An entire life is a revolution! The word revolution can also refer to a complete reproductive life cycle, such as the time between the germination of a tree until the time it sheds seeds that themselves germinate into new trees.

Tintin at the heart of the current Egyptian revolution?

The Adventures of Tintin came to an end in 1976 with the publication of Tintin and the Picaros. How could the courageous little reporter possibly be linked to events 35 years later? By at least three books: Cigars of the Pharaoh (1934), Land of Black Gold (1950) and The Red Sea Sharks (1958). In Cigars of the Pharaoh, Tintin passes by the Egyptian town of Port Said and catches a glimpse of some pyramids somewhere between Giza and the Valley of the Kings, while unearthing the tomb of fictional Pharaoh Kih-Oskh. Land of Black Gold transports the reader to the heart of the Arab-Israeli conflict. The Red Sea Sharks makes clear allusions to revolutions in Saudi Arabia, Jordan, Yemen and in what we call the Middle East. Even though it is now the year 2011, it seems that not that much has changed since Hergé's depictions of these countries in The Adventures of Tintin.

When was the first revolution?

It is very difficult to answer this question, and yet... According to archaeological (the study of the remains of old buildings, structures and objects), anthropological (the study of human beings and their societies) and paleontological (the study of pre-historic life) discoveries, the first societies were small groups of families. These human beings nourished themselves with plants and fruits. Later on they became adept at hunting. They were nomads, moving from place to place according to climate changes, and while hunting for game and searching for fertile land. Slowly mankind began to settle down. People organised themselves into villages and then towns, in which greater numbers of families lived together. For different reasons (family hierarchies, religions, etc.) some held power over others, and this led to the creation of the first royal dynasties. But perhaps the first revolution can be dated even earlier, at the time when man first discovered agriculture and cattle breeding, activities that required the acquisition of permanent dwelling places. Life would never quite be the same again. Isn't that what a revolution is meant to be all about? 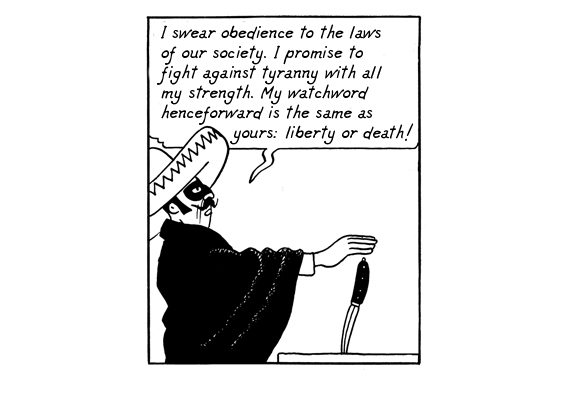 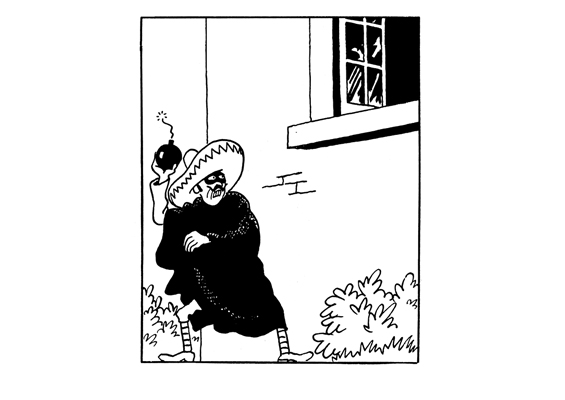 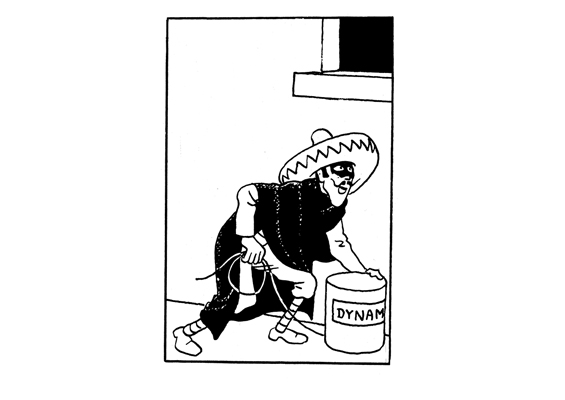 Tintin, supporter of revolutions and revolutionary himself?

As an adventurer and an observer of the twentieth century, Tintin naturally finds himself at the heart of numerous political and armed movements. A résumé:

1929 : 1929: In Tintin in the Land of the Soviets, the reporter for Le Petit Vingtième takes on the Bolsheviks in the ex-empire of the tsars. On 24, 25 and 26 October 1917 Lenin and his troops snatched power and executed Tsar Nicolas II and his family (17 July 1918). The revolution formed the foundation of the Union of Soviet Socialist Republics (USSR), which existed until August 1991.

1935: Tintin arrives in San Theodoros, where revolutions follow one another in quick succession. The Central American republic seems to be more reminiscent of countries further south in Latin America. Hergé could have been inspired by multiple Mexican revolutionary movements. Independent since 1821, the country experienced its first coup d'etat in 1823. The Revolution of Ayutla took place in 1855. Power would again change hands in 1864 when an emperor, Maximillian of Austria, took over. He was overthrown and executed in 1867. And it doesn't end there! 1867: a coup instigated by General Portofirio Diaz. 1911: Francisco Madero leads a coup, and is then assassinated in 1913. Further revolutionaries include Emiliano Zapata (assassinated in 1919) and Pancho Villa, overthrown in 1915 and assassinated in 1923. Many South American countries have followed the same violent and unstable pattern. 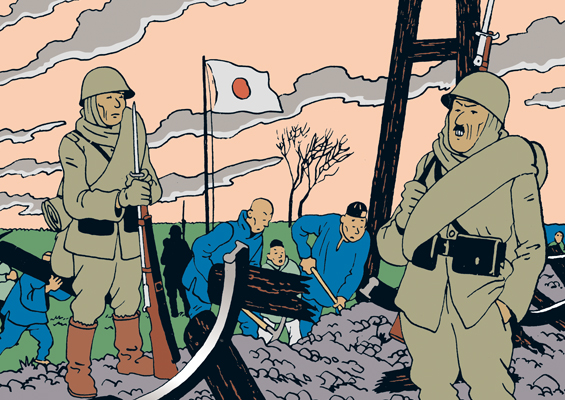 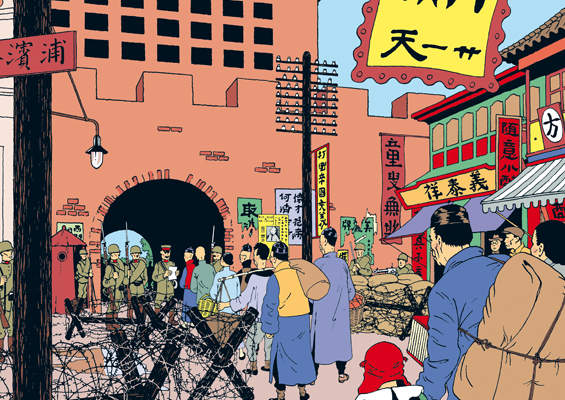 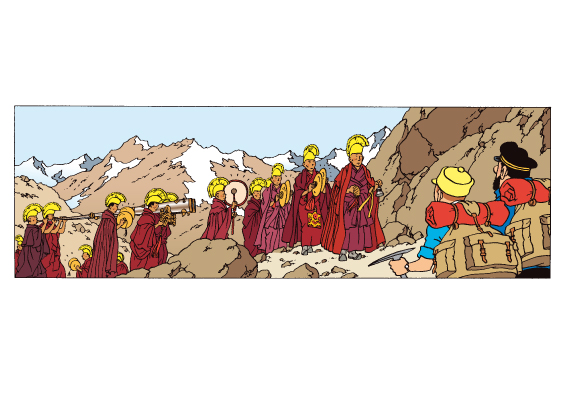 Asian revolutions: Tintin to the rescue?

In The Blue Lotus (1936) Tintin finds himself caught between two revolutions. He arrives too late to witness the fall of the last emperor (1911), after the Double-Ten Day uprising led by Sun Yat-sen (1866-1925), yet he isn't around for long enough to witness the revolution of Mao Zedong (1893-1976), who imposed Communism on China and created the People's Republic of China in 1949. Nevertheless, Tintin gets caught up in the chaos preceding the Japanese occupation (1937-1945). On 17 September 1958, while Tintin in Tibet was beginning publication in Tintin magazine, Tibet  -  the country of the Dalai-Lamas  -  had been occupied by China since 1950. It should be noted that the Tibetans routed the Chinese from their country in 1912, which for some gives rise to a different opinion about the current Chinese occupation and the question of the independence of Tibet. In any case, in the story Tintin is fully focused on rescuing his friend Chang, and has no time to consider the wider political implications of the flight of the Dalai Lama in 1959.

Are we all revolutionaries?

Revolutions come in all shapes and sizes. When talking about China (1966) and Iran (1979), we speak about 'cultural revolutions'. But don't be fooled: these kinds of revolutions often result in more victims that armed revolutions. There are also what are called 'palace revolutions'. The most famous of these is the revolution instigated by Pepin the Short in 751 A.D. The father of Charles the Great overthrew the last 'false king', Childéric III. In 2001, a palace revolution in Nepal was sparked when the entire royal family were massacred! French, Canadians, Belgians, Americans, Argentineans: we are all children of one revolution or another. Sometimes these revolutions rise up against earlier revolutions, which have not delivered what has been promised. This particular revolutionary pattern is evident in Tintin and the Picaros. And don't forget another type of revolution: the revolution inside each and every one of us as we grow and our habits, lifestyles and attitudes change. Living in today's society, where egocentricity is so often the norm, altruism is a revolutionary attitude!