Books et Publications
Published on 03/06/2015
Moulinsart is proud to announce the first-ever digital Tintin book to be published in English!
The series launches with Tintin in the Congo, a story which has been in the news over the past few years and which is today deemed controversial by some and set aside from the rest of the adventures for this reason.
The release of this digital book is also special as it includes a new translation!
The rest of the albums will be published as they are translated. The frequency of publication will be confirmed at a later date.
This new publication is accompanied by a 13-page bonus section, available via the options menu of the Tintin app. The album is also being published at a higher resolution than the previous French-language digital publications (33% increase in resolution for iPad: 1536 px x 2048 px; and iPhone: 1280 px x 1920 px).
A NEW TRANSLATION BY MICHAEL FARR
The publication of The Adventures of Tintin in the United Kingdom goes back many years. In 1952 appeared the first two Tintin books in English: The Secret of the Unicorn and Red Rackham's Treasure. The titles were published by Casterman; they were not successful in bookshops.
It was then not until 1958 when the titles King Ottokar's Sceptre and The Crab with the Golden Claws were published by Methuen. This time Tintin in English was here to stay: the care taken by Leslie Lonsdale-Cooper and Michael Turner as they translated the French into English, and favourable reviews by The Times newspaper, propelled Tintin to success.
The work of translating the entire series was a monumental labour of love. It is difficult to fathom the atmosphere, the spirit and the multi-faceted humour that suffuse the thousands of frames and speech bubbles of The Adventures of Tintin.
Over a period of decades from the 1950s to the end of the twentieth century, the two translators worked to complete the series, always careful to respect the universe of Hergé while at the same time paying attention to the different perceptions of their audience and to the particular ways in which words, sounds and meanings are weaved together in English.
Leslie Lonsdale-Cooper and Michael Turner accomplished their mission with flying colours. But we all know how fast the world evolves and how life moves on; the same thing goes for language and literature. The Adventures of Tintin have also not escaped the flow of time.
The challenge of updating the English-language Tintin books with a new translation was taken on by the well-known Tintin specialist, writer and journalist Michael Farr. Farr drew on his intimate knowledge of the work of Hergé and revisited the expressions, dialogue, word games and references – even Captain Haddock's swear words – to bring the best to a new translation.
The spirit of Tintin, so palpable in the language of Molière, remains omnipresent in that of Shakespeare.
5 JUNE
By publishing the digital version of Tintin in the Congo on 5 June, we also want to commemorate the anniversary of the first appearance of this story in Le Petit Vingtième. 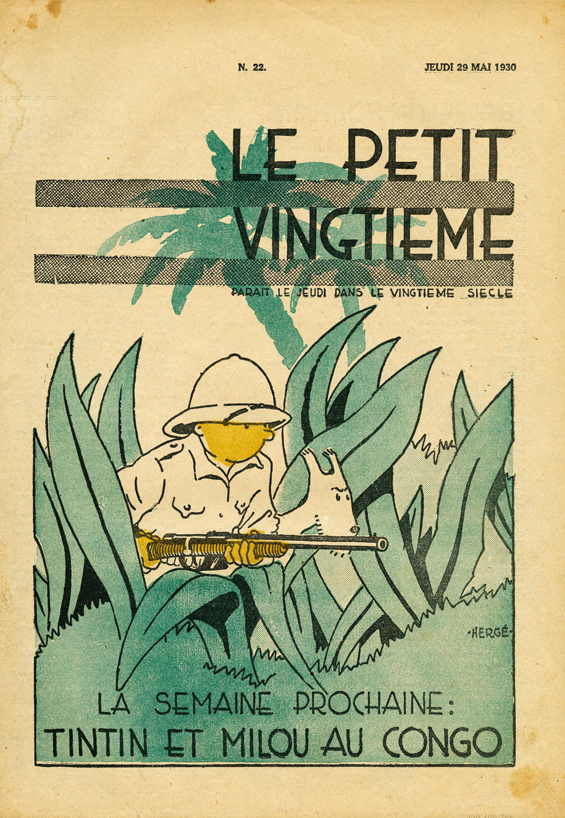 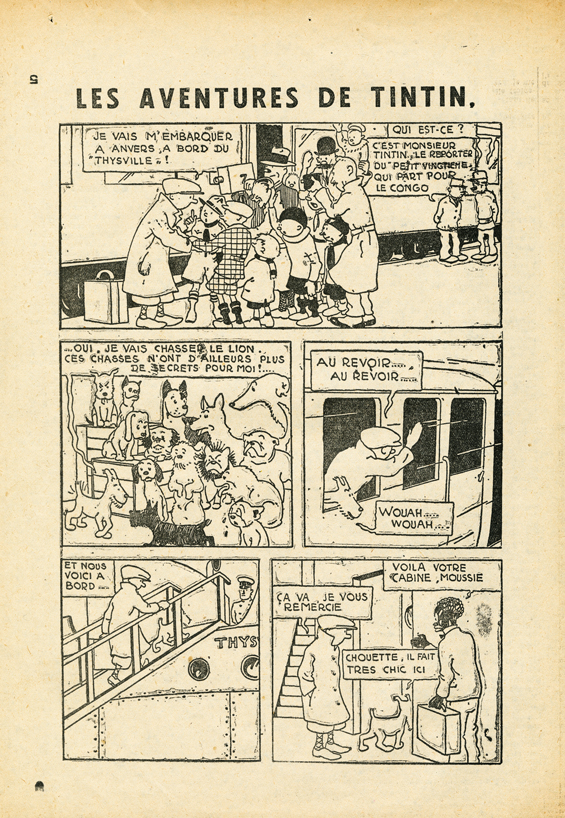 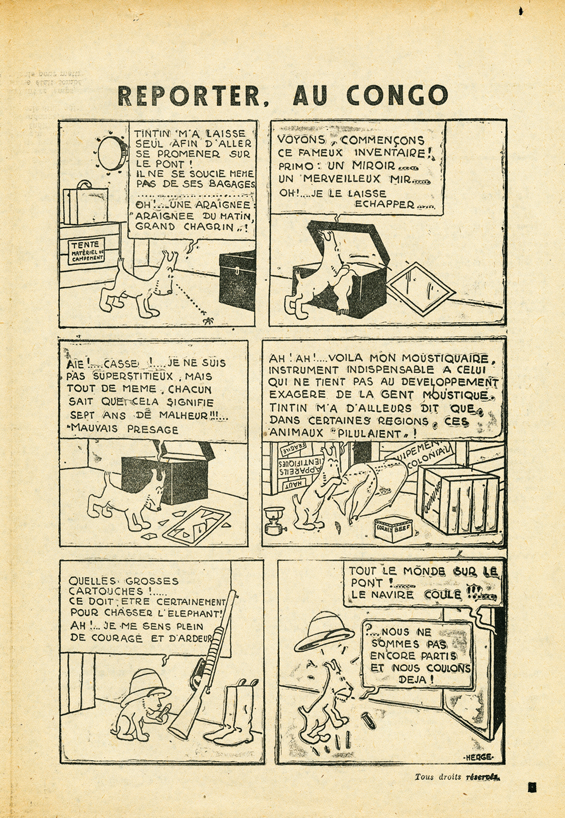 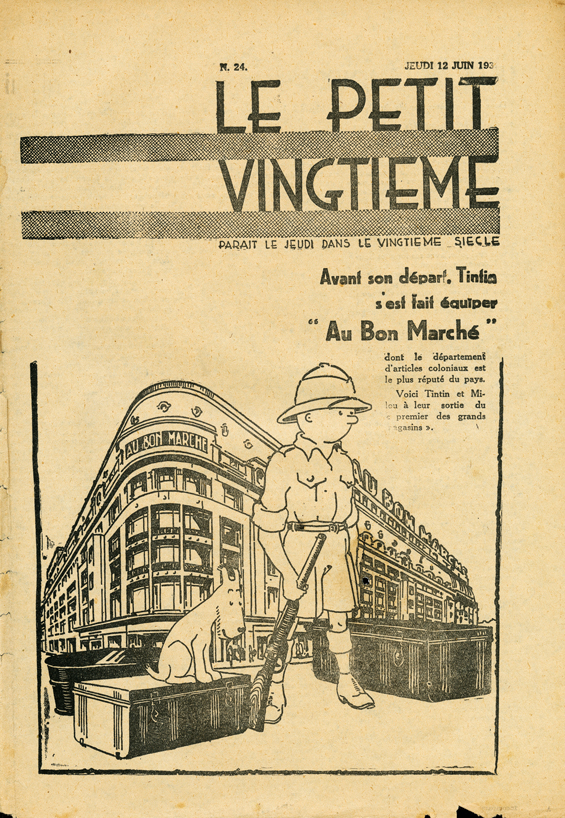 85 YEARS OF TINTIN IN THE CONGO
Tintin in the Congo was first published in Le Petit Vingtième on 5 June 1930. The story was published as a book on 9 July of the following year. The first version, in black and white, was a resounding success; nine reprints were made up to the year 1942. The story was completely redrawn for the 1946 colour version, which to date has been one of the most popular albums of the entire series.
The little reporter's peregrinations in the Belgian colony have also been subject to controversy and incessant criticism denouncing the supposedly racist and overtly colonialist theme of this African adventure. One thing is certain: The Adventures of Tintin, Reporter for Le Petit Vingtième, in the Congo (the original title of the story) reads like a work of propagana supporting Belgium, which on 15 November 1908 had become responsible for a territory 24 times larger than herself.
The Belgian people were proud of their colony and they eulogised the first explorers, missionaries, businessmen, army officers and civil servants who contributed to the “Great work of civilisation being undertaken in Central Africa.”
Leaders of the Belgian Catholic Church were on a mission: to save souls in Africa. The native population was to be converted and the fight against paganism and witchcraft brought to Africa herself. This ethos was something that the team managing the newspaper Le Vingtième Siècle and its supplement Le Petit-Vingtième naturally adhered to. Hergé and his star character followed suit.
From our position at the beginning of the third millenium it is difficult to grasp how much passion and enthusiasm the exploration and colonialisation of Central Africa evoked among Europeans, and how their imaginations were kindled by the thought of Africa.
A paradox would come at the end of the 1960s, when Tintin in the Congo enjoyed a surge of popularity in Zaire (the name of The Congo during the years of Marshal Mobutu) at the same time as it began to become a source of controversy and even shame to a European public who were watching the decolonialisation of Africa happen in front of their very eyes. A Kinshasa magazine began to publish the story from 29 December 1969. The editor of the magazine justified the publication of Tintin in the Congo by saying that, “Although some of the caricatures of the Congolese in Tintin in the Congo may make white people smile, they make the Congolese themselves laugh out loud because they find plenty in the crude and two-dimensional perceptions of white people, to mock them about!”
Still today Hergé's story provokes comments and controversy... which does not appear to hinder its distribution around the world.
In 2015 Tintin in the Congo should be read above all as the product of a bygone era, as evidence of a world in which colonial and paternalistic ideas about African people were commonplace.
Along with careful explanation, the book can even serve as a tool in the education of future generations. Placing a Tintin adventure in its historical context, and reading it as a reflection of the mentality of the time in which it is set, presents a great opportunity for parents and teachers.
MICHAEL FARR
Michael Farr was born in Paris in 1953. After his secondary school studies in Great Britain, he obtained a scholarship for Trinity College in Cambridge, where he studied theology and later fine art.
Hired as foreign correspondant for Reuters, Farr lived and worked in Paris, Frankfurt, Brussels (where he met Hergé in 1978) and Bonn.
In 1979 he joined the Daily Telegraph and was sent to Africa. Two years later he returned to Germany, where he was the Telegraph's principal reporter until 1987. During this time he undertook diverse missions and covered stories in ex-Soviet Union territories and Eastern Europe. Farr was present at the fall of the Berlin Wall and closely followed the break up of communism.
Michael Farr wrote about his experiences in a book entitled Vanishing Borders, the Rediscovery of Eastern Germany, Poland and Bohemia, published in Great Britain by Viking/Peguin. In 1992 Farr's book was shortlisted for the Thomas Cook travel book prize. He then went on to write and publish Berlin! Berlin! Its Culture, Its Times with publishers Kyle Cathie.
Farr is also well-known in the field of works dedicated to Hergé. In 1989 his book Tintin, 60 Years of Adventure was published by Methuen.
Working as a translator, Michael Farr has also collaborated on several studies, notably Tintin and the World of Hergé by Benoit Peeters (Methuen) and Hergé and Tintin Reporters by Philippe Goddin (Sundancer).
Michael Farr's best-seller, Tintin, The Complete Companion (2001) has been translated into many languages including French, Spanish, Japanese, Dutch and Swedish... his readers also enjoy Tintin and Co, his wonderful study of the star characters from the Tintin series, and his biography of Hergé entitled The Adventures of Hergé, Creator of Tintin (2009). 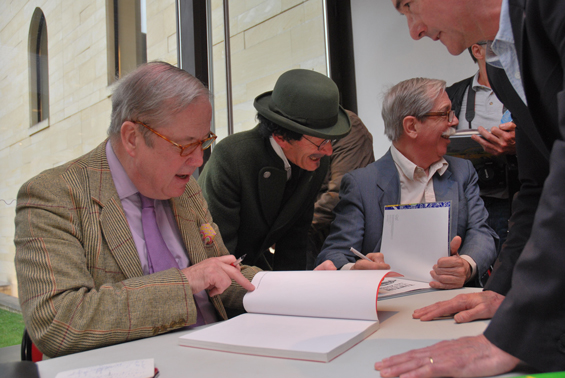 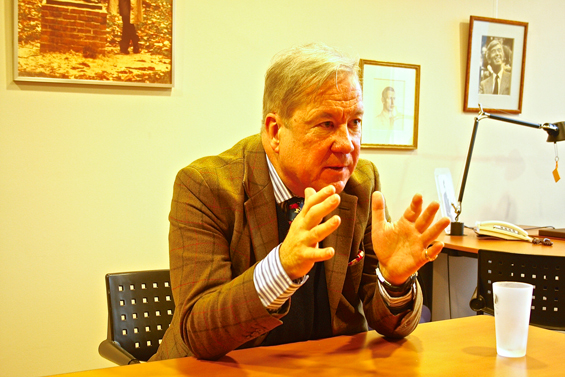 An interview with Michael Farr, made to mark the launch of the digital Tintin book series, complete with new translations :
Lost in translation - why a new translation? (audio - 3m59) :
Snowy versus Milou (audio - 1m35) :
Tintin in the Congo (audio - 2m58) :
JOIN US! Download the app and set off on the adventure! In the future the service will be developed to include rich multimedia content, helping fans to discover multiple facets of the work and art of Hergé.