The adventures of the Tintin figurines

THE STORY OF THE OFFICIAL COLLECTION

NEWS
Today, the collection of Tintin figurines that launched in 2011 is arriving at completion. This is a great opportunity to thank fans and customers, and to express how exciting it has been for us to share this 3D series with you. The collection has allowed us to experience and enjoy The Adventures of Tintin in a completely new way, notably thanks to the booklets that accompany the figurines. The positive reaction to the collection has been overwhelming and again, we would like to thank all our fans for their loyalty.

Vote for your favorites figurines

We have lost count of how many requests we received from customers wanting to know how many figurines would be in the series. Now you all know that the collection stops at number 111. With the series drawing to a close, it is the perfect time to let our fans behind the scenes to discover, with the help of designer Nicolas Preumont, how so many pen-and-paper characters were reborn in three dimensions.

The collection would not have been possible without the partnership of TF1, who promoted and distributed the miniature works of art.

WHICH CHARACTER IS THE MOST POPULAR?

The figurines are very well crafted and remain faithful to Hergé's original drawings. With this in mind it would be really interesting to find out which model is the most popular. Is it Tintin, Snowy, or someone else?
Cast your votes!

INTERVIEW
Nicolas Preumont answers our questions.
1. How did the collection begin?
The starting point was the wish to create a collection at an accessible price for the public, built nonetheless using techniques normally reserved for top-quality collectibles (resin figurines).
At the outset we envisaged the collection comprising 77 figurines in total, but it turned out to be so successful that a prolongation was decided upon. We added more secondary characters, some of whom had never been modelled before. This is how we arrived at a collection of 111 figurines plus 9 extra special editions, which makes for a wide and unique collection.
2. The figurines are very faithful to the original drawings in the details such as positioning and expressions. What were the technical challenges you faced when creating them? 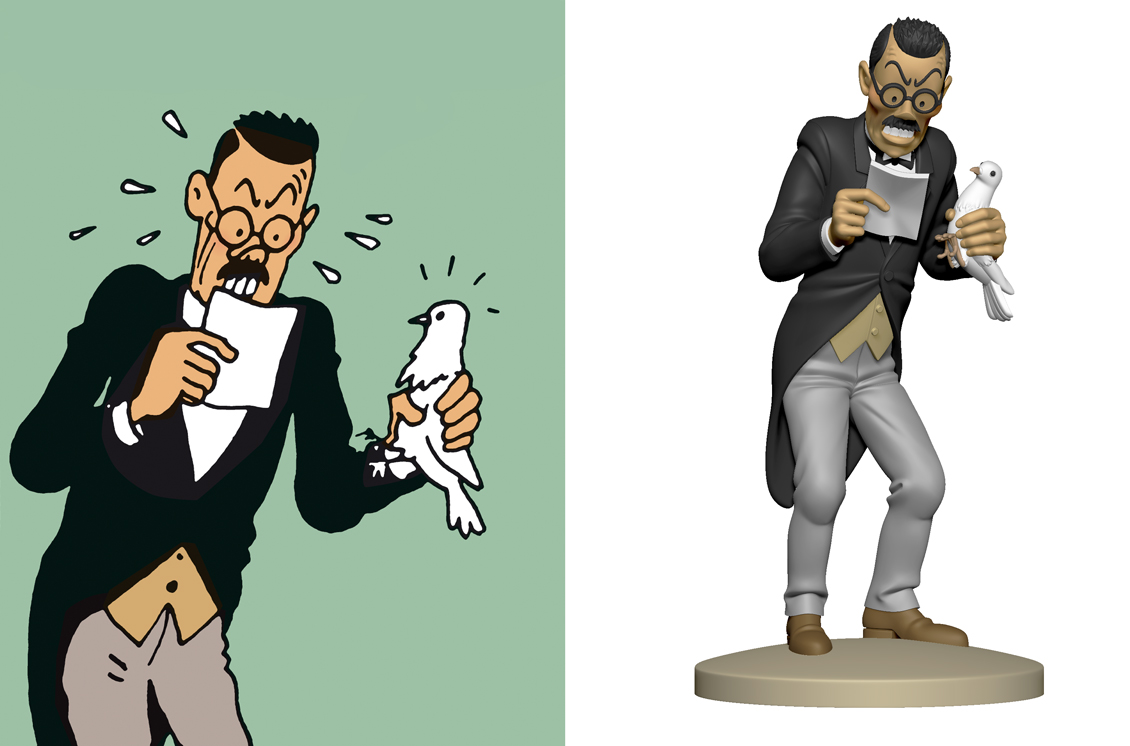 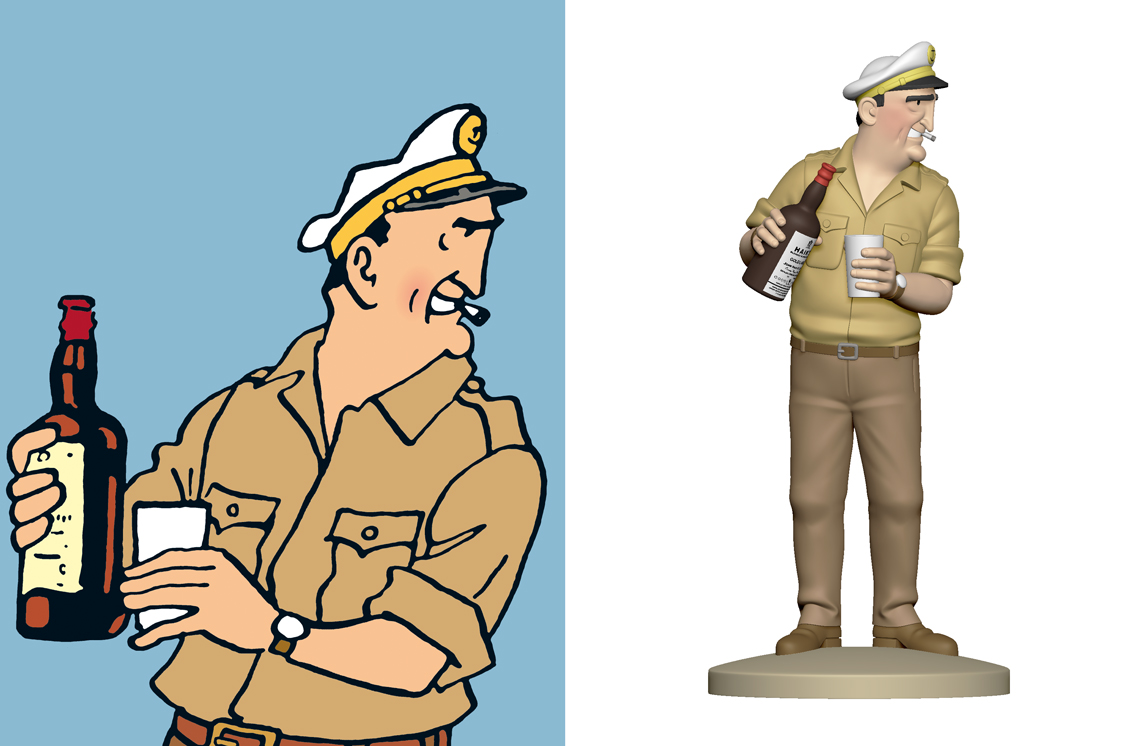 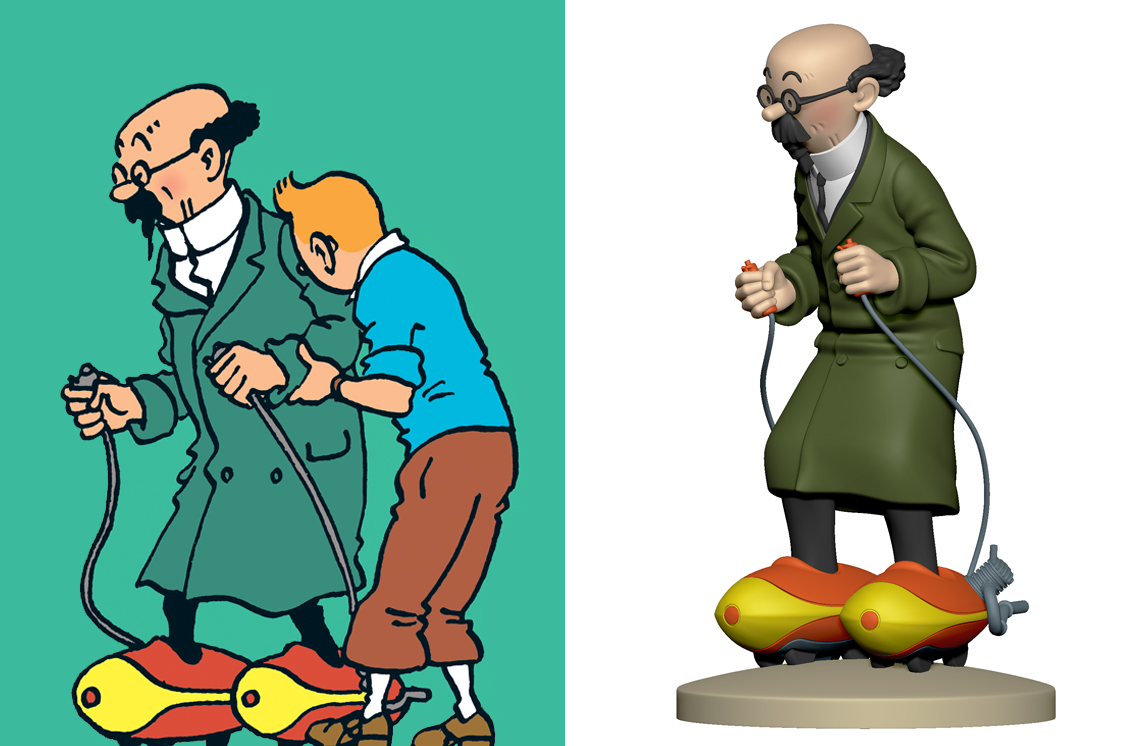 The best way to approach the creation of this type of collection is to maintain deep respect for the original.
Beyond being decorative pieces, what is the function of these statuettes? They offer people a way to connect with their memories of reading the adventures, memories that often come from childhood. It is crucially important therefore to remain as close as possible to the original work.
My work is akin to that of a translator because to carry out the work there has to be a transition from one medium to another – from drawing to volume – with each medium being like a separate language. To translate accurately one must have a firm grasp of both languages.
My experience with the Tintin car collection (2000-2007) was very useful. To create the 300 different characters which appear in the 1:43 scale cars, I had to experiment and put together a specific 3D sculpture process because at such a reduced scale (the characters measured 3 cm) traditional techniques were not able to achieve the required level of quality. This process was refined over the years; today it has become a precise tool in the creation of Tintin figurines.
The different states of creation:

1) Choosing characters and the drawings which most accurately express their personalities
2) Creating digital 3D sculptures
3) Dissecting the designs for moulds (separation of parts and addition of joining pieces)
4) Creating the colouring instructions
5) 3D printing of the master copy to send to the factory
6) Quality control of prototypes
3. While creating the collection was there a particular figurine with which you were especially pleased? If so, which one and why?
Maybe Peggy Alcazar...
No, seriously, each figurine is interesting.
From the humble stonemason to the Milanese Nightingale, this portrait gallery of figurines represents an amazing character study.
It is a great pleasure to follow in Hergé's artistic footsteps, to become part of the clear line, of the minimal strokes required to outline a character.
If I really had to choose one it would be Rascar Capac for the “Walking Dead” theme!
4. Perhaps some of the characters imagined by Hergé as less difficult to recreate than others, but in any case from looking at the precision in the figurines it is clear that meticulous work has gone into each and every one. What do you have to say about this?
The details are part of the story. Clothes, accessories or postures... each element is useful for evoking a character who is instantly recognisable. It is the art of caricature, the art of Hergé. There should be no skimping of detail.
The medals adorning the uniforms of General Tapioca and Colonel Alvarez instantly mark them out as dignitaries of the best banana republic in the world; everything about Peggy Alcazar – from her flower-shaped hair curlers to her cigar to her blue Converse and clothes – screams bad taste; Red Rackham's arrogance is plainly visible with his raised cup, booty box under his arm and plumage; General Alcazar's proud nature is palpable from his posture, outlined by his blue uniform. The identity of each character is in the details.
5. Sometimes complexity is important – I'm thinking of figurine 104 of the series: Dr Krollspell. Were there any figurines which presented particular difficulties for you?
The special edition figurines presented particular technical and artistic challenges. Unlike many of the other figurines in the collection, which portray static scenes, each special edition portrays a dynamic scene of movement with accessories and multiple characters. The question was how to translate the horse's galloping, how to define the camera tripod, the bicycle, the motorbike, the black patches on the mastiff's fur, etc.
But above all, we had to work to very tight deadlines for the special editions. The planning for the rest of the series was already tight, so when the special editions were decided upon the time I had to spend on each figurine went from 8 to 6 days, when taking into consideration all the necessary stages (sculpture; dissection; colour instructions; prototype quality control). The last two years have been pretty intense.
6. There are an estimated 325 characters in The Adventures of Tintin. Could the series have gone on for longer?
Of course, but these decisions are for the commercial department to take in discussion with the partner. Personally I would have been up for continuing, given that there were some characters who would have been popular additions. But you also have to know when to stop... and the display boxes and shelves of collectors only have so much space!
7. Some key characters were portrayed several times in the collection. Among the baddies, who appears most often and why were they chosen?
The strength of this collection is in the portrayal of many secondary characters who have never before been cast as figurines, notably a range of baddies who we love to hate and who are crucial to the stories' success.
Among these characters, Doctor Müller and Rastapopoulos stand out. They are characters who cross Tintin's path on multiple occasions. They disguise themselves with different identities and clothes. Respectively they had to be portrayed in at least two of their various appearances.
8. The terrifying mummy of Rascar Capac, the emblematic character from The Seven Crystal Balls, also figures in the collection. Despite being out of the context of the story, the figurine still exudes a frightening aura. How did you manage to preserve this aspect of the character?
It was important to get this figurine, who portrays every child's worst nightmare, just right. His deathly-thin body had to be perfect and his terrifying grin. including his lower jaw without teeth, also had to be faultless. Above all the little bright points in the middle of his deep eye sockets follow you with menace.
9. Have you had feedback from collectors?
I have not had direct contact with collectors but throughout the adventure I followed closely the websites used by collectors. Some forums are extremely popular (more than 750 pages for the most popular site).
Over the five years it took to create the collection, these online discussion spaces were filled with debate, argument, intense exchanges, expressed desires, little life stories, regrets and also some praise. Friendships were even created thanks to these figurines.
This collection was a great adventure that once again proves that Tintin is alive and kicking.

A HUGE CAST OF CHARACTERS

Hergé's cast of characters is 325-strong, all issuing from the Tintin canon – the 22 colour books (from Tintin in the Congo to Tintin and the Picaros, not including Tintin in the Land of the Soviets and Tintin and Alph-Art). The good and bad masculine characters are more well-known and more numerous, but there are also female and child protagonists in The Adventures of Tintin. 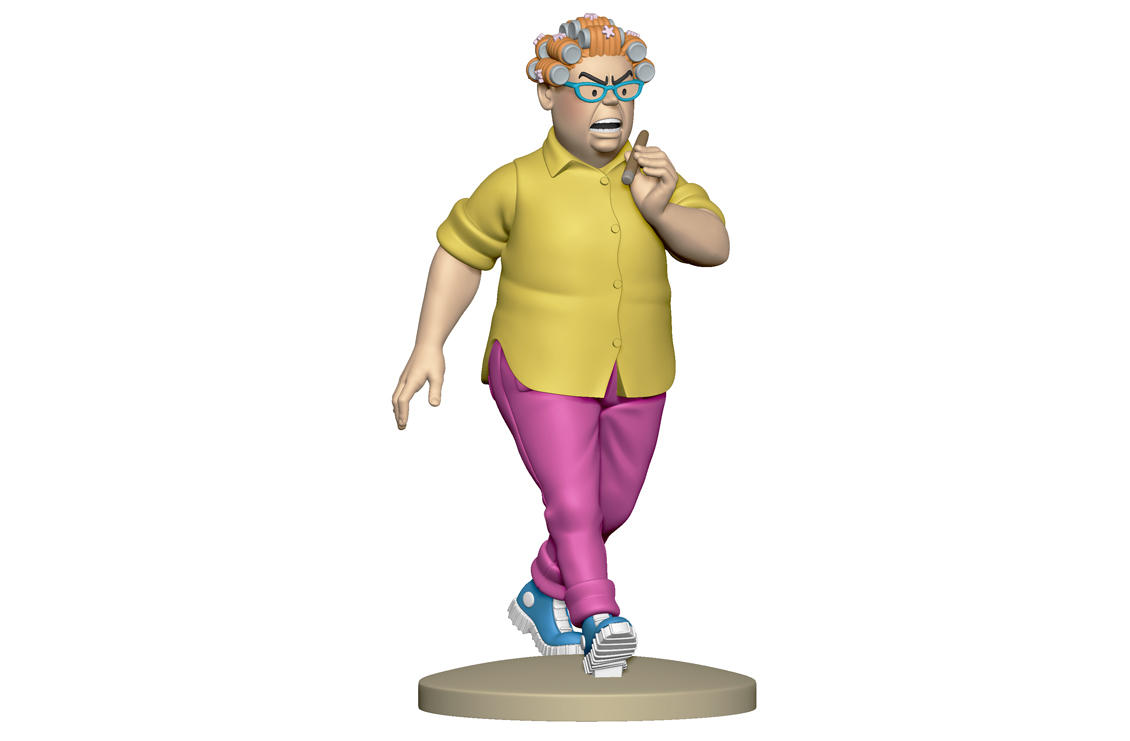 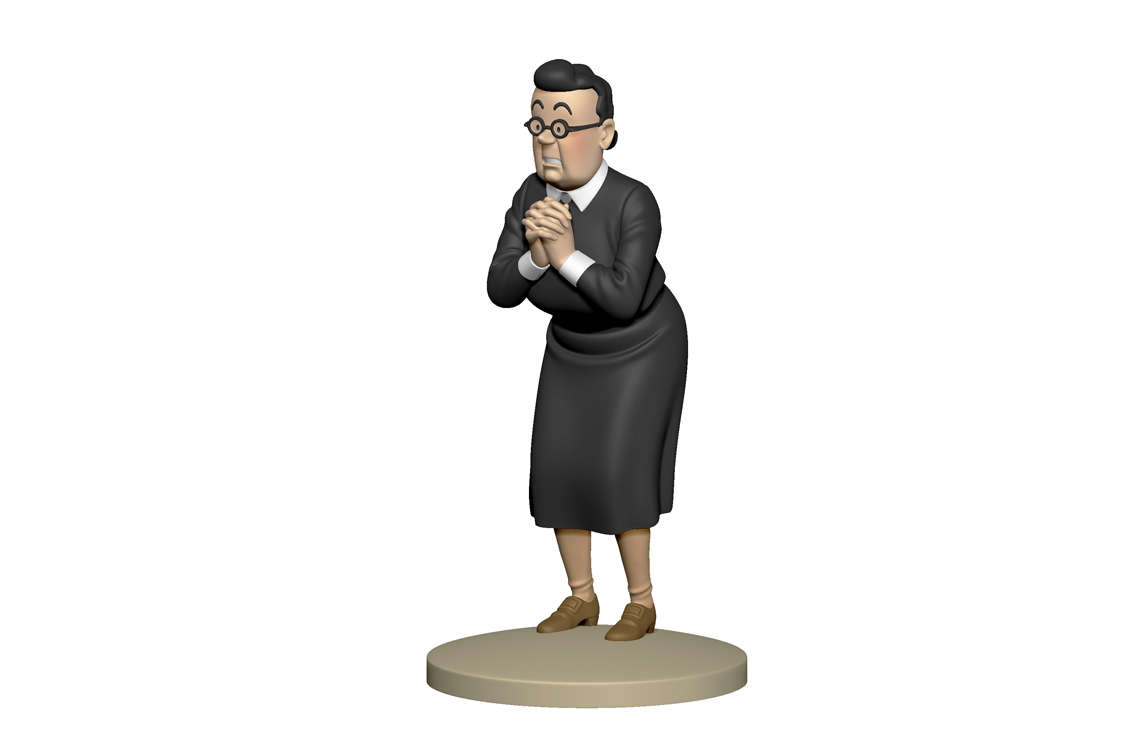 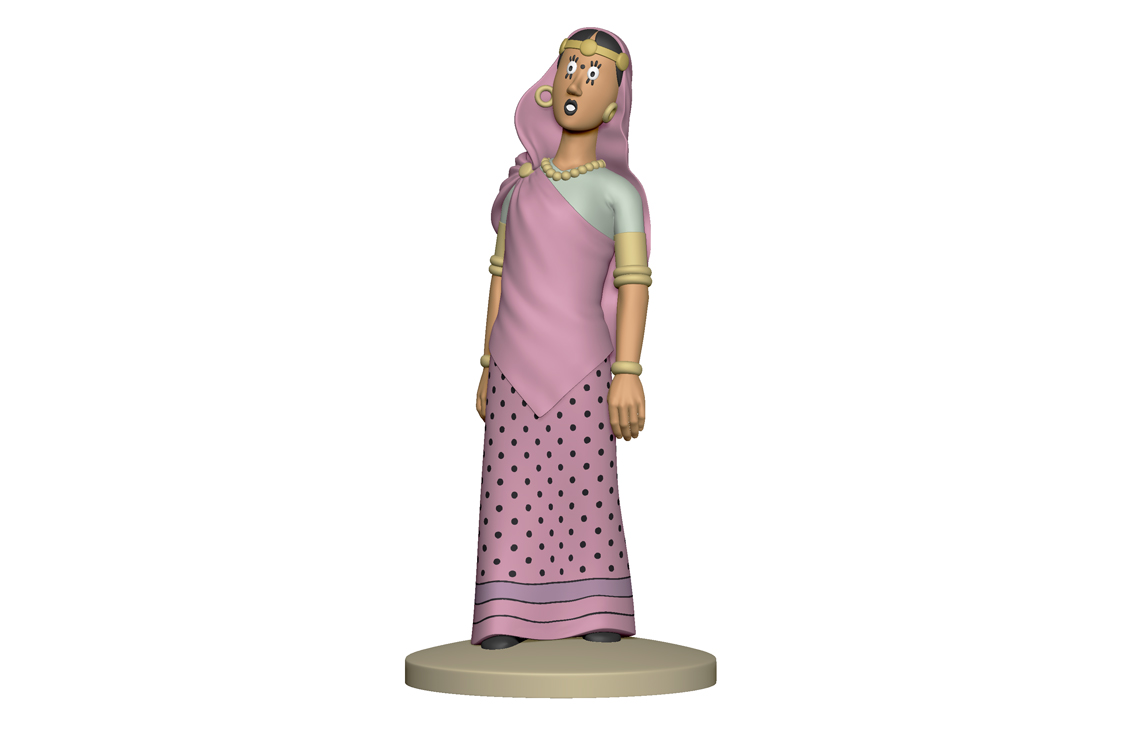 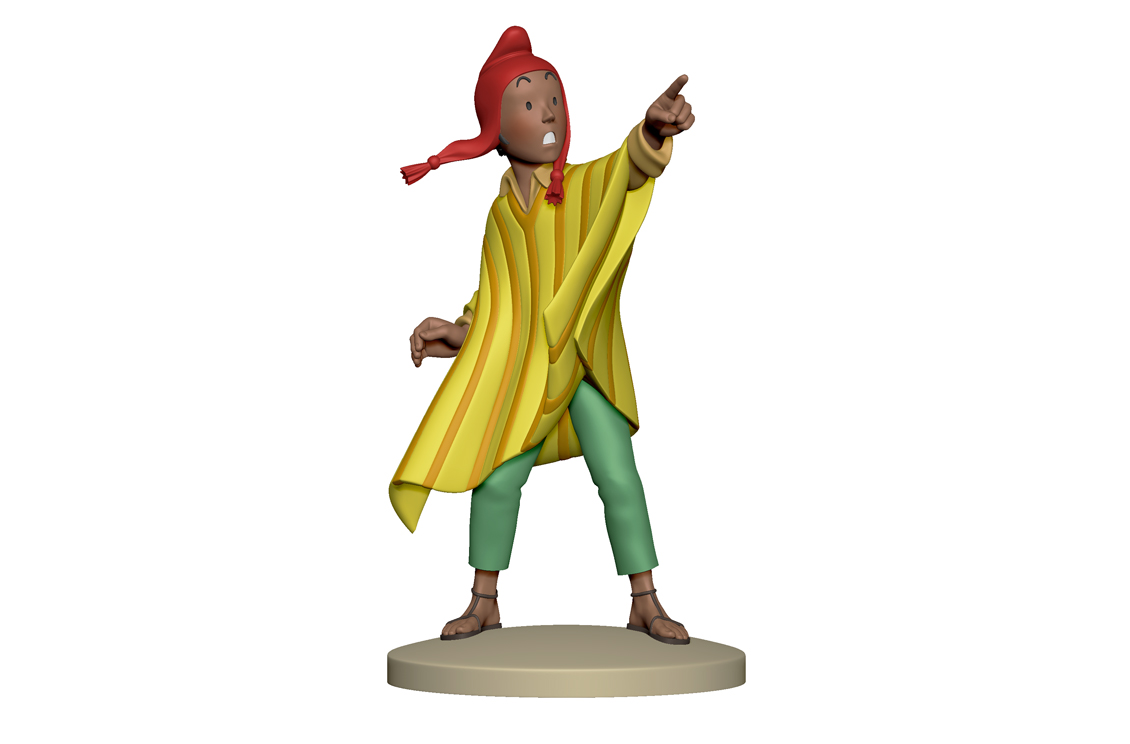 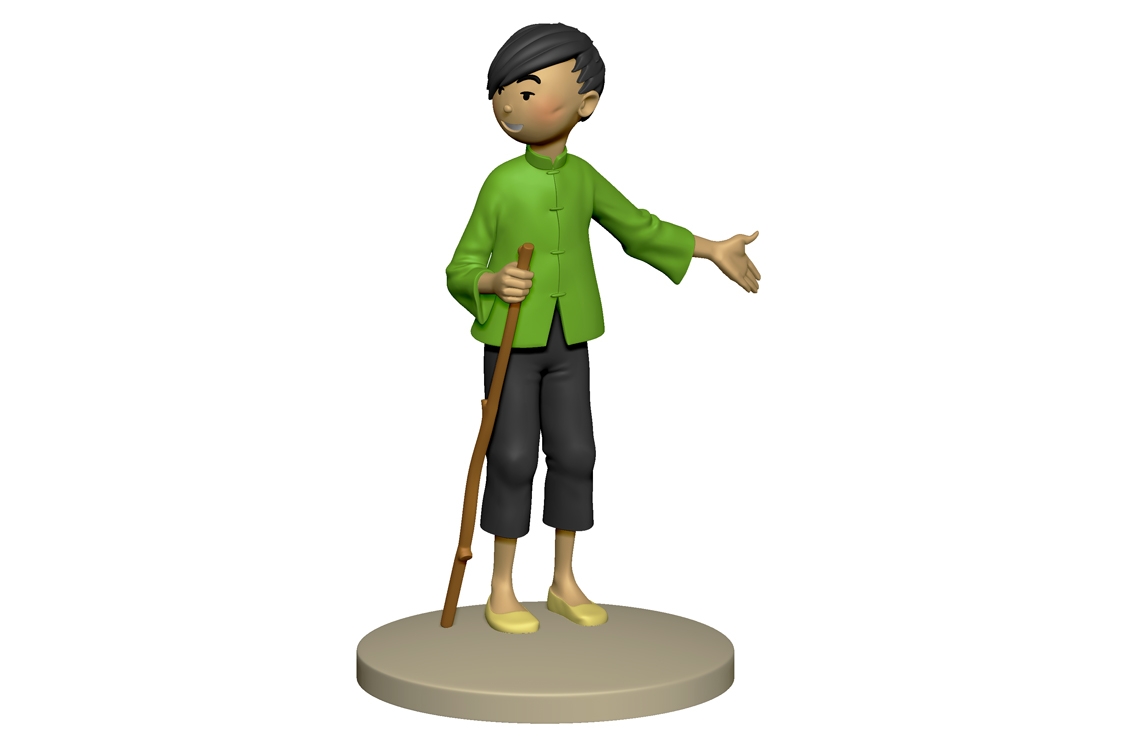 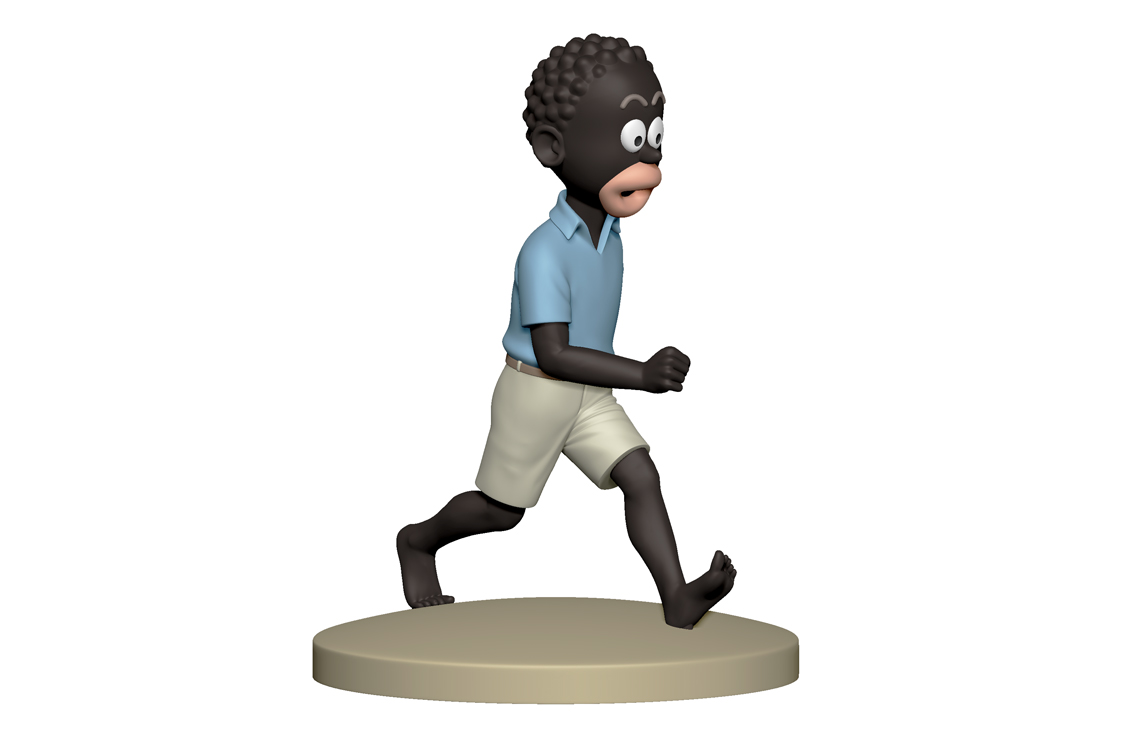 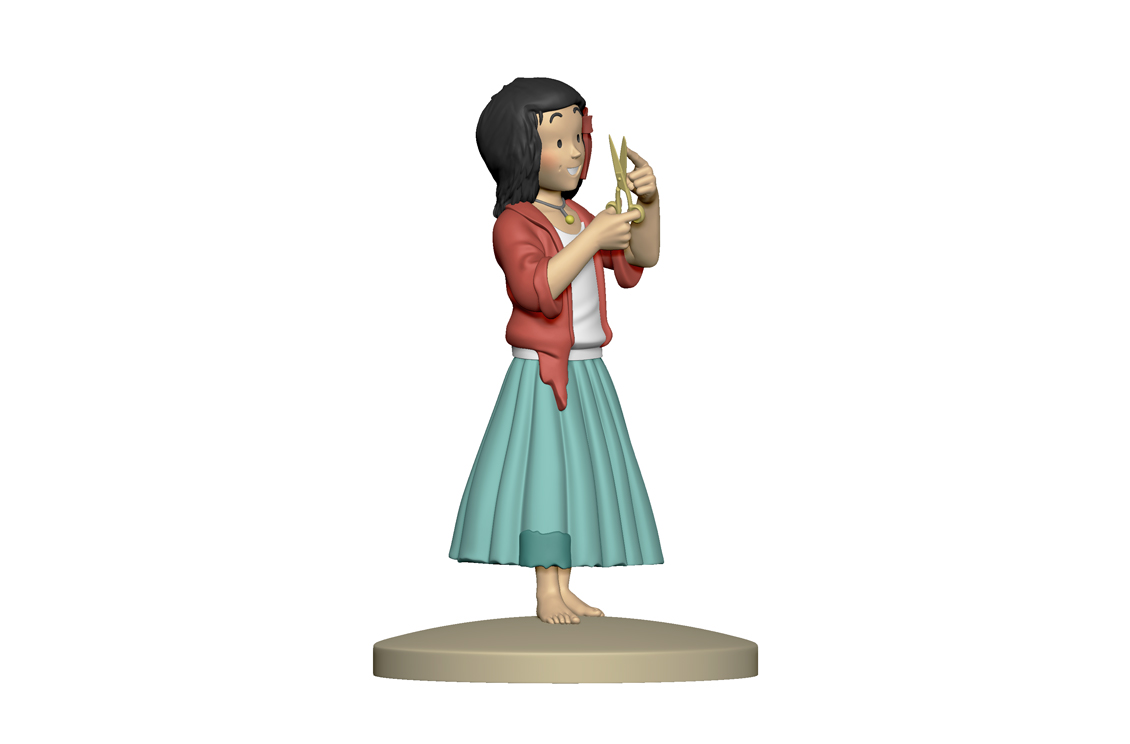 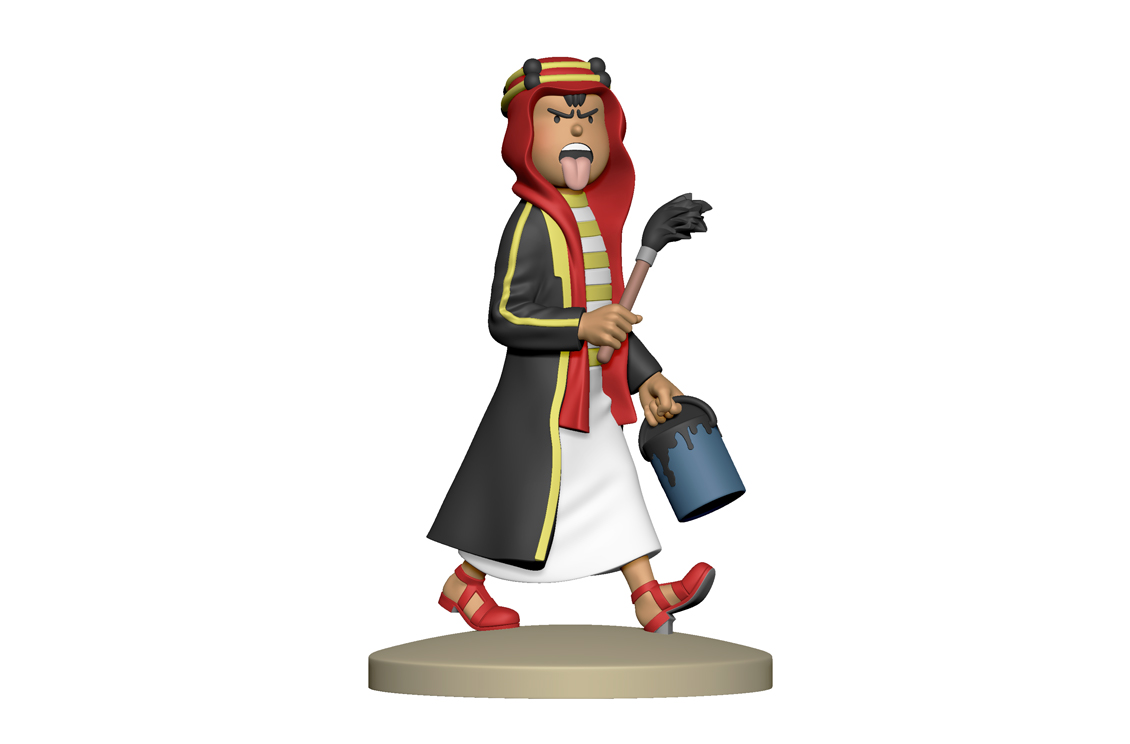 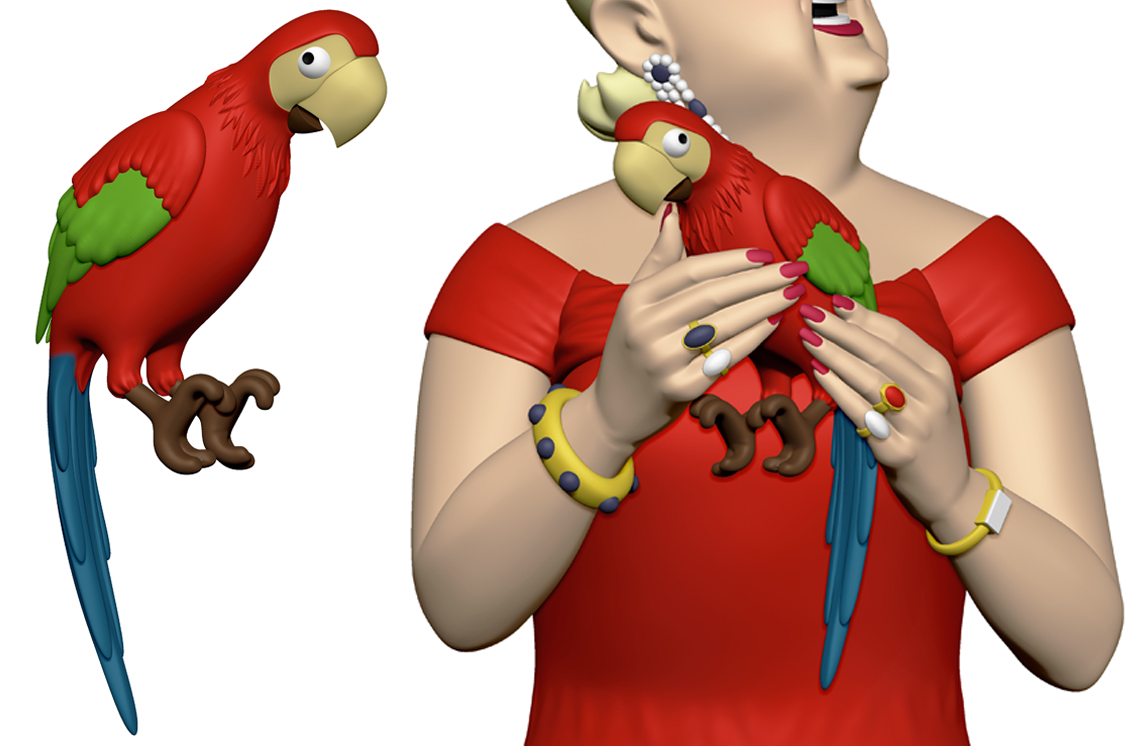 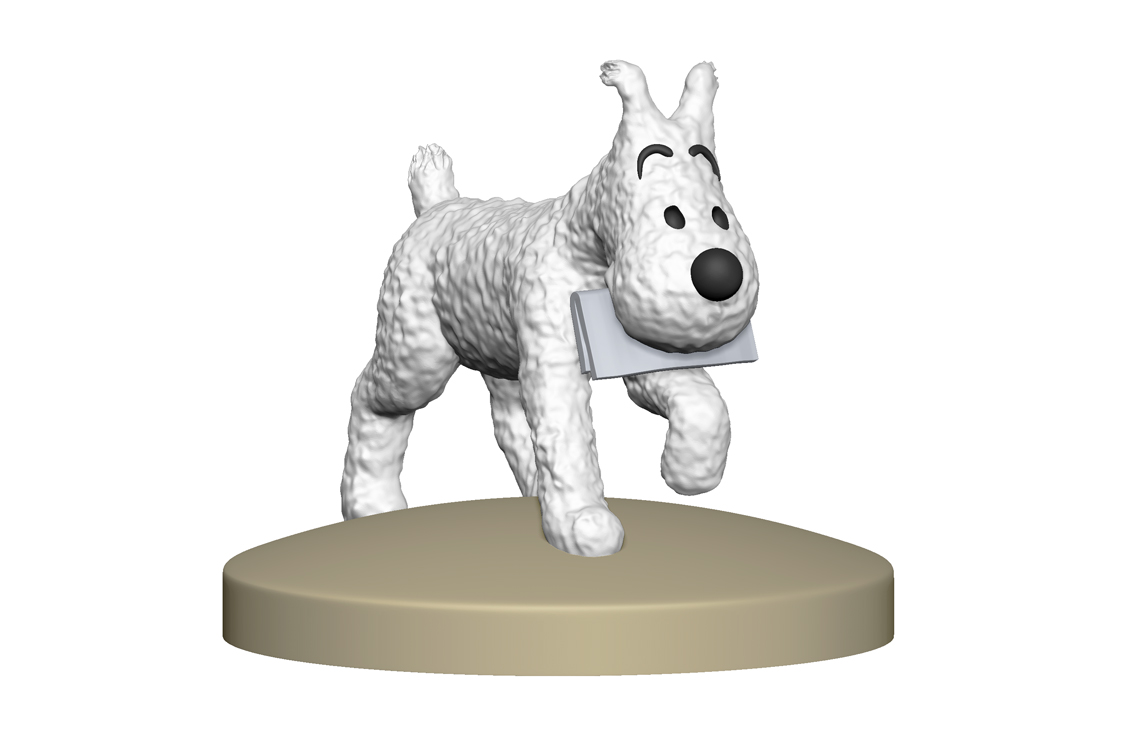 Although less present than humans, in Hergé's stories animal characters occasionally prove to be key to the plot.
CONCLUSIVE STATISTICS