The great adventure of "Tintin" magazine

To mark the publication of a 777-page book that dives into the amazing adventure of "Tintin" magazine, Tintin.com reviews the history of the magazine.

“Brussels, Thursday 26 September 1946. A young boy by the name of Roger Goens had two good reasons to smile. Firstly, he had just been with his mother to a screening of the Walt Disney feature-length cartoon Pinocchio, at the Eldorado Cinema on the Place De Brouckère. Secondly Roger, along with the rest of Belgium, was ecstatic that day about the launch of a new children's magazine entitled Tintin. The launch had been set back by a week from19 September but who cared – it was now happening and the excitement among Belgian children was palpable. On the town square a kiosque displayed dozens of copies of the magazine, held to a stand by clothes pegs, and the seller brandished one of the copies proudly. On the front cover the new logo was displayed in all its bright colour and glory, showing the brave reporter and a bold black title on white background in the unmistakable font, with a striking full-page illustration made by both Hergé (characters) and Edgar Pierre Jacobs (décor). The picture evoked the new Tintin adventure Prisoners of the Sun. To top it all, the weather was perfect that day, hot for the season with temperatures around 25 degrees. Roger got his copy of the first issue along with thousands of other happy children, acquiring it for the price of 3,50 francs instead of the 3-francs price originally intended but then increased to cover the extra costs involved in making the magazine top-quality.”
(Source : Dominique Maricq, Le journal Tintin, les coulisses d’une aventure, Editions Moulinsart, (2012), 2ème ed., p.16)

Tintin to the rescue

Over the 1950s and 1960s, the weekly Tintin magazine and its main rival Spirou were a primary source of entertainment and knowledge for children.
From the outset the team strove to find a balance between drawings and texts. All genres and styles were included.(page 19).
In the magazine named after him, Tintin was king and had his place on the front cover and often in the double-page spread in the middle of the magazine. There is no point being modest: the full-colour magazine was of an artistic and editorial quality that surpassed its rivals!
Tintin himself played a key role, signing the editorial section which introduced the content and the menu showing the series and columns of the magazine.
The magazine was an instant hit. It was packed with the top series, stories and characters. It was a time when not everyone had a television and the magazine was handed around among the family and neighbours; among young people from the age of 7 to 77 years old (as the slogan went)! And unlike television the “screen” never went foggy or distorted, and every Thursday Tintin magazine came out in colour, not in black and white. 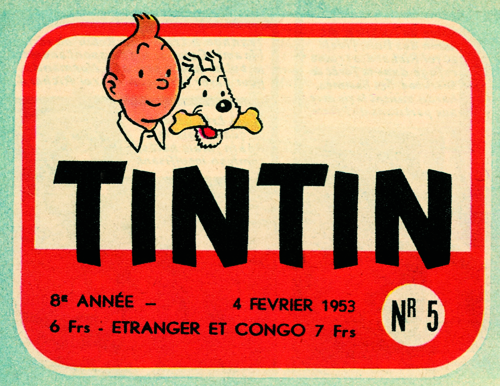 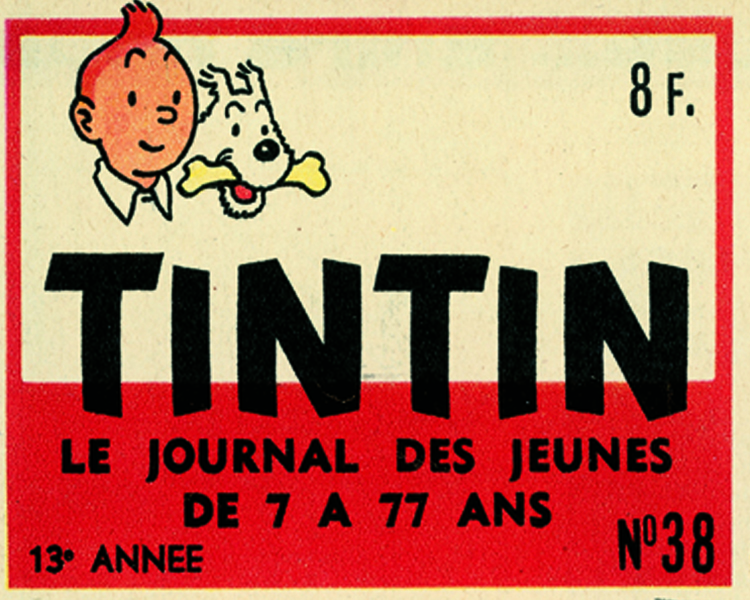 The phenomenon of French-language children's magazines goes back to the beginning of the twentieth century with a plethora of titles such as Le Petit Français illustré (1889), La Semaine de Suzette (1905), Le Petit Illustré (1911), L’Épatant (1908), Cri-Cri (1911), Lisette (1921), Le Petit Vingtième (1928), Le journal de Mickey (1934), le journal de Spirou (1938), and Bravo (1940). The golden age continued after the Second World War with new titles coming out and prolonging the craze for magazines full of images and fearless heroes.
For more information, click here! 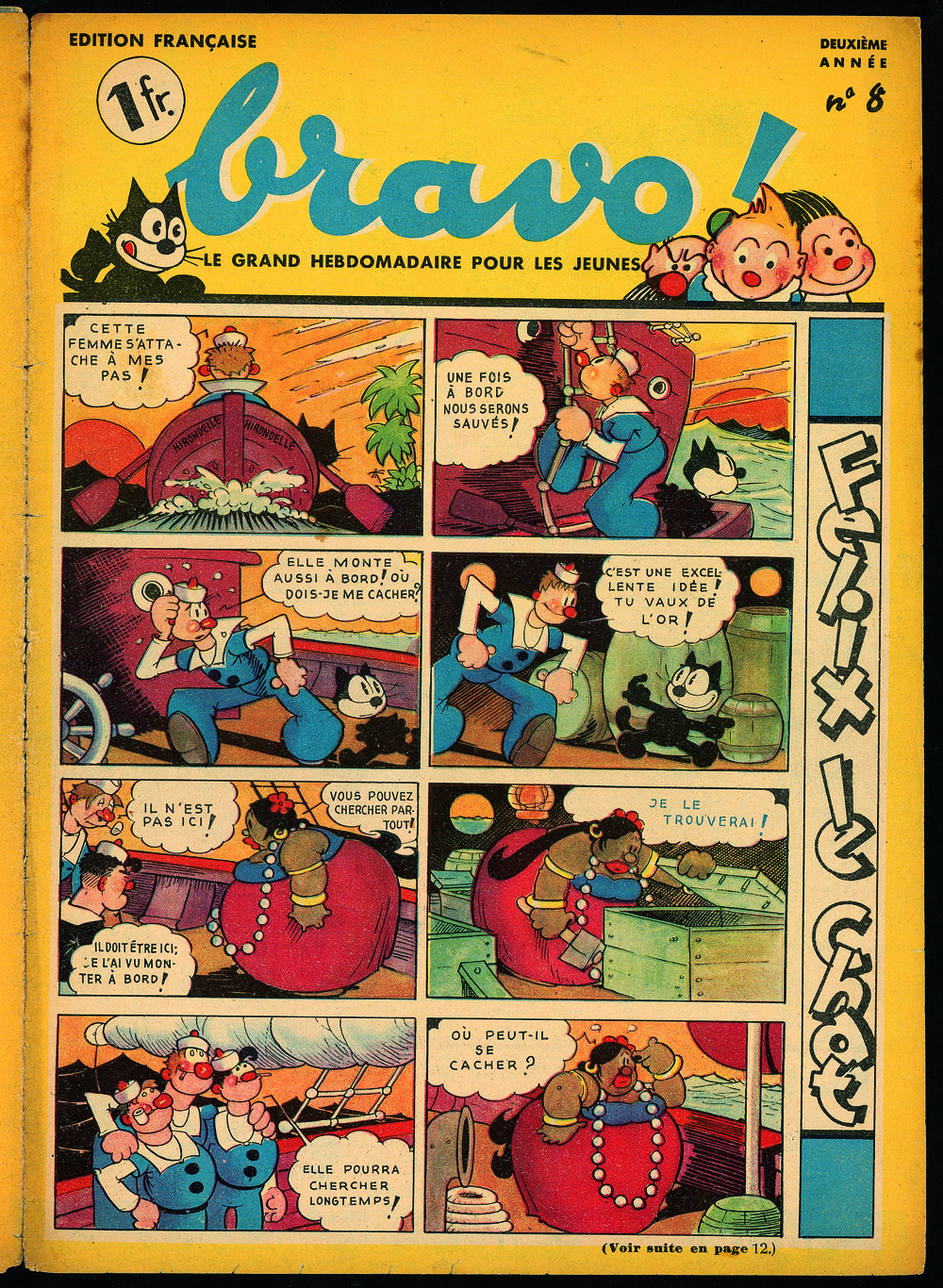 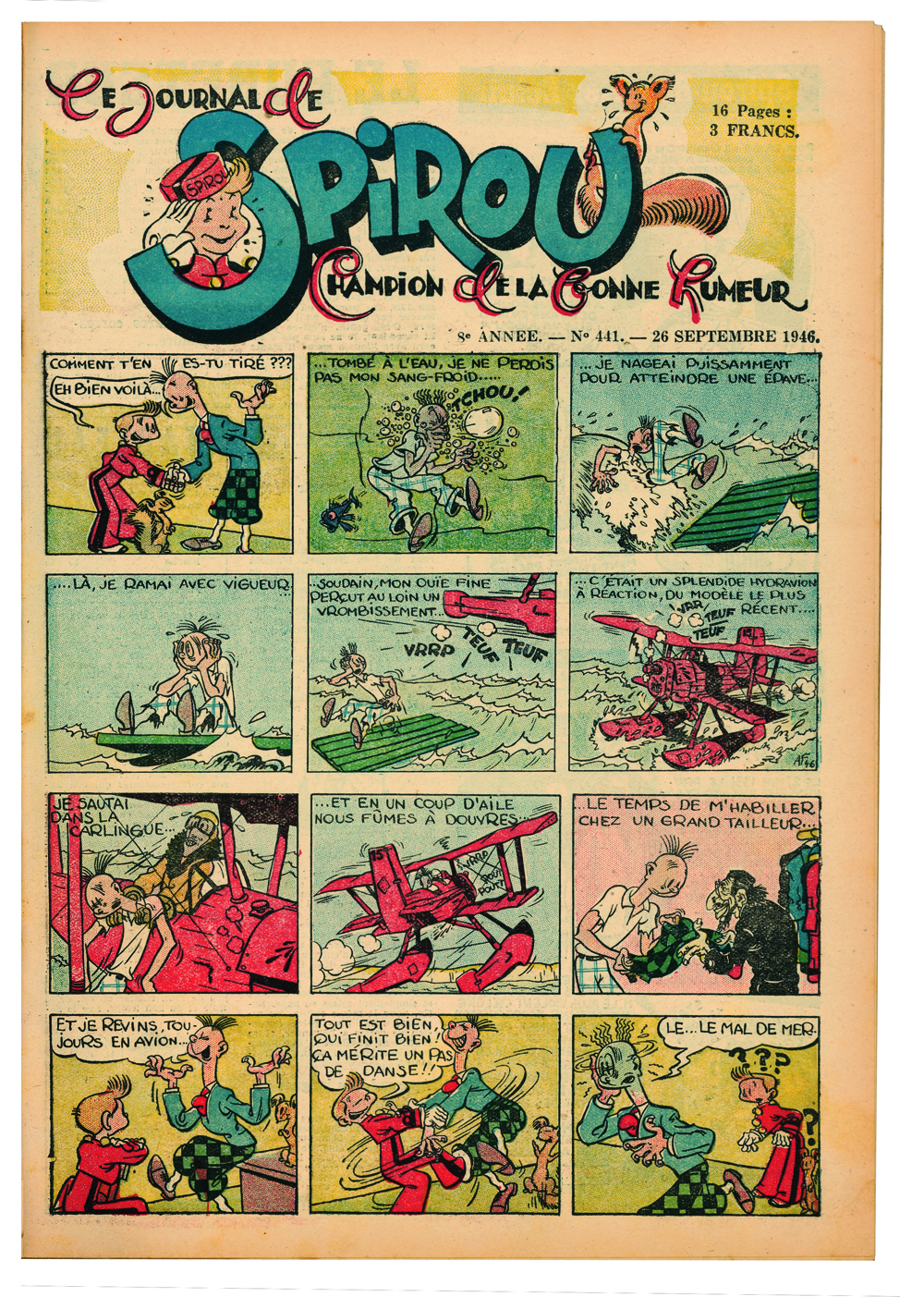 The beginning of the end?

Comic strip periodicals quickly became a medium of pre-publication. For authors and illustrators working in the field the magazines were an essential aspect of their careers: they benefited by introducing their work to the wider public before it became published in book format.
The system worked to give authors and new talent a way to test their stories and creations with readers. This efficient and profitable strategy worked without any problems for more than 20 years (between 1950 and 1970) before slowly fading as magazines like Tintin, Pilote and Métal Hurlant published their final issues. And yet it still continues in some corners, with for example Spirou magazine still being published today. Paradoxically it was the growing publication of albums that ended up contributing to the disappearance of periodicals.
The readership also underwent change; today there are fan communities, members of which know their favourite heroes and stories inside out.
The dwindle of demand for paper publications was already observable before the arrival of the Internet and digital formats. The omnipresence of television as well as the appearance of video games were behind the drop in weekly magazines. The business model behind the magazines (editorial team, subscription, etc.) would also lose its position as the only way to achieve success. A page was turning; it was the beginning of the demise of paper publications, a demise that is now in full swing several decades later!

All is not lost

In Japan, the prepublication in magazines of stories that later come out as albums is still popular today; mangashi (manga magazines) are diverse and numerous, and you can find them left behind on park benches and in the underground. It goes to show that there is still some mileage in the concept and in fact it is even enjoying a bit of a renaissance in Europe as certain publishers publish strips from upcoming albums in newspapers.
And yet, digital content and fanzines are opening opportunities for testing new work with young readers. Digital strategies also help to curb the huge waste that happens in the paper publication industry, with over-production and the huge destruction of printed matter.
It may sound like an unbelievable statistic, but every year millions of books and albums are destroyed – the estimate is around 20% of production! Those who love reading would never think of destroying a book and yet that is the dark side of the publishing business.
Making a move to digital prepublication strategies is one way to reduce the effects of this worrying activity. If publishers had a Spotify-like (Spotify is a streaming music service) platform for publishing, on which they could test the popularity of comic strips before being able to calculate production rates more accurately, this could make the industry much more efficient.
Which would also help to support sustainable development...

Some of the most striking front covers 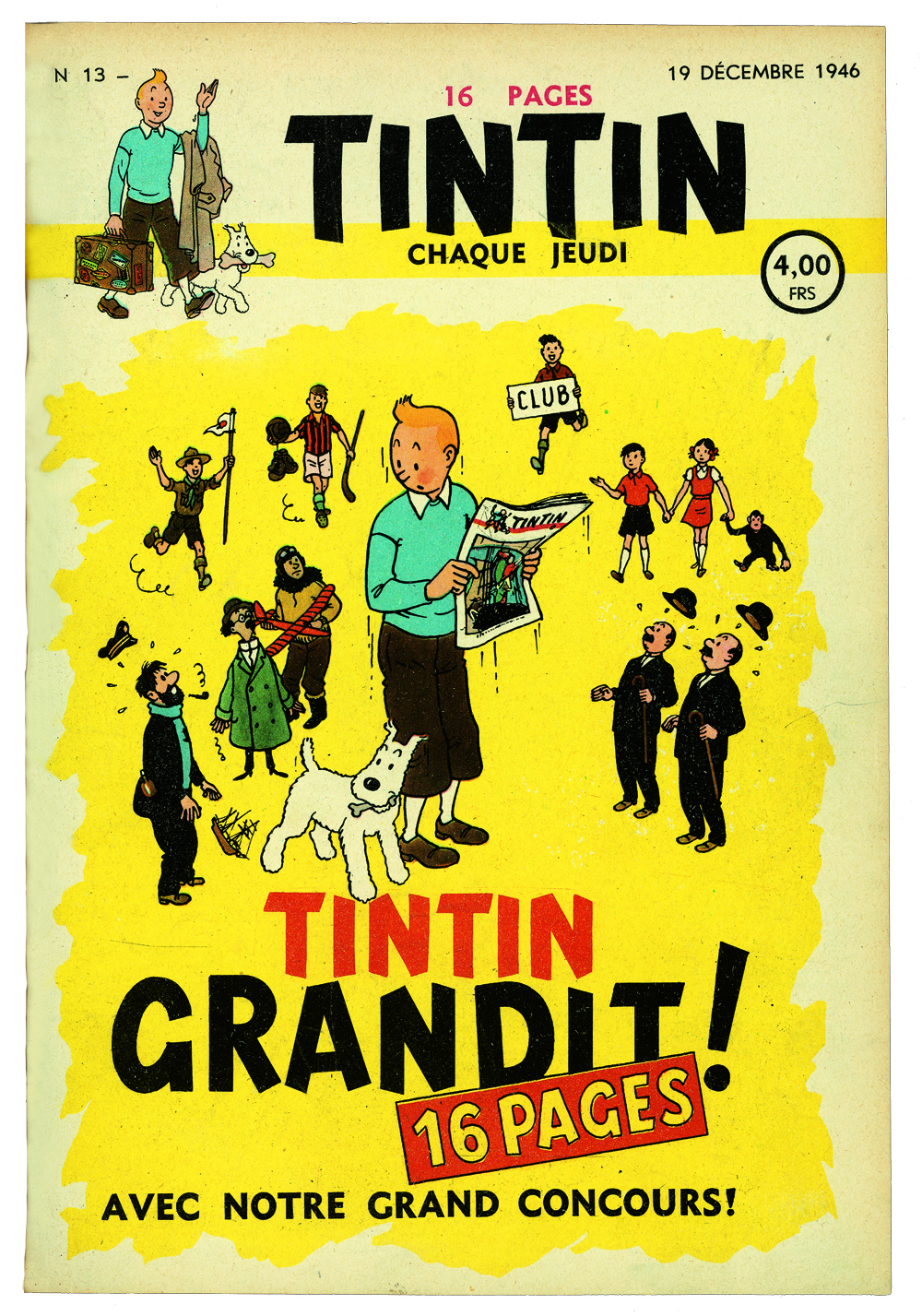 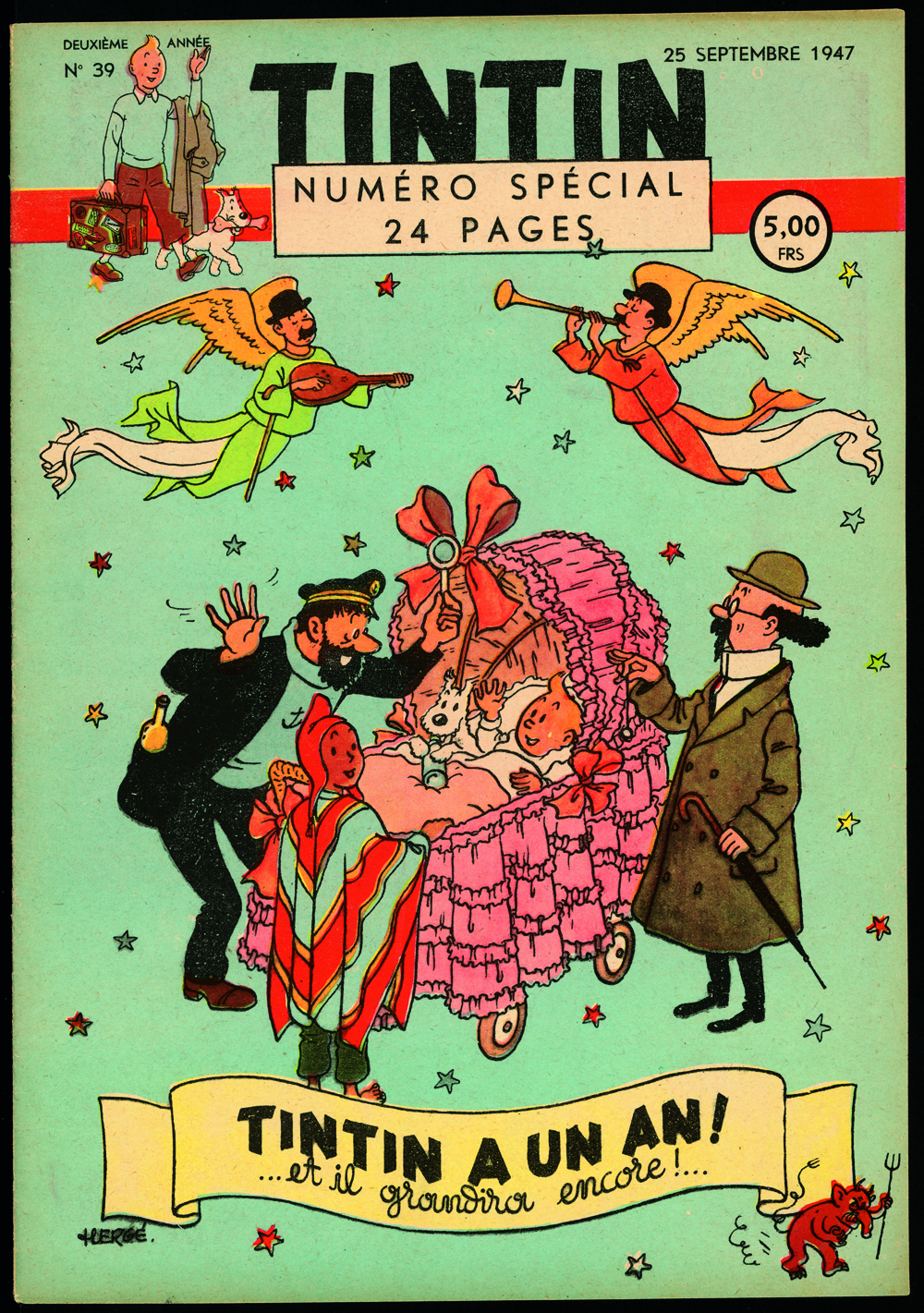 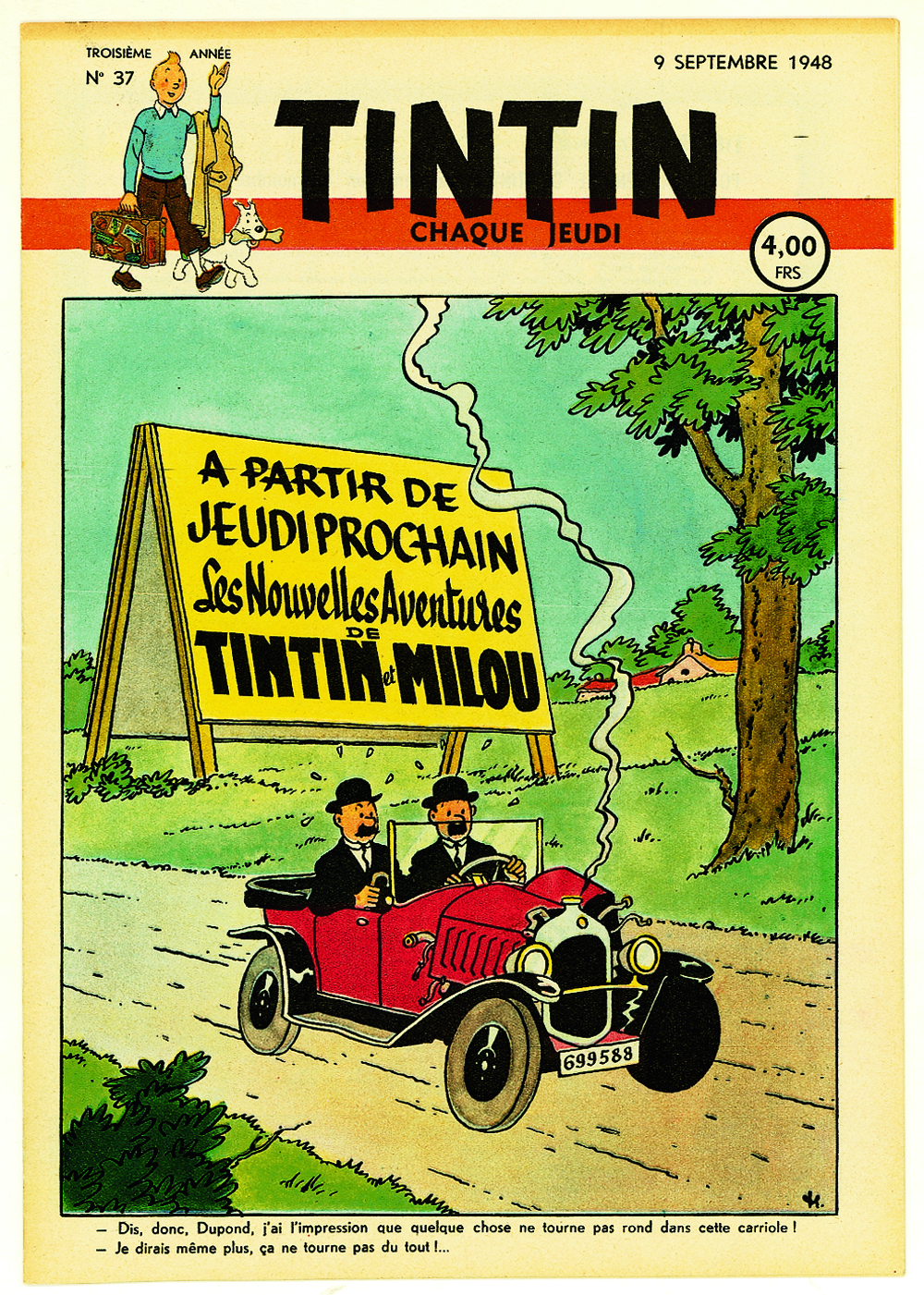 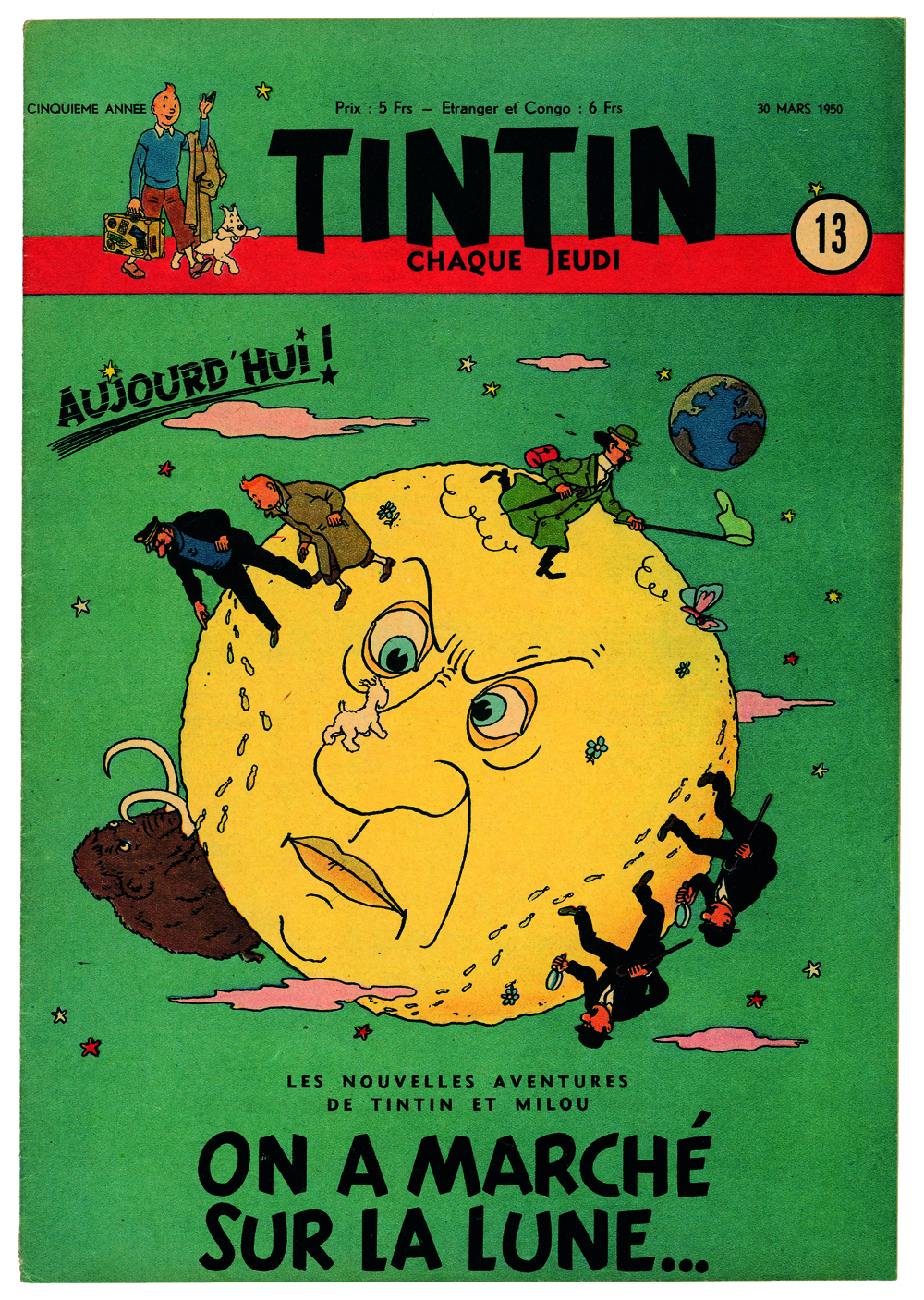 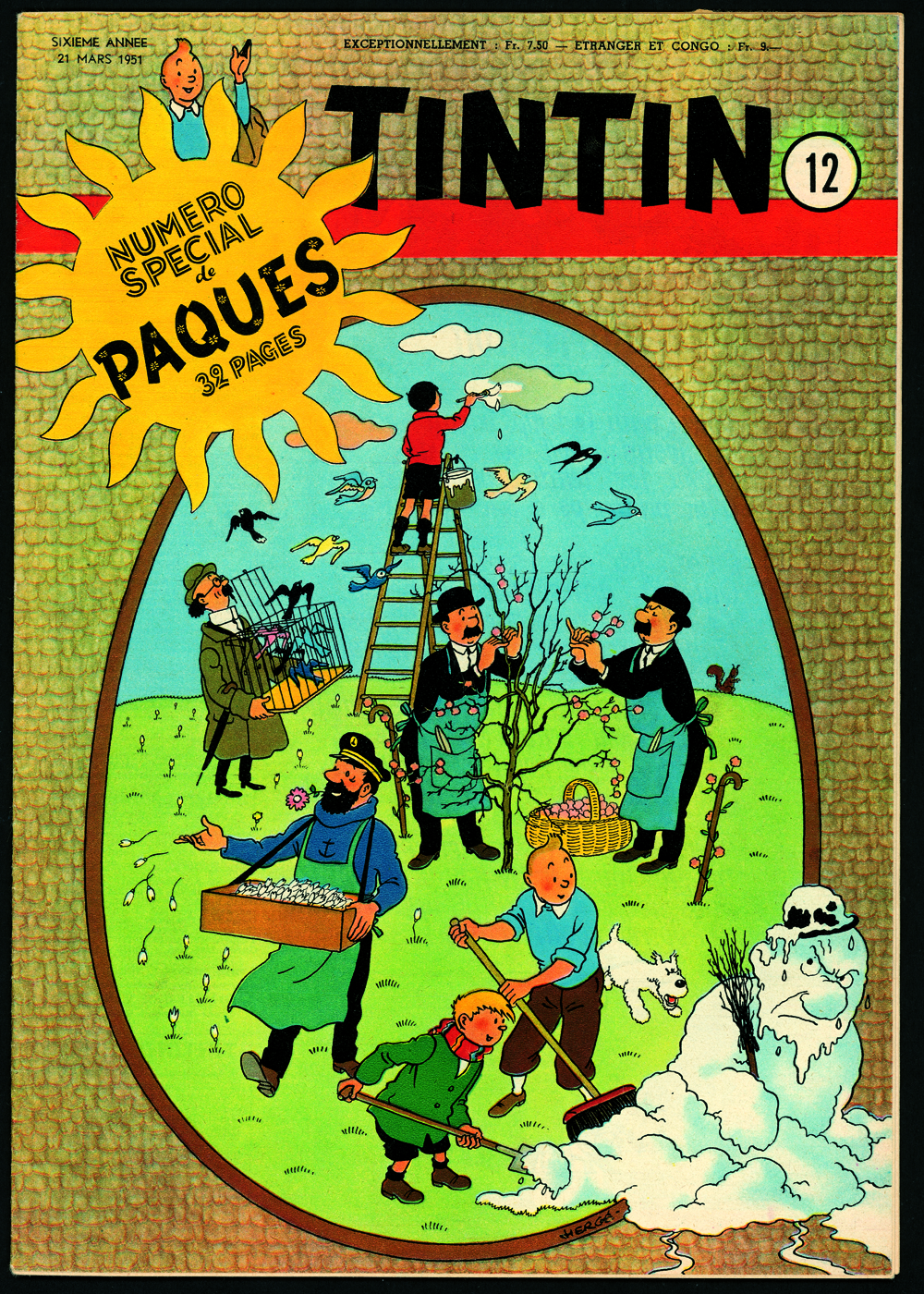 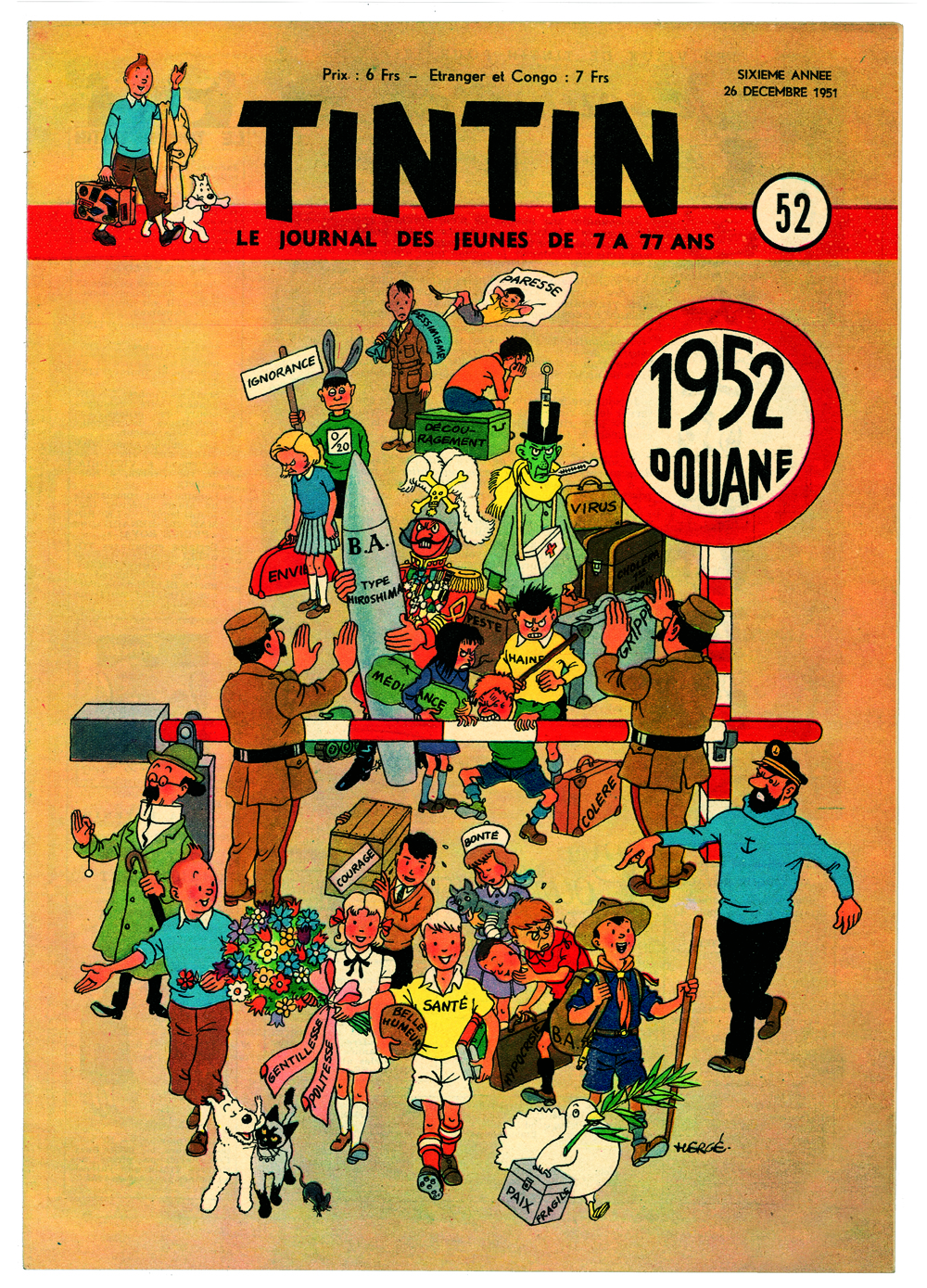 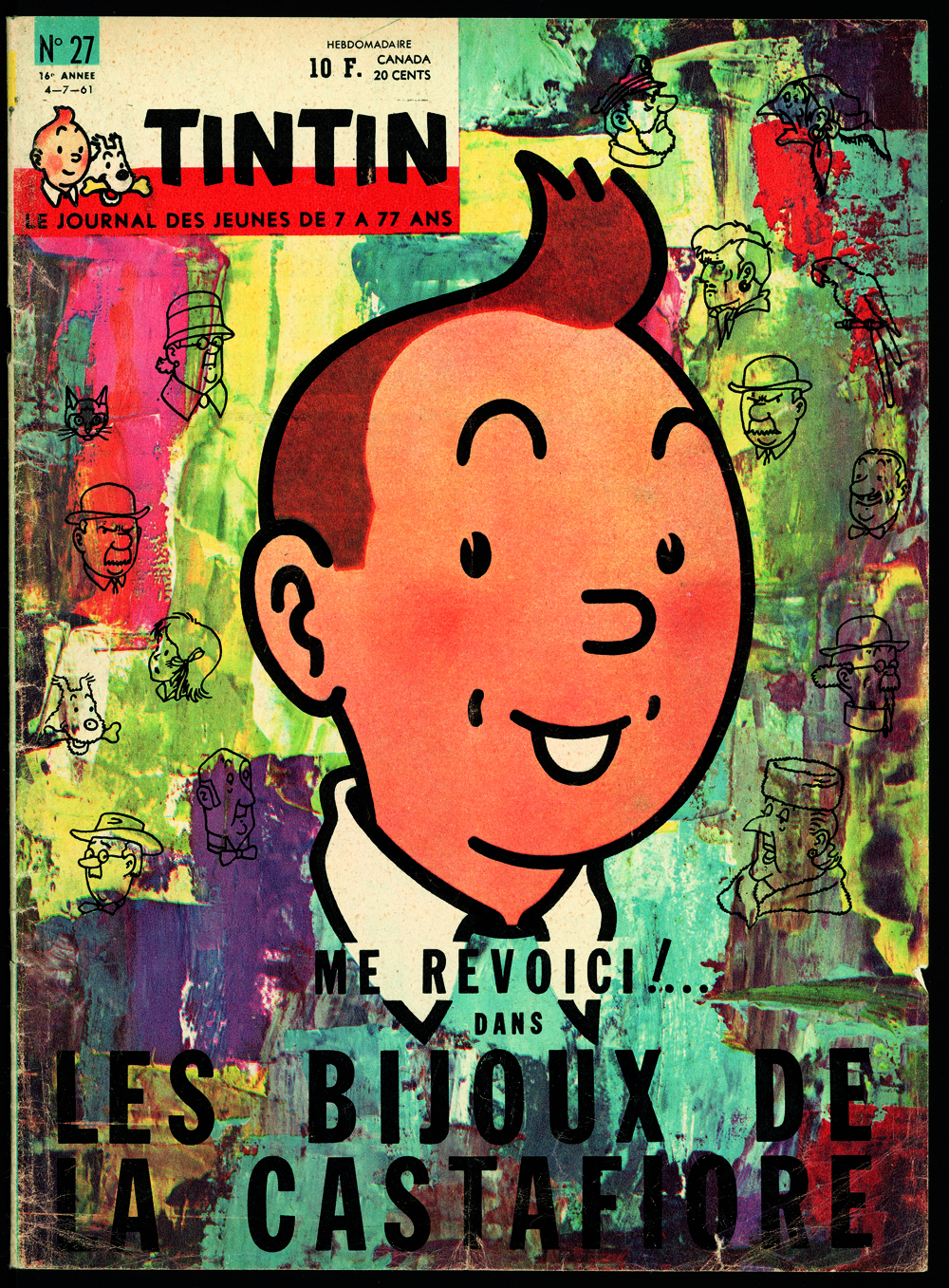 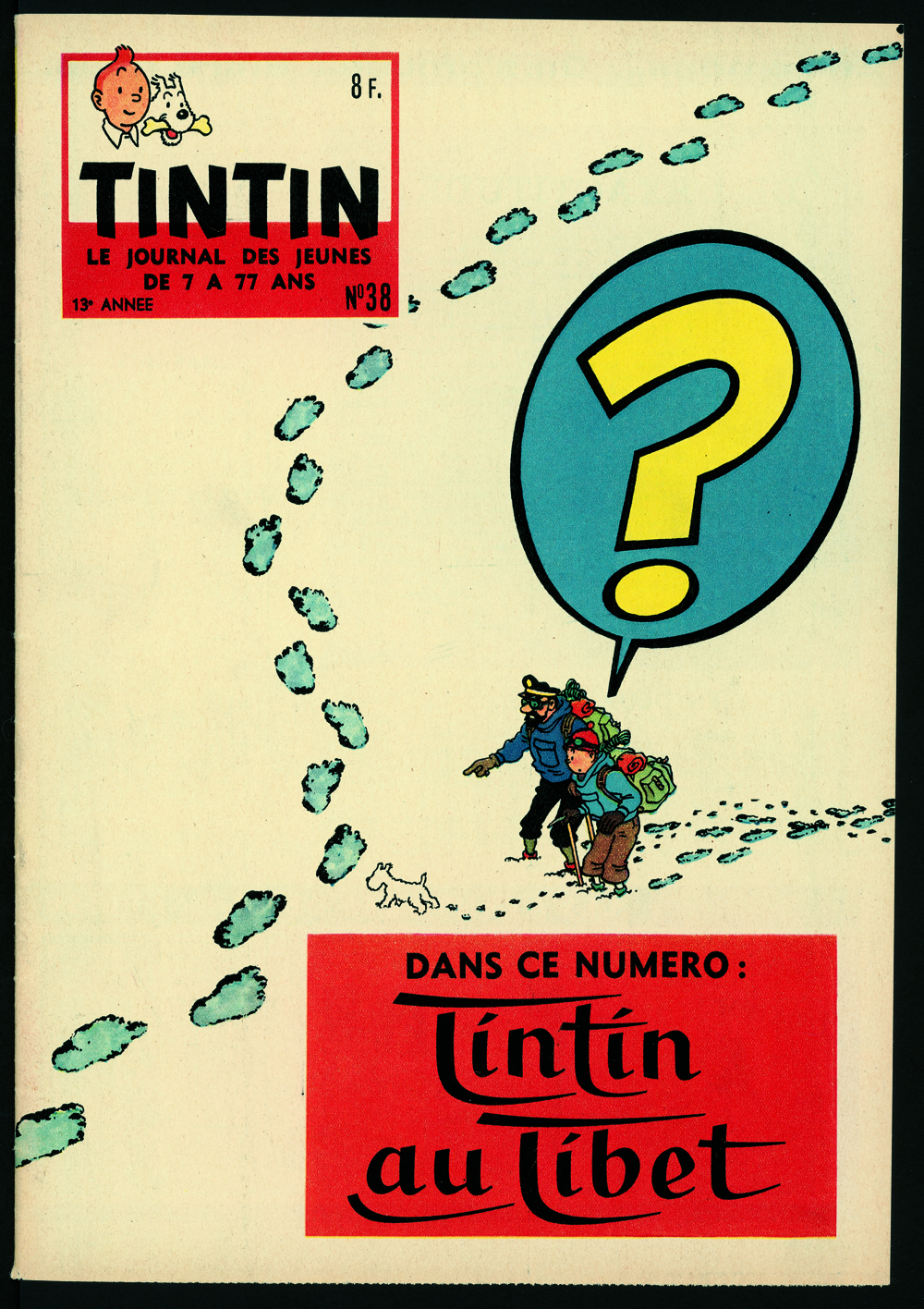