Tintin in the land of the Vikings...!

News
Published on 21/03/2018
Tintin at the figurehead of a longship in the land of the Vikings... it is almost a stereotype. And yet Hergé drew it in 1982! Now we have a new exhibition dedicated to our hero and his creator, in Odense, the third city of Denmark.
To understand this "big gap" between the core of the work and its derivatives, it is essential to understand the importance of merchandising Tintin. Initiated by its creator and developed uninterrupted following the growing success of the Adventures of Tintin.
This "obligatory passage" allowed the readers of the albums "above all to participate mentally in the creation of a world (in this case that of Hergé) from physically present elements". (From the character to the figurine: the products derived from Star Wars as expansion of a universe by Alain Boillat).
We could almost speak of reification of an imaginary Hergéan world, even of a "cult" and adoration of the star character(s), by their presence in the terrestrial world and in all kinds of forms... even the most extravagant or unexpected!
This scholarly digression about the Tintinesque incarnation having been exposed..., let's go back to the country that welcomes the creator of the character with the most famous quiffe in the world!

Hergé in Odense is the third presentation of an international tour, that is intended to tour for as long as possible... For practical information about this event, we refer you to our news and the press release available in English.
Odense is the hometown of the famous writer Hans Christian Andersen, the storyteller of a hundred and fifty-six stories including the most autobiographical: The Ugly Duckling...
This exhibition in Denmark is also an opportunity to bring to mind this other Danish hero with a tintinesque look, Palle Huld, who died in 2010. 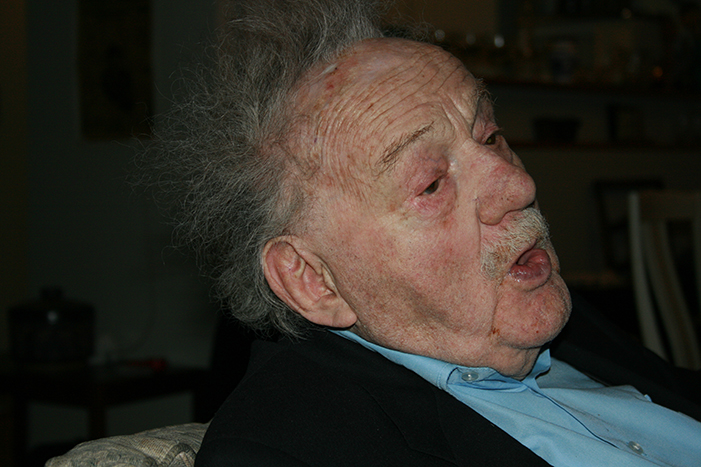 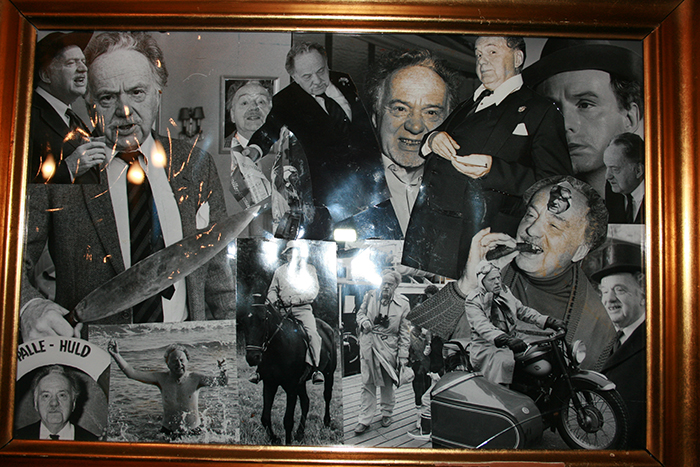 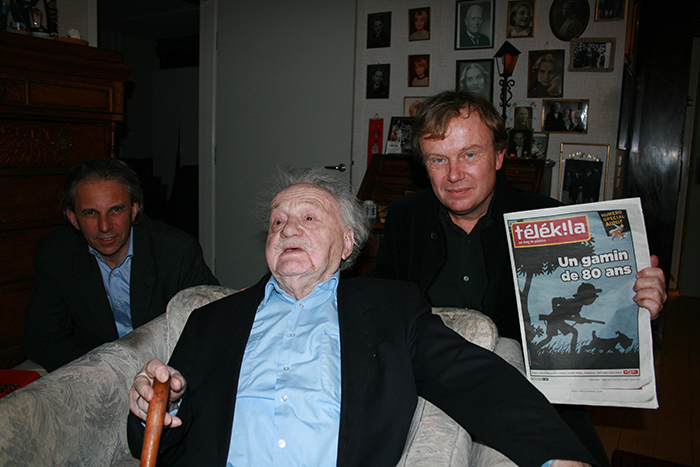 A member just like Hergé in his youth of the Scout mouvement, he made the front page of the international press in 1928. After winning a trip around the world organised by the Danish newspaper Politiken, he was the subject of numerous reports and interviews globally.
Before his death we had met with him at home to try to find out if, by any chance, if he and Hergé had met, or if he had known of any connection between his adventure and that of Tintin.
To find out more, read the Tintin Magazine that we published at the time.

The links that unite Hergé (and his character) to the kingdom of the Little Mermaid are numerous.

Connections:
1946: Per Carlsen and Hergé make contact (for more information about Carlsen Publishing)
1948/49: First Danish Adventures of Tintin published in the Kong Kylie fanzine.
1953: Publication of Anne Marie Nørvig's essay on Tintin in Politiken newspaper.
1956: Hergé visits Hornbækhus and the Elsinore Technical Museum.
1957: Continued pursuit of the publication of the Adventures of Tintin in the newspaper Politiken between 1957-1976.
1957: Hergé on vacation aboard the Danish ship "M / S Samos" in the Mediterranean Sea.
1960: Per Carlsen Publishing House publishes The Adventures of Tintin in Danish, German (1967) and Swedish (1968).
1960: The first Danish press review of Tintin.
1962: Theatrical release of Tintin and the Mystery of The Golden Fleece which was also the first action film dubbed in Danish.
1965: Hergé eats... mussels with famous Swedish comic artist Jan Lööf and publisher Per Carlsen in Copenhagen.
1971: Per Carlsen points out to Hergé that there are penguins in Greenland and encourages him to adapt accordingly some frames of the album Destination New York which is the second of the series of adventures of Jo, Zette and Jocko and the rest of Mr. Pump's Testament.
1971: The first official visit of Hergé to Denmark - presentation of the model of the Danish Licorne Enhjørningen. 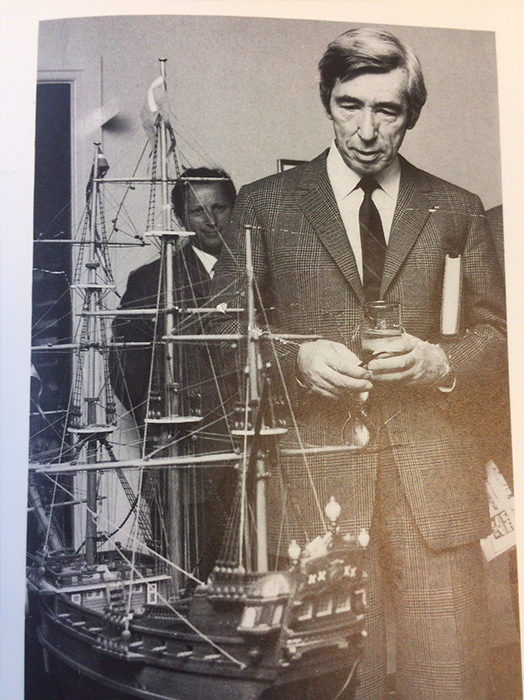 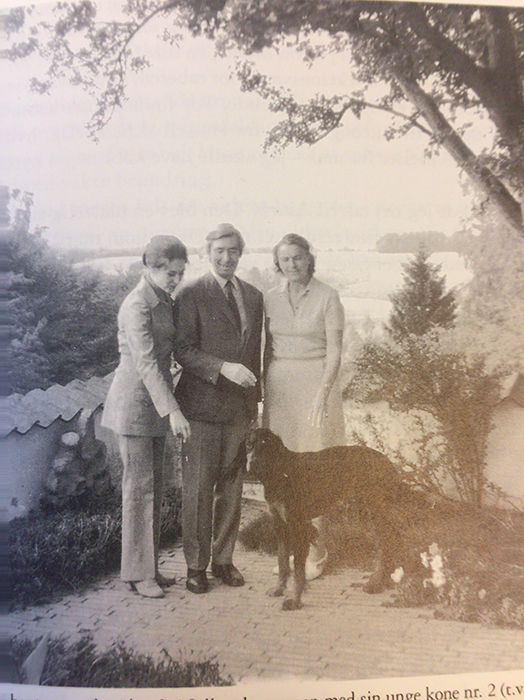 1971: Hergé authorizes the Danish rock band Gasolin to use a vignette from the album The 7 Crystal Balls for a record sleeve.
1972: The Adventures of Tintin on the Danish airwaves in the form of radio serials, also produced on vinyl and audio cassettes.
1975: Per Carlsen manages to convince Hergé to edit a page of the album Tintin in the Congo.
1976: Hergé makes an illustration of Tintin with a Danish flag for the cover of the national weekly Billed-Bladet.
1976: Crown Prince Frederik and Prince Joachim officially become Tintin fans (presented by their father and the Danish prince Prince Henrik consort, born Henri de Laborde of Monpezat).
1976: Hergé offers Crown Prince Frederik and his brother, Prince Joachim, autographed Tintin albums and, to do so, receives a delegation from the Danish Embassy in Belgium. (42 years later, Frederik closes the loop by inaugurating the Hergé exhibition at the Brandts Museum!).
1976: Anecdote relayed in the Belgian press about Danish journalists who accompany the Danish state visit and who strangely resemble the Dupondt!
1982: Drawing of Hergé to celebrate the 70th birthday of Per Carlsen.
1983: The first Tintin exhibition in Denmark (The Imaginary Museum of Tintin) at the Aarhus AROS Art Museum and the National Museum in Copenhagen.
1983: The first book in Danish dedicated to Hergé and Tintin (Tintin and the World of Hergé), by the publisher Carlsen Jens Peder Agger, in collaboration with Hergé and Benoît Peeters.
1987: Tintin published in Faroese for the first time (language belonging to the subgroup of Scandinavian languages).
1988: The last original drawing of Tintin (directed by Bob De Moor) for the double album Destination Moon and Explorers on the Moon published by Carlsen.
1997-2002: Tintin in the Danish High Court (the Danish translator brought a lawsuit against Carlsen because he thought he contributed to Tintin's success in Denmark).
2003: Coproduction Moulinsart / Angel Production (a Danish production company) of the film Tintin et Moi directed by Anders Østergaard.
2005: Publication of a new Danish translation of the Adventures of Tintin and publication of new editions (facsimiles in color, mini-editions, new editions of pocket, facsimiles in black and white).
2008: After being published by Carlsen for 48 years, the Cobolt Publisher takes over and becomes the new Danish publisher of Tintin's Adventures in accordance with EU rules applicable in the competition or antitrust fields.
2009 (Tintin turns 80): Meeting between representatives of Moulinsart and Palle Huld in Copenhagen.
2014: Tintin & ToRS: annual report published by the Department of Intercultural and Regional Studies of the University of Copenhagen, devoted to Tintin and the results of the various thematic conferences organized around Tintin.
2017: Visit of Royal couple Philippe and Mathilde to Denmark and welcome address by Queen Margrethe reflects on Hergé and Tintin.
2018: Hergé in Odense. According to the Danish saying, There are dreams that are not told. So we invite all our friends from Scandinavia to come and discover for themselves this journey in the wonderful universe of an exceptional artist: Hergé!!!