Tintin, the Moon, a genial intuition

Tintin, was the first of thirteen who walked on this surface.

Hergé, visionary. Tintin, voluntary and reckless.
A vision that takes an artistic form is always a creation, but a creation of the mind is not always…visionary.
Hergé never shouted from the rooftops that he had a vision...imagining Tintin's lunar adventures. An intuition certainly, a lot of work certainly, but above all, the will to make readers live a dream, in the company of his star character.
The two Moon books, more than any other books in the series, lead the reader to imagine, to make their imagination work and plunges them into an unknown universe. They are in the front row to observe this magic trick that takes them far into the future, into another world of possibility. In short, Hergé's visionary spirit has helped propel millions of Tintin enthusiasts to the Moon. 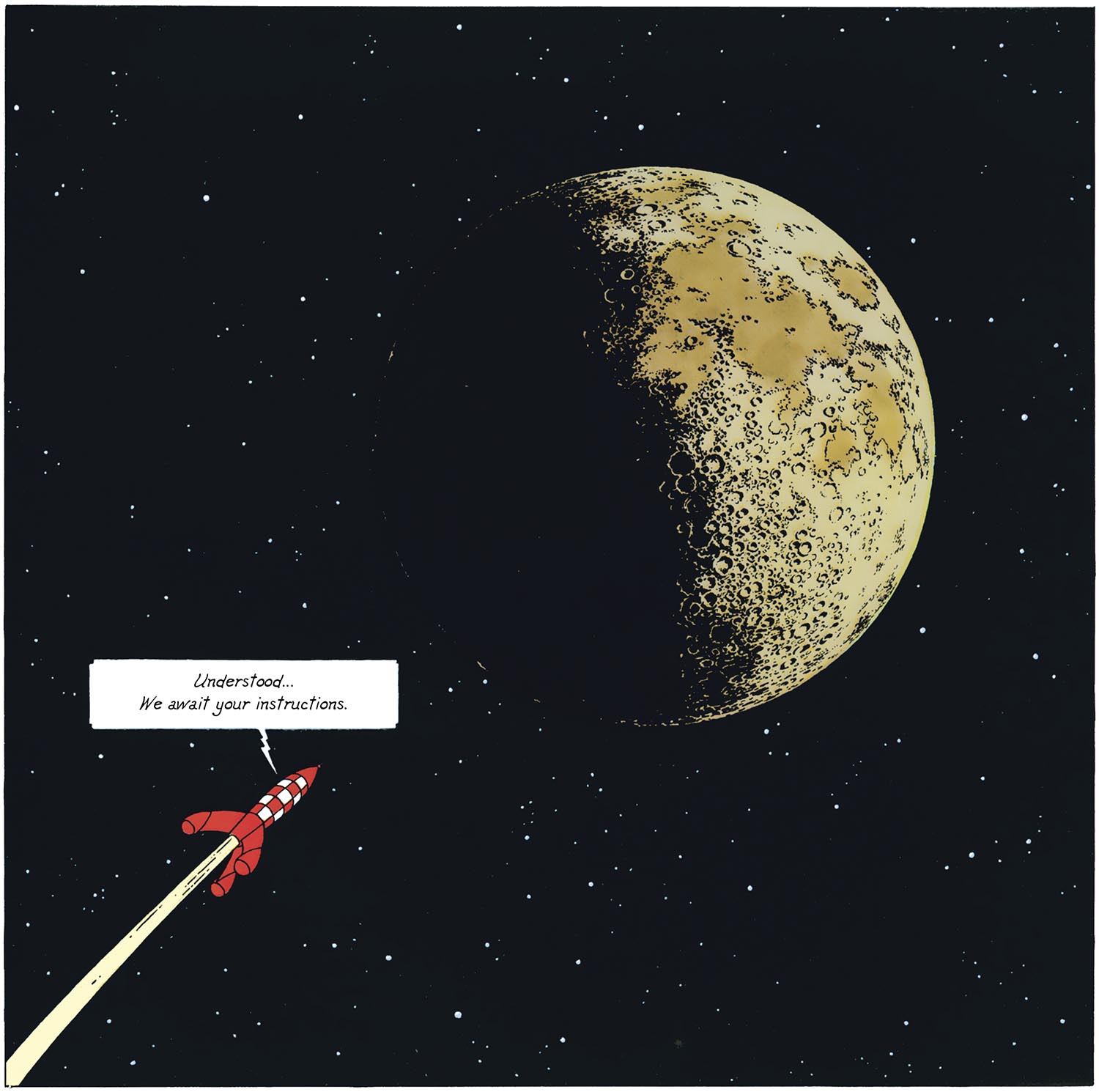 © Hergé-Moulinsart 2019
To assume the role of astronaut, or, depending on the part of the world, cosmonaut, requires a great deal of courage from Tintin and his companions at a time when no one had ventured on such an adventure before.
Three years between the idea and the publication in Tintin magazine
The idea of a new adventure for Tintin, which had been in Hergé's mind for almost three years, materialized in the Belgian Tintin magazine on 30 March 1950. 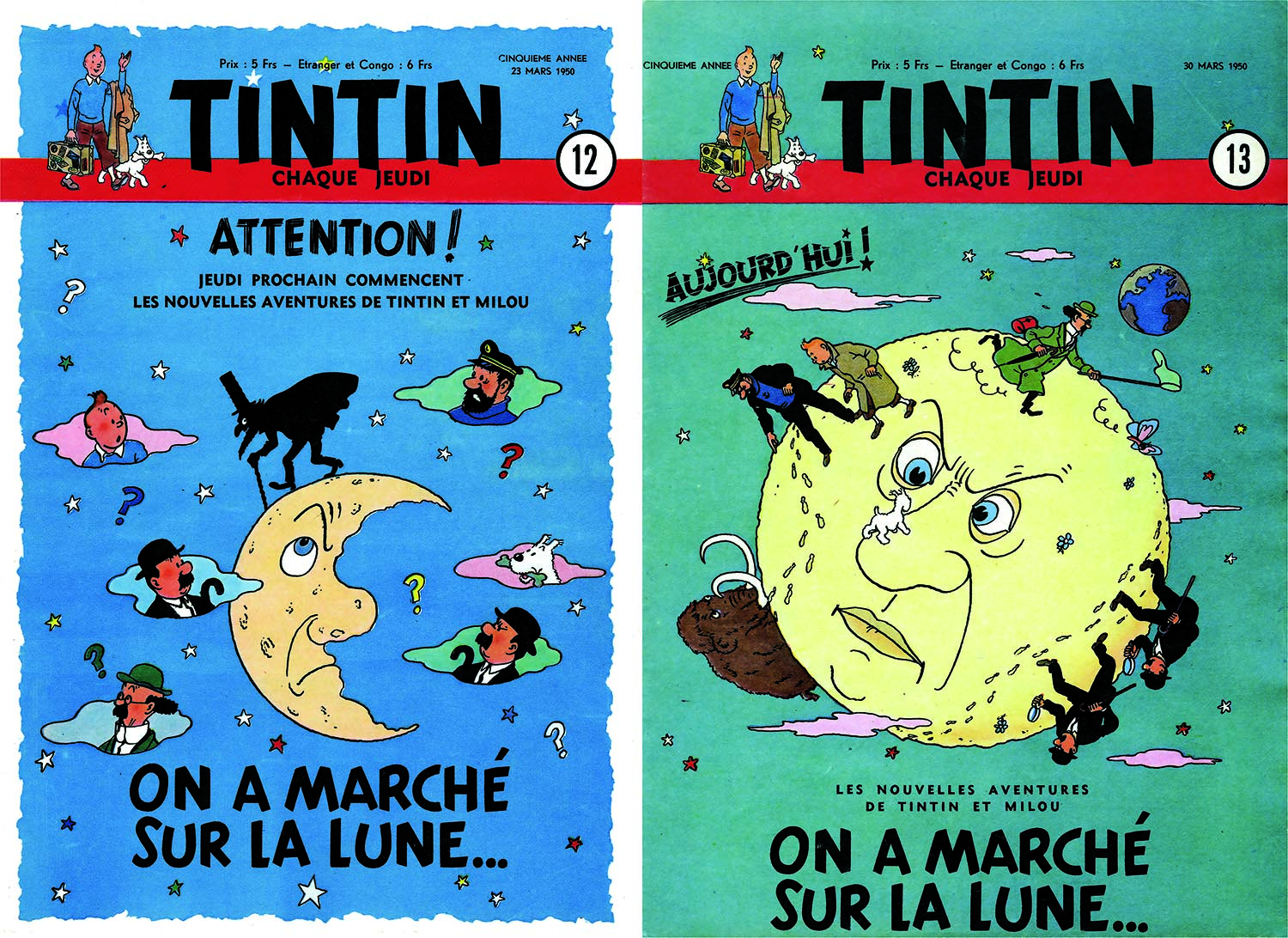 © Hergé-Moulinsart 2019
It is entitled: On a marché sur la Lune. Tintin and Haddock went to Syldavia to join their friend Professor Calculus, far from imagining that a place much further from Marlinspike Hall would await them later.
In this story, which blends science and suspense in an admirable way, punctuated subtly by typically Hergéan gags, the illustrator once again manages to educate and entertain everyone aged 7 to 77 years old who were loyal to Tintin magazine. 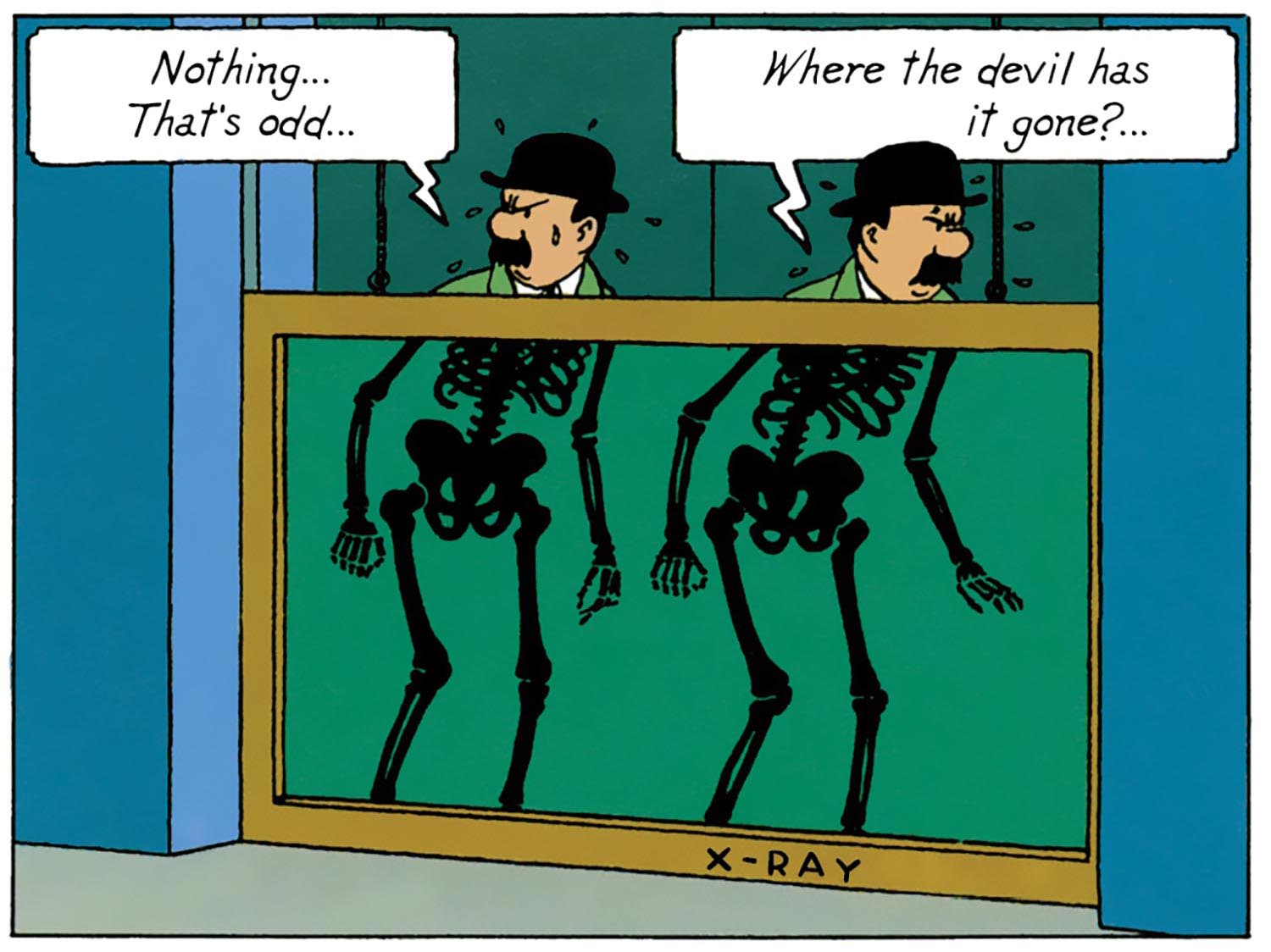 © Hergé-Moulinsart 2019
From this prepublication in the famous magazine, two colour editions of French books were later published. The first, Objectif Lune, in 1953, followed by the sequel, On a marché sur la Lune in 1954. The English versions, Destination Moon, and Explorers on the Moon. Both were published in English in 1959.
Predict the future? Without a doubt, but...
… for Hergé, what counted more than anything else was the desire to anticipate the rapid changes in his environment by mastering, if possible, the notions of technologies related to the subject. To achieve this, the cartoonist carried out as much research as possible suplemented by a large amount of documentation. 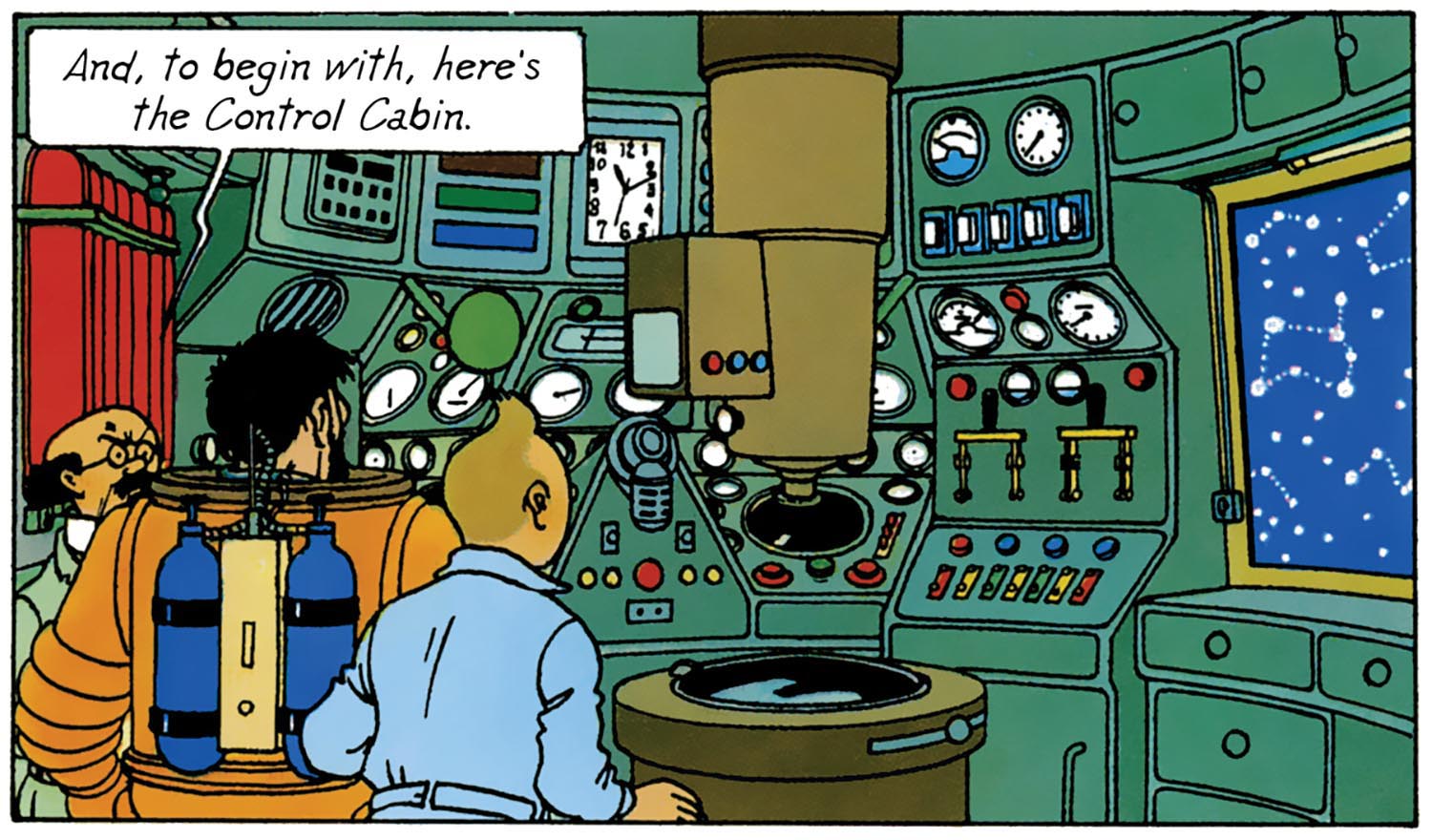 © Hergé-Moulinsart 2019
There are no superstitions or crystal balls here, but, on the contrary, a creative work based on the art of knowledge and on the foundations of derivation, inductive method versus intuitive method. The resulting hypothesis is that going to the Moon was a realistic proposition for Hergé. Above all, it provided him with a first-rate novelistic and exhilarating subject. The reader could only subscribe to this quest for the Moon, "the absolute object of conquest".
The Moon... reduced to an "object of conquest" and fantasy? Yes, but the objective elevated to the rank of a fiction engine, always goes further and makes the reader want to surpass themselves.
Only vision is insufficient!…
It must be accompanied by a good dose of perseverance, determination and hard work. 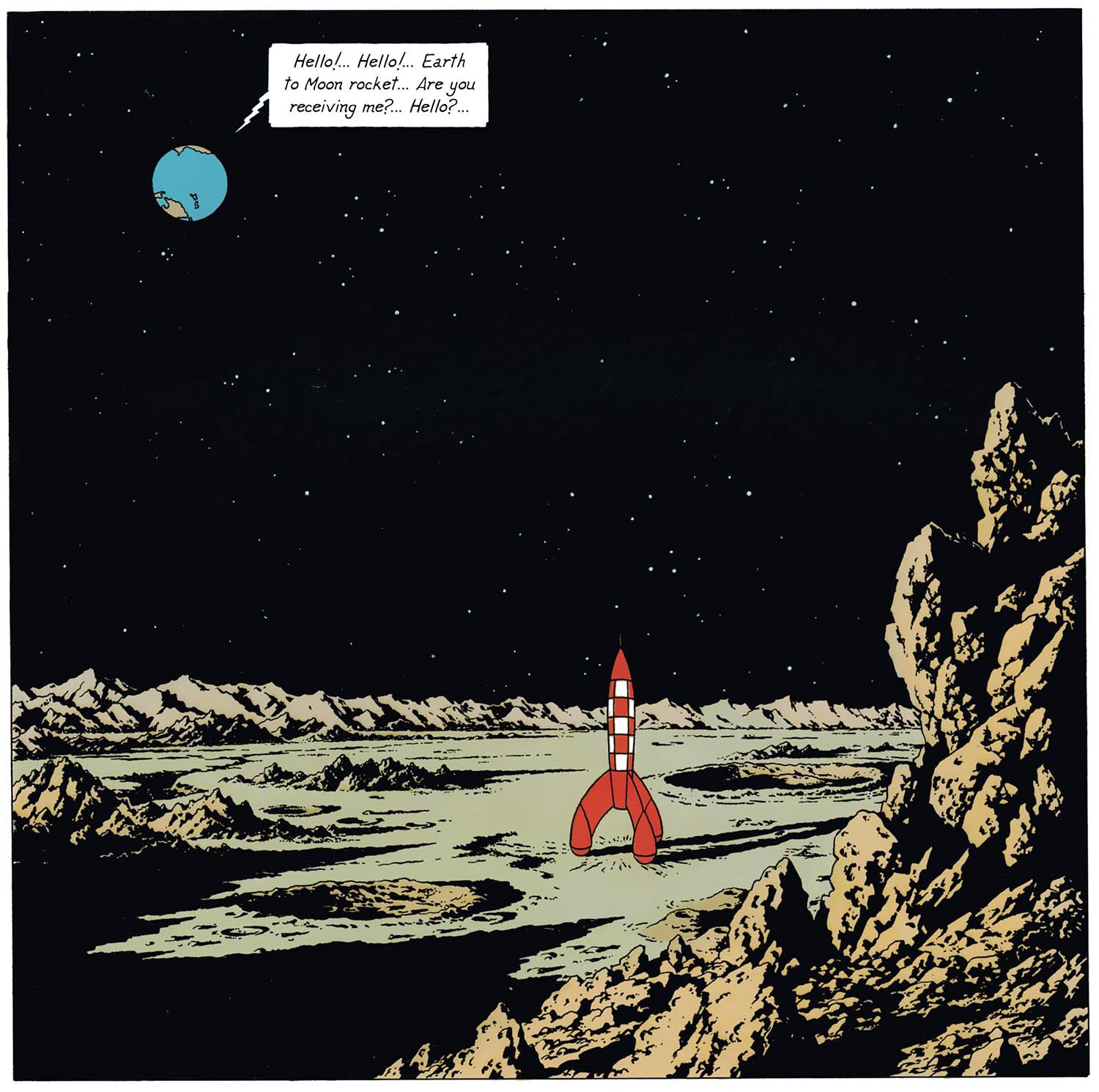 © Hergé-Moulinsart 2019
The lunar construction site was so ambitious that the creation of Studios Hergé (1950) was the first step towards a rational distribution of tasks. One does not embark on such an adventure without making certain organisational arrangements. No room for improvisation. A good visionary plans his project in such a way as to put the idea on the right path, in order to achieve the goal. In this case, walking on the Moon for the first time. From the "vision" to the fruition, took three years.
For Hergé, this quest for the impossible or the possible vision of what can happen, is at the heart of artistic creation and exploration.
At the same time, a strange thing happened. Tintin's creator slowly entered a phase of doubt and crisis. A certain uneasiness seized him, then he fought it, by making his hero travel in the depths of outer space. An approach that betrays this need to conduct a quest for oneself, without forgetting the pleasure of the readers. As proof, this discovery by the lunar rocket window of a view from above the earth, a crucial affirmation of existence, the touchstone on which artistic expression is based. 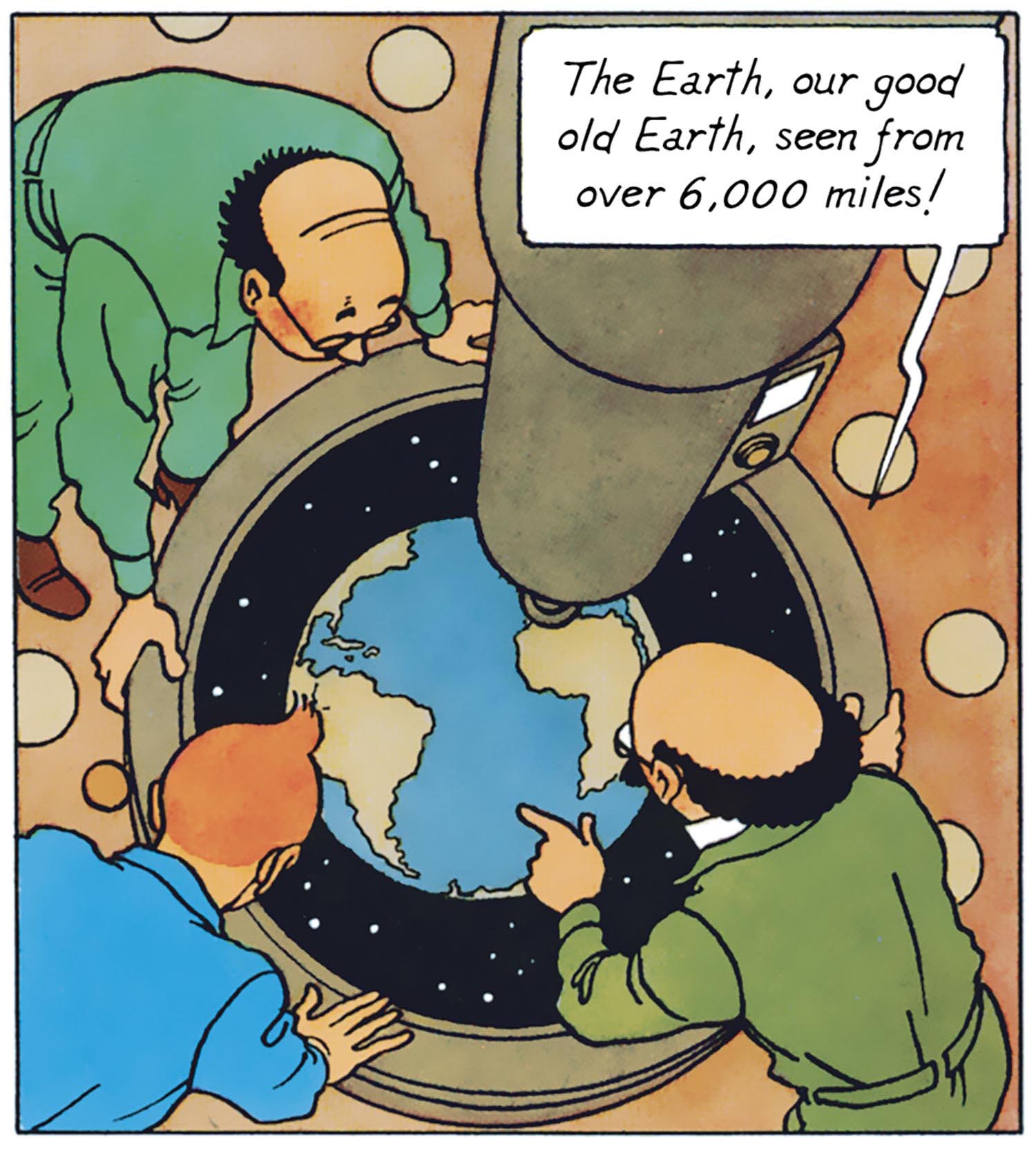 © Hergé-Moulinsart 2019
Quiet, we're floating...
Hergé, or the experimental genius that transcends the boundaries of the known, by using all cinematographic techniques such as cutting, shots of all kinds, cliffhangers, ellipses, subjective cameras,and so on, transports the reader on an almost sensory journey, without limits, a journey made possible by a simple pencil stroke. Genius!
Ah! That famous moment when the darkness of the cosmos prevails over Earth's day, with Haddock and Tintin’s manoeuvres floating in weightlessness, at the end of a sinuous cord. A sequence that breaks with the gravitation... of reading. 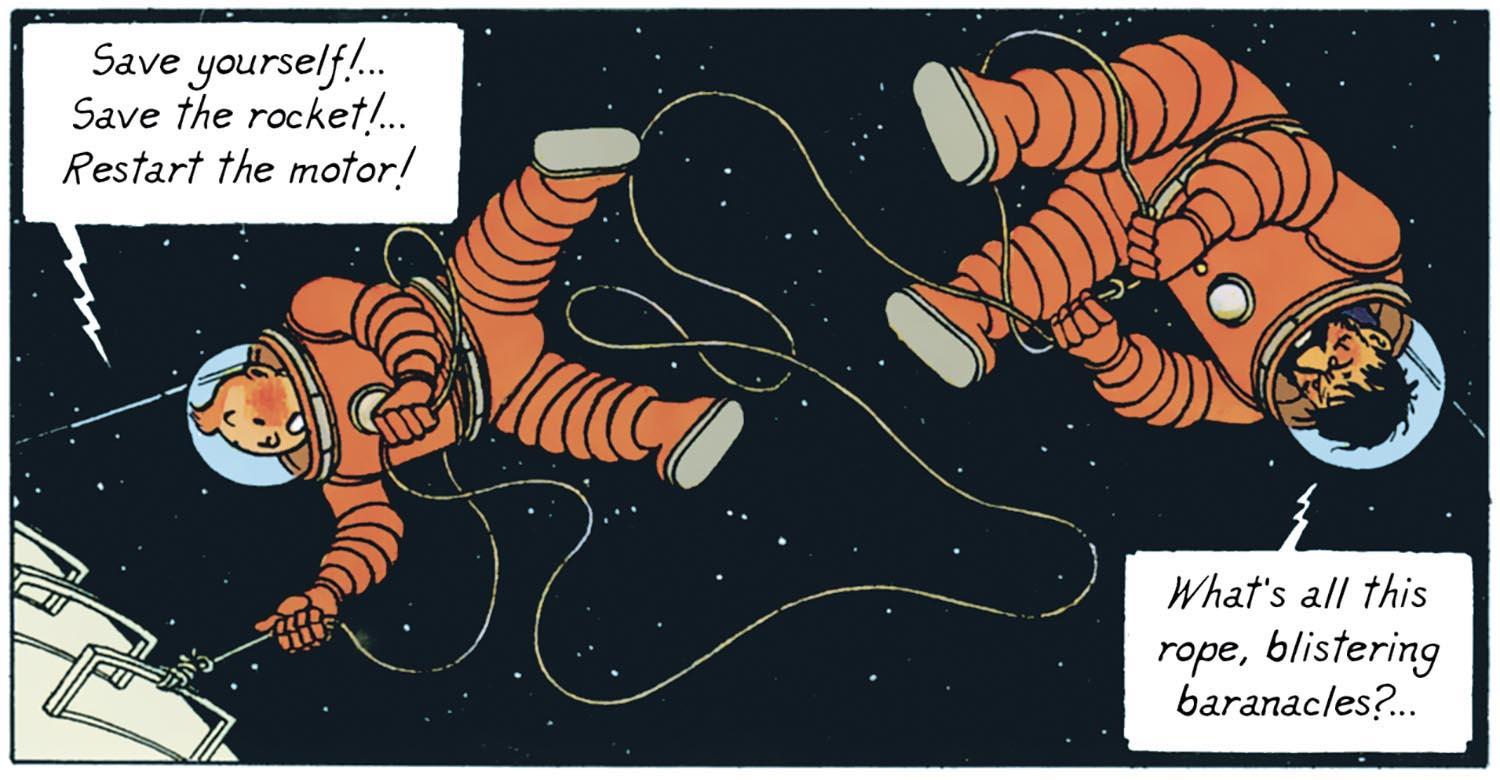