The Tintin and Hergé exhibition is at its height 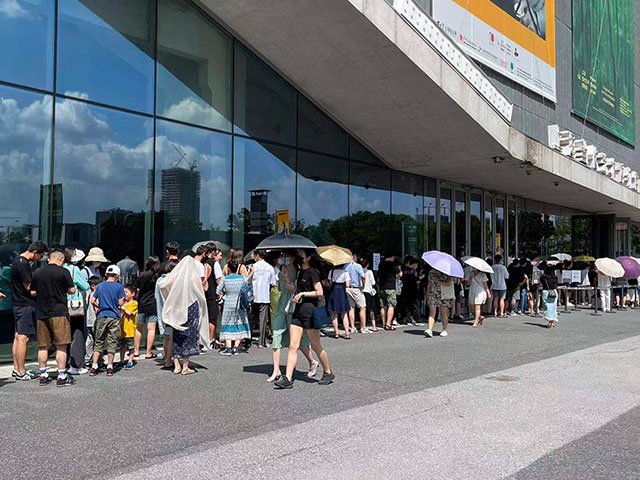 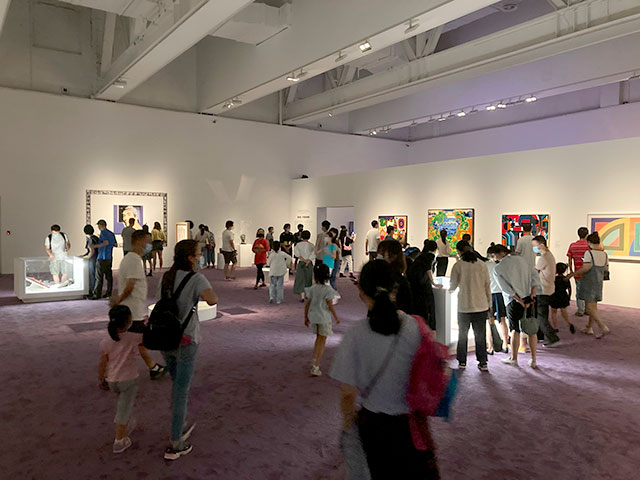 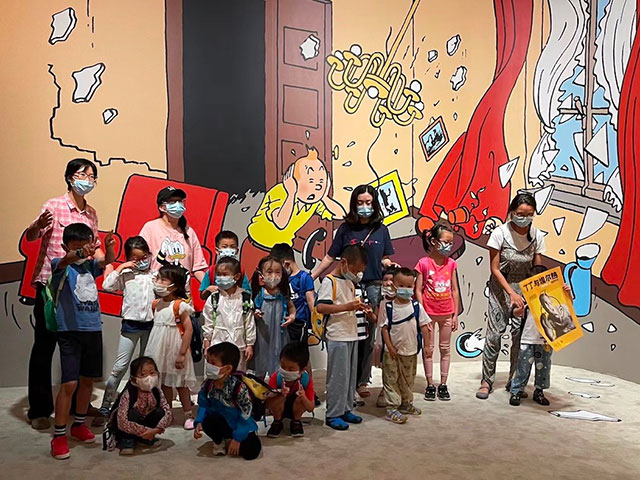 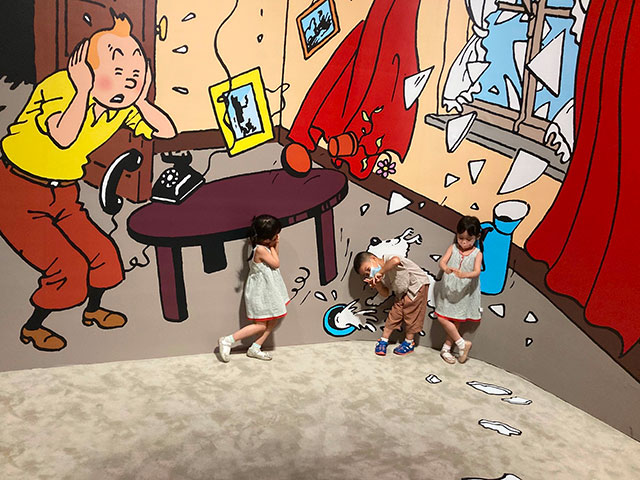 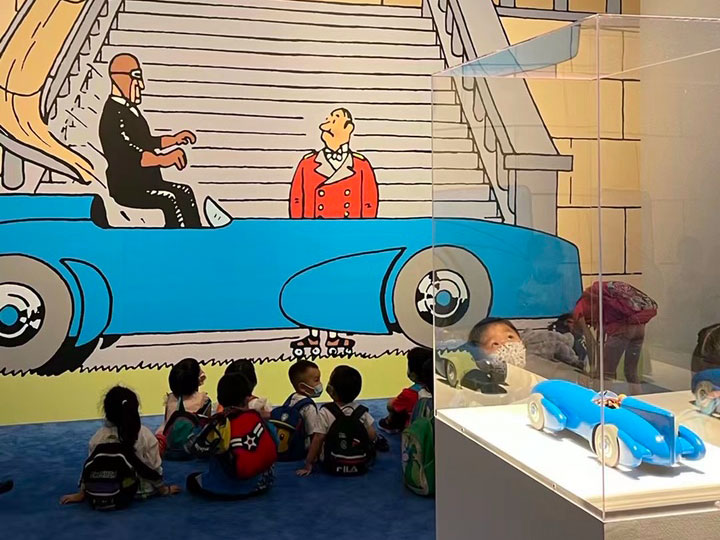 The vice-mayor of Shanghai visited the exhibition

On 15 September, the vice-mayor of Shanghai visited the Tintin and Hergé exhibition. The story of the making of the album The Blue Lotus in the 1930s with the help of the Chinese sculptor Zhang Chong Ren (Chiang Chong-jen) was of particular interest to the delegation. As a result of their exchanges, the Chinese artist became friend with Hergé and had inspired the father of Tintin to create the character of Tchang.
© Hergé - Moulinsart 2021

On Saturday 11 September, a workshop was held at the exhibition. The speaker and draughtsman first compared the architecture of houses in Brussels and Shanghai. He then taught the participants how to draw the Brussels residence of Tintin's father, Hergé. 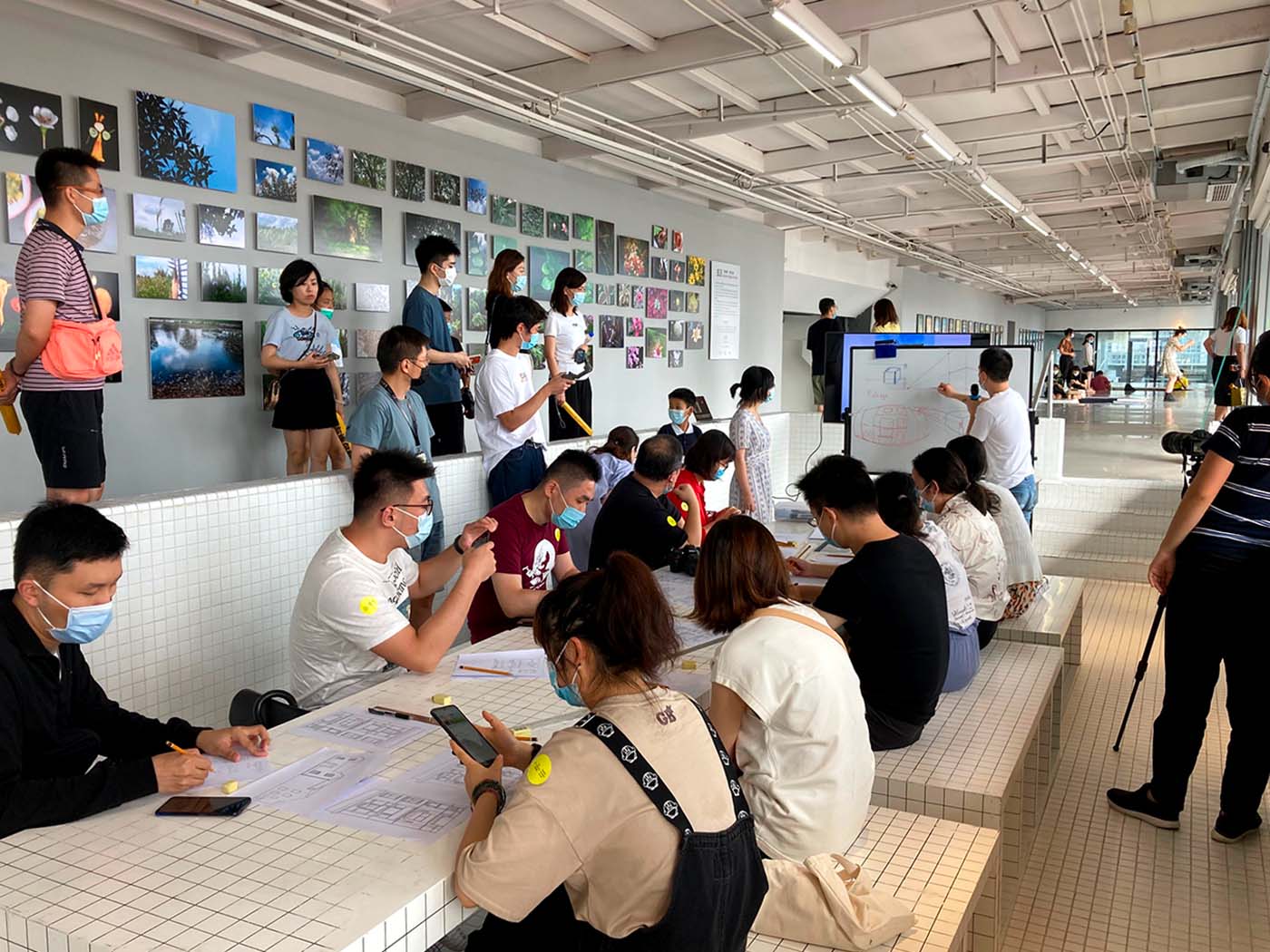 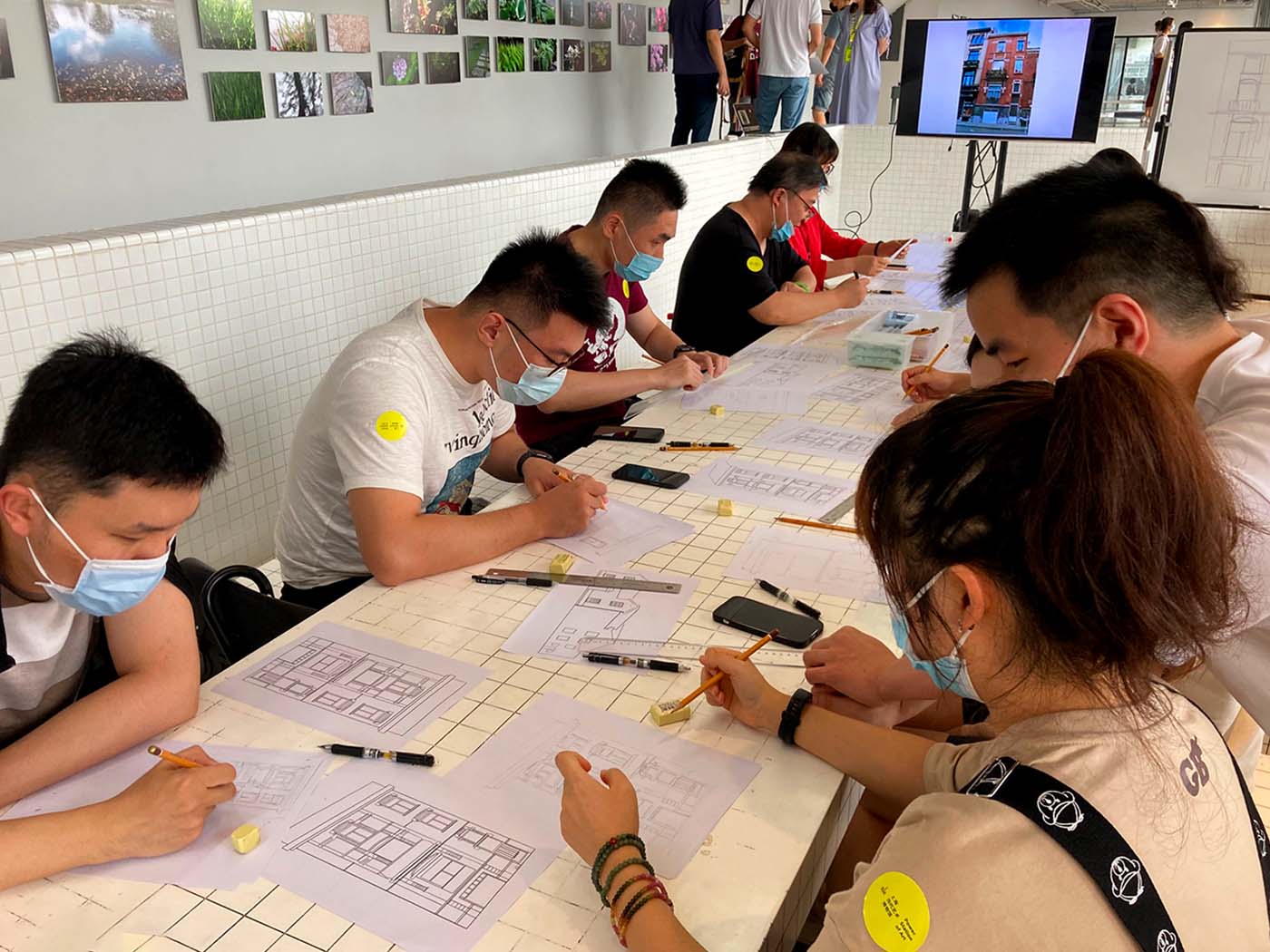 The impressive Rocket arrives at the exhibition

The famous checkerboard rocket has arrived in Shanghai. Standing 6m high, it is a highlight at the Power Station of Art. 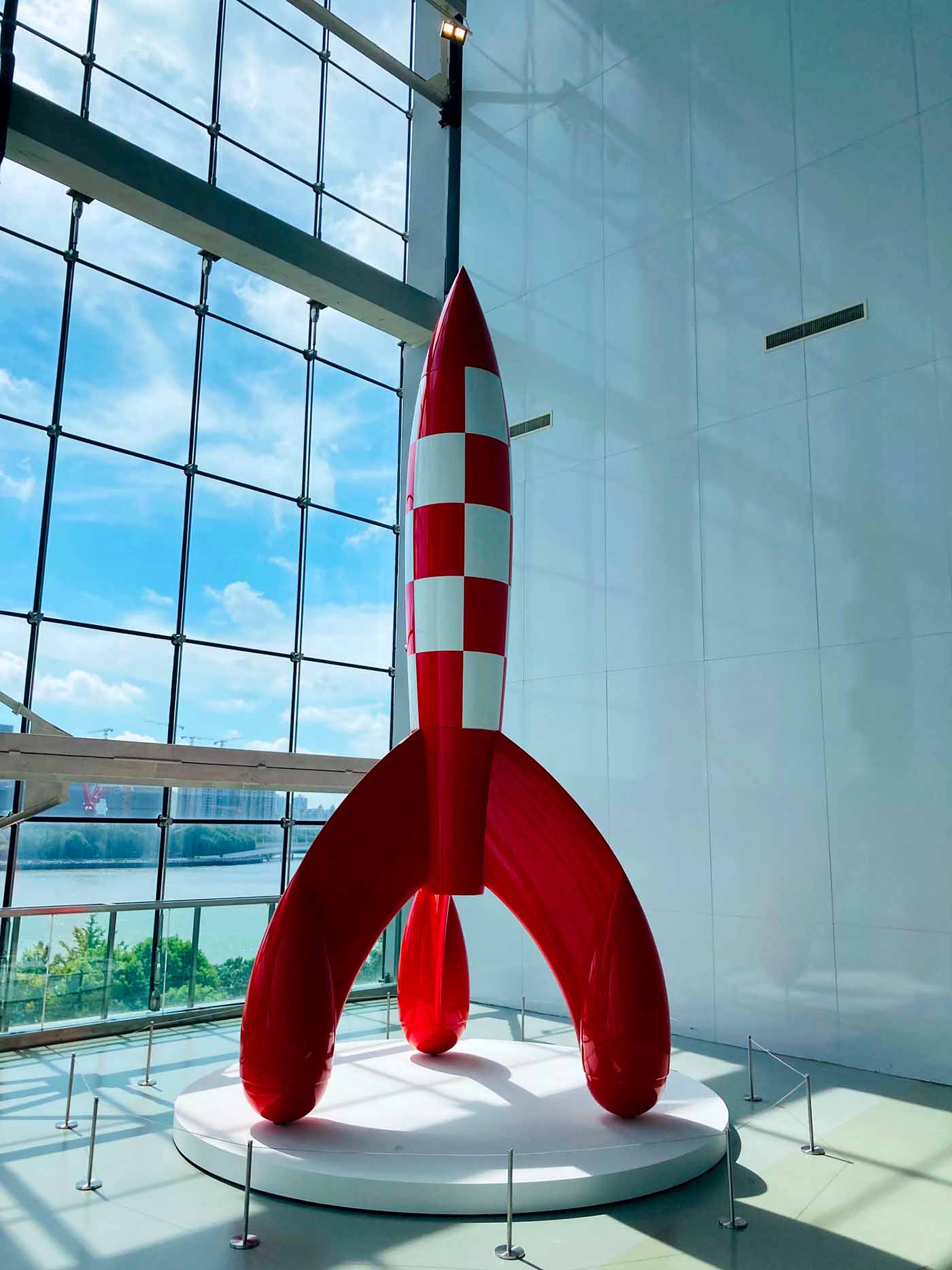 This Saturday 28 August 2021, the Tintin Returns to Shanghai online conference with Michael Farr took place. The former British reporter has written several books about The Adventures of Tintin and their creator, Hergé. He has also translated several albums of the series into English.
A total of 2850 people participated in this fascinating online conference. Michael Farr charmed all the participants. The author also spoke about his first meeting with Hergé in 1978. 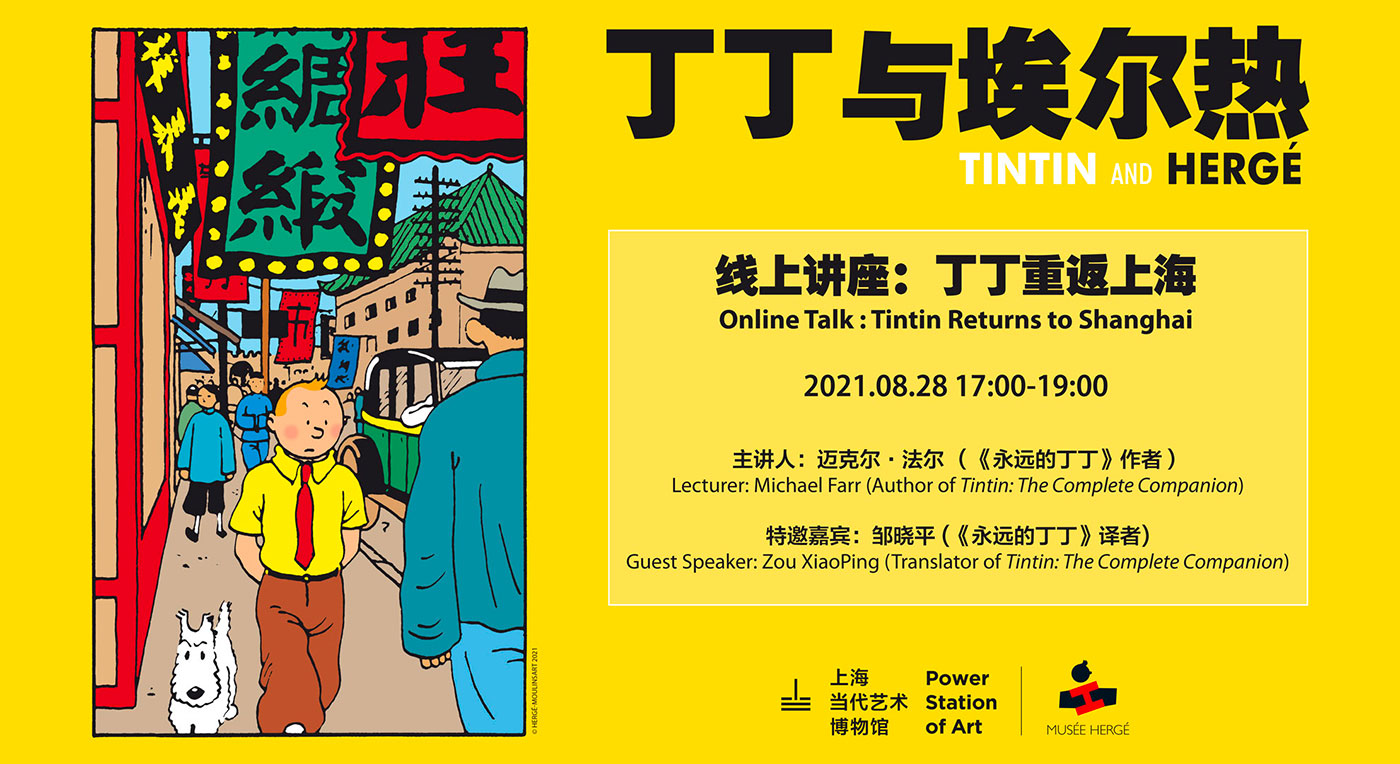 The exhibition welcomed 500 lucky people and 120 journalists for its opening this Friday, August 6, 2021. The visitors were conquered by the richness of Hergé's universe. 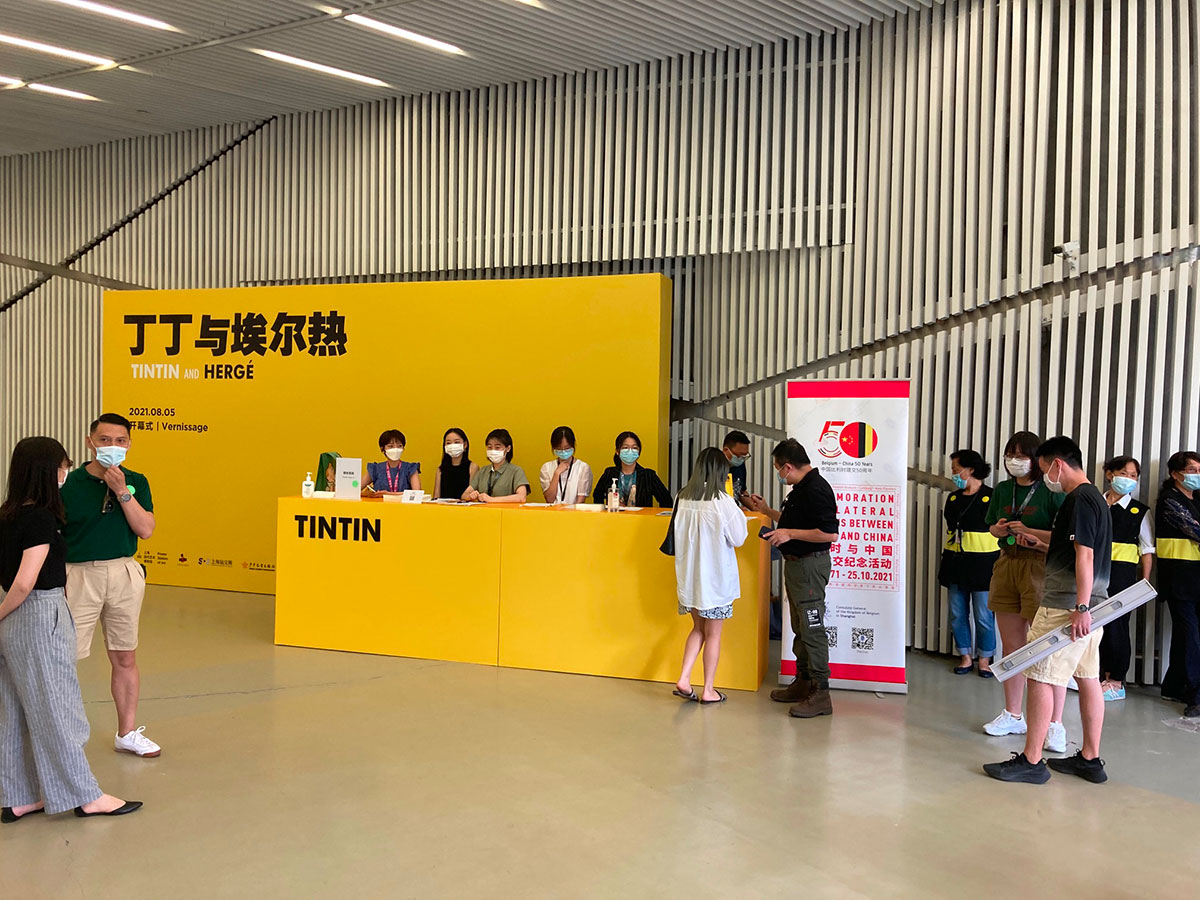 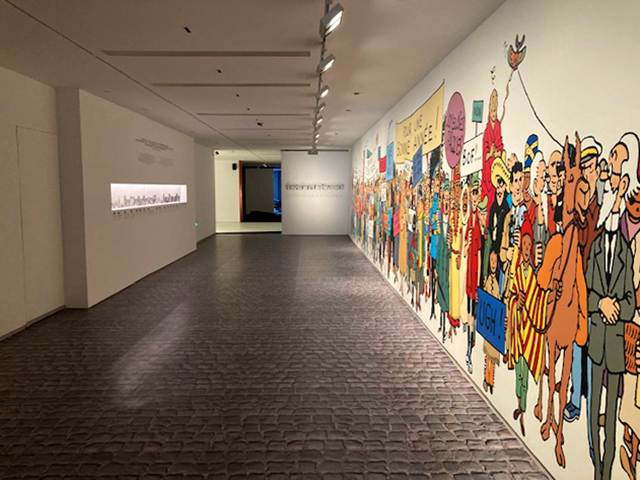 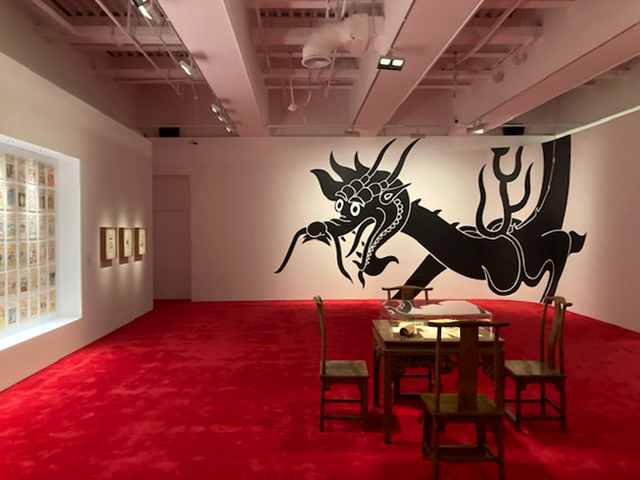 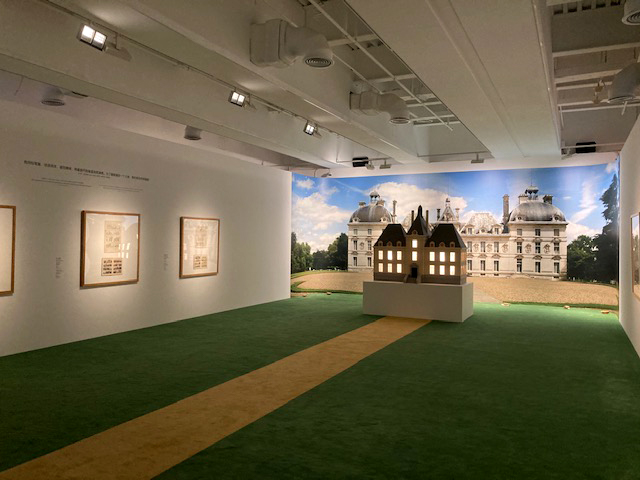 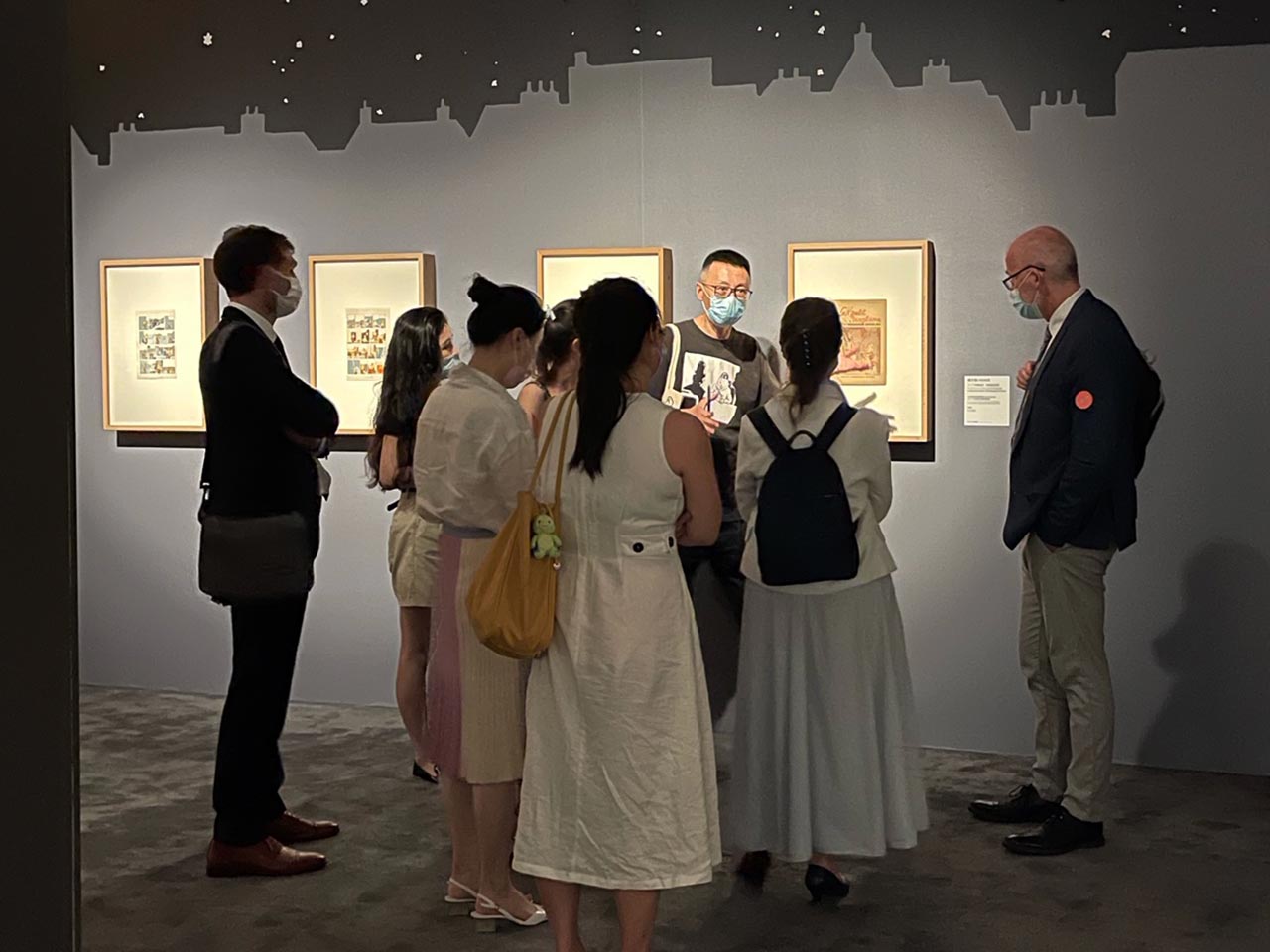 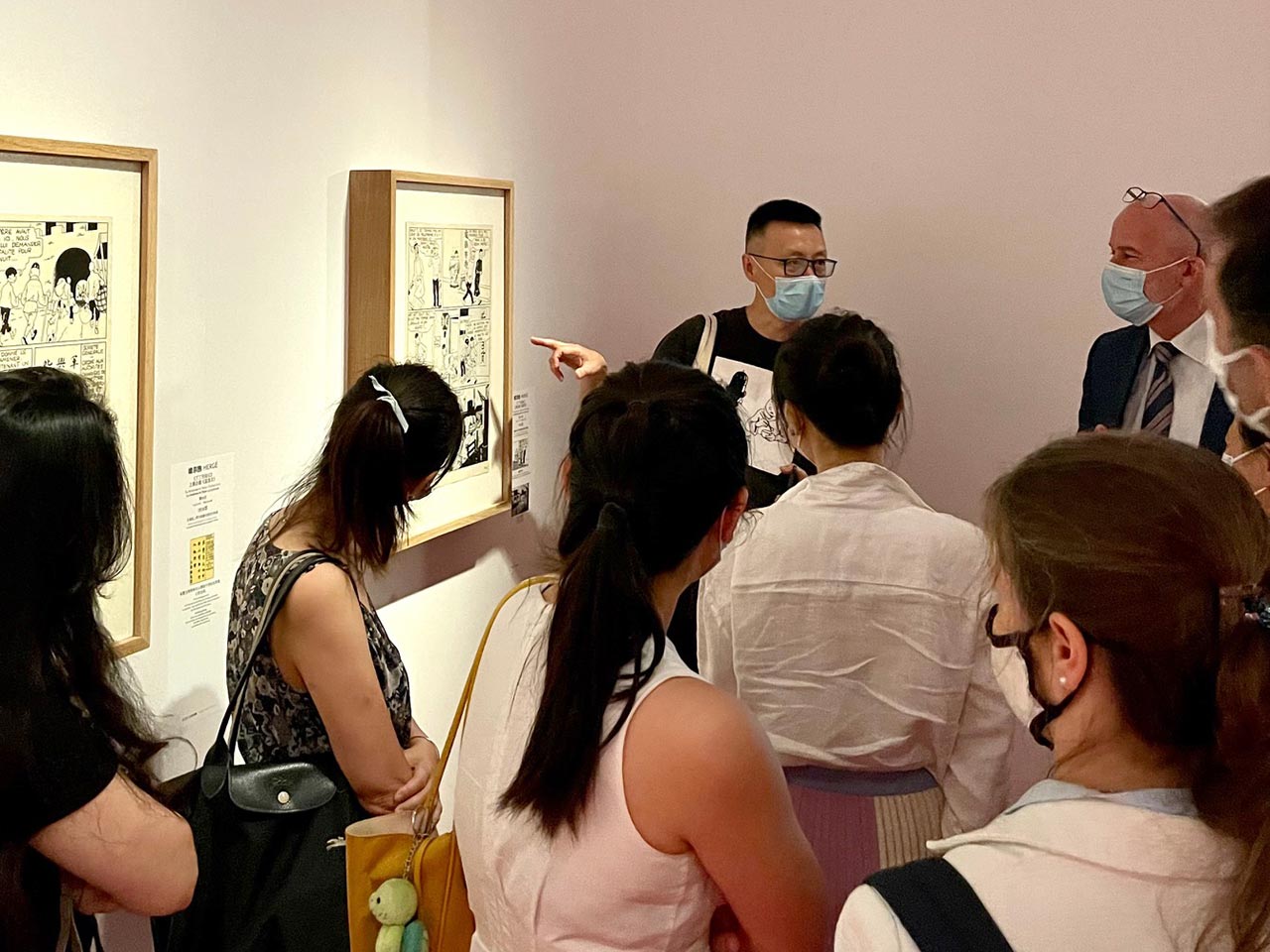 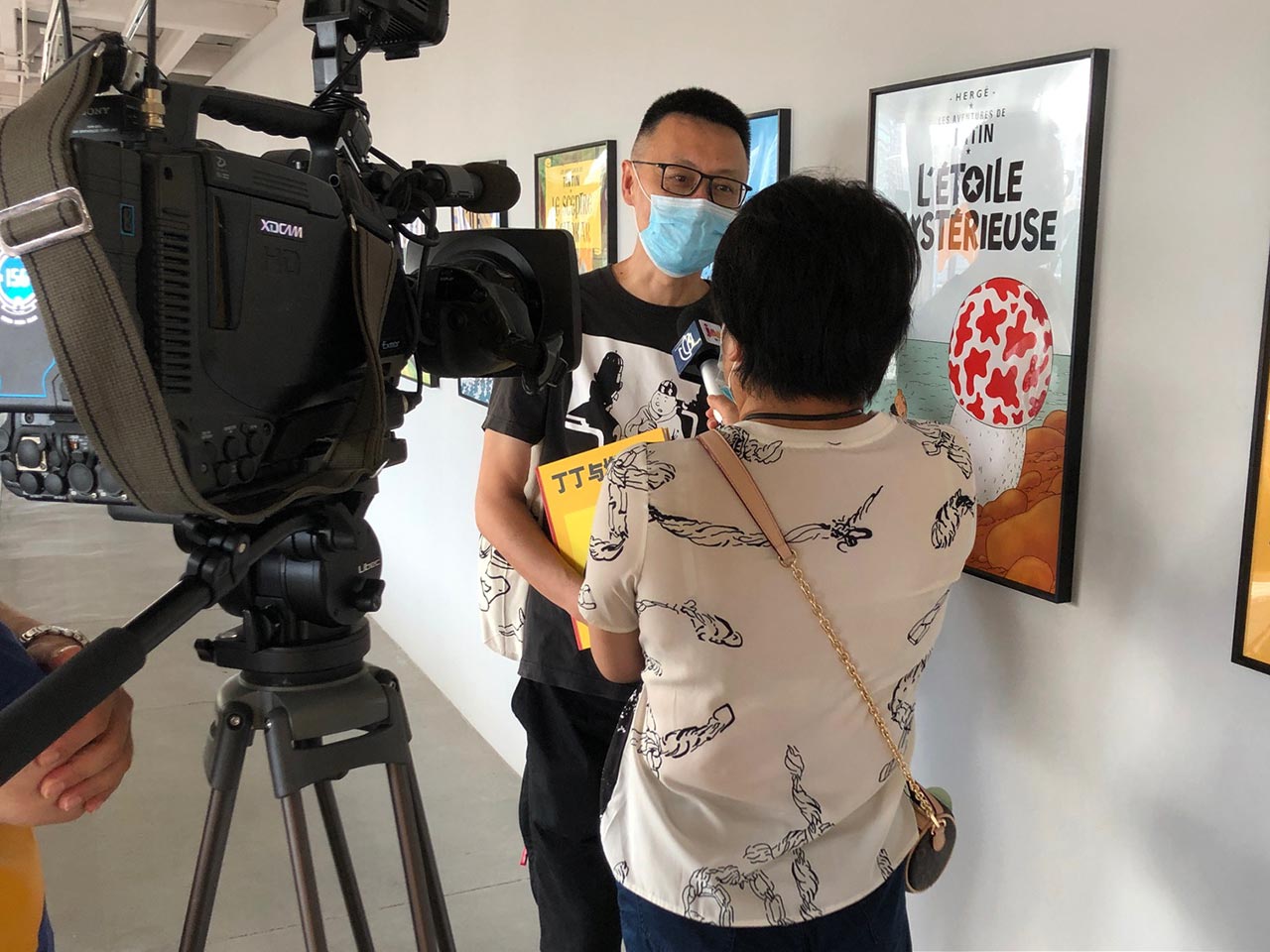 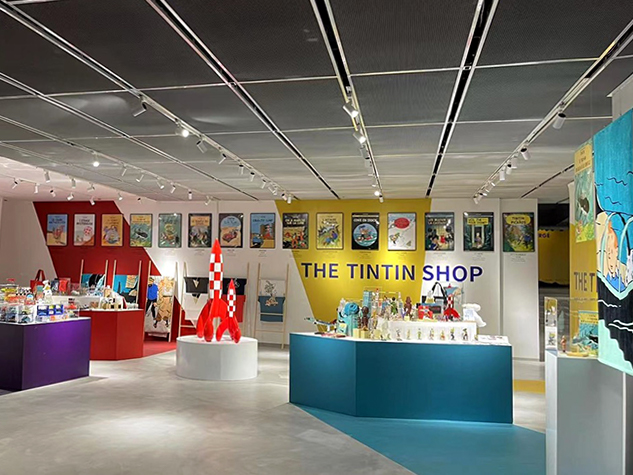 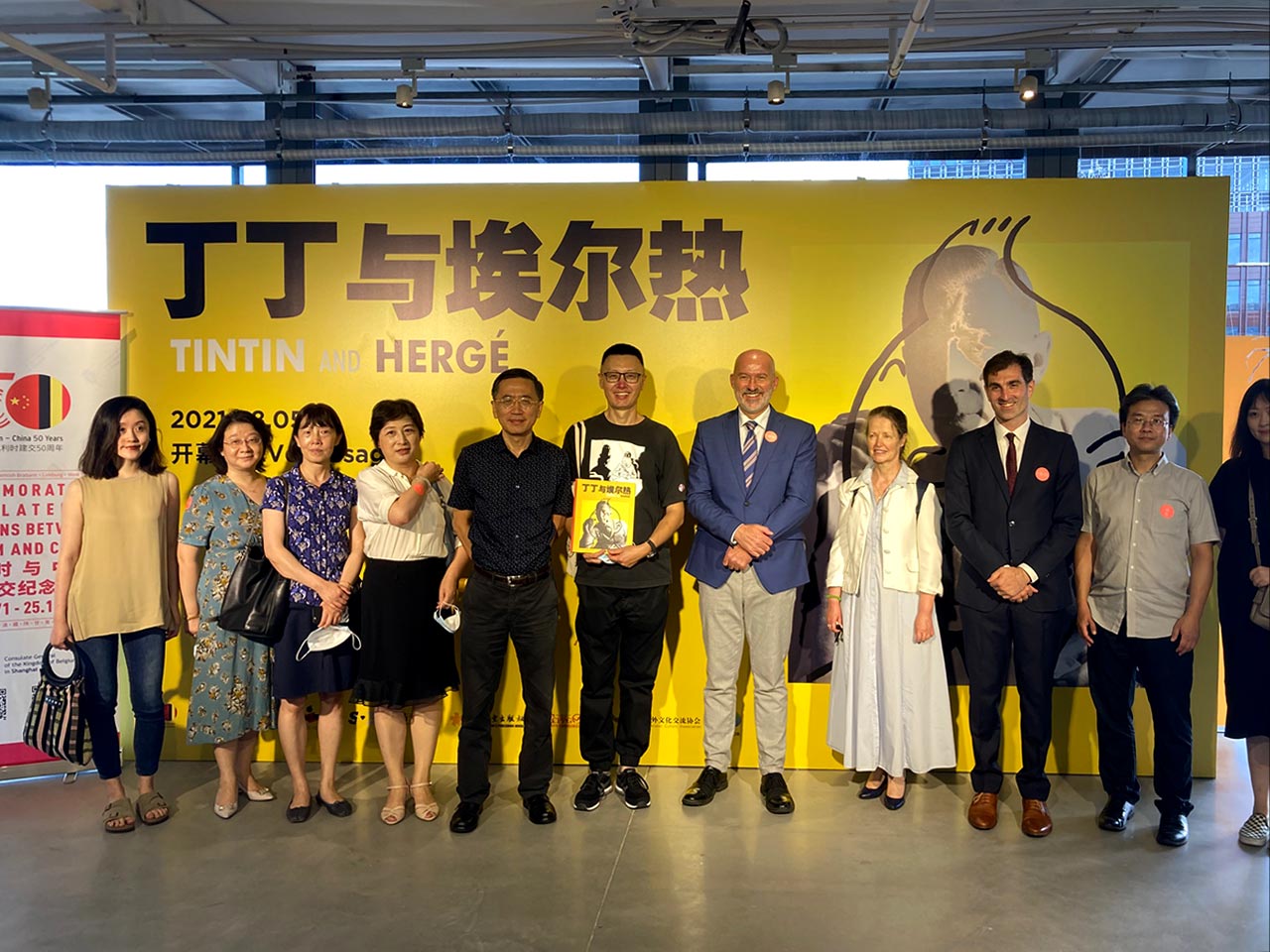 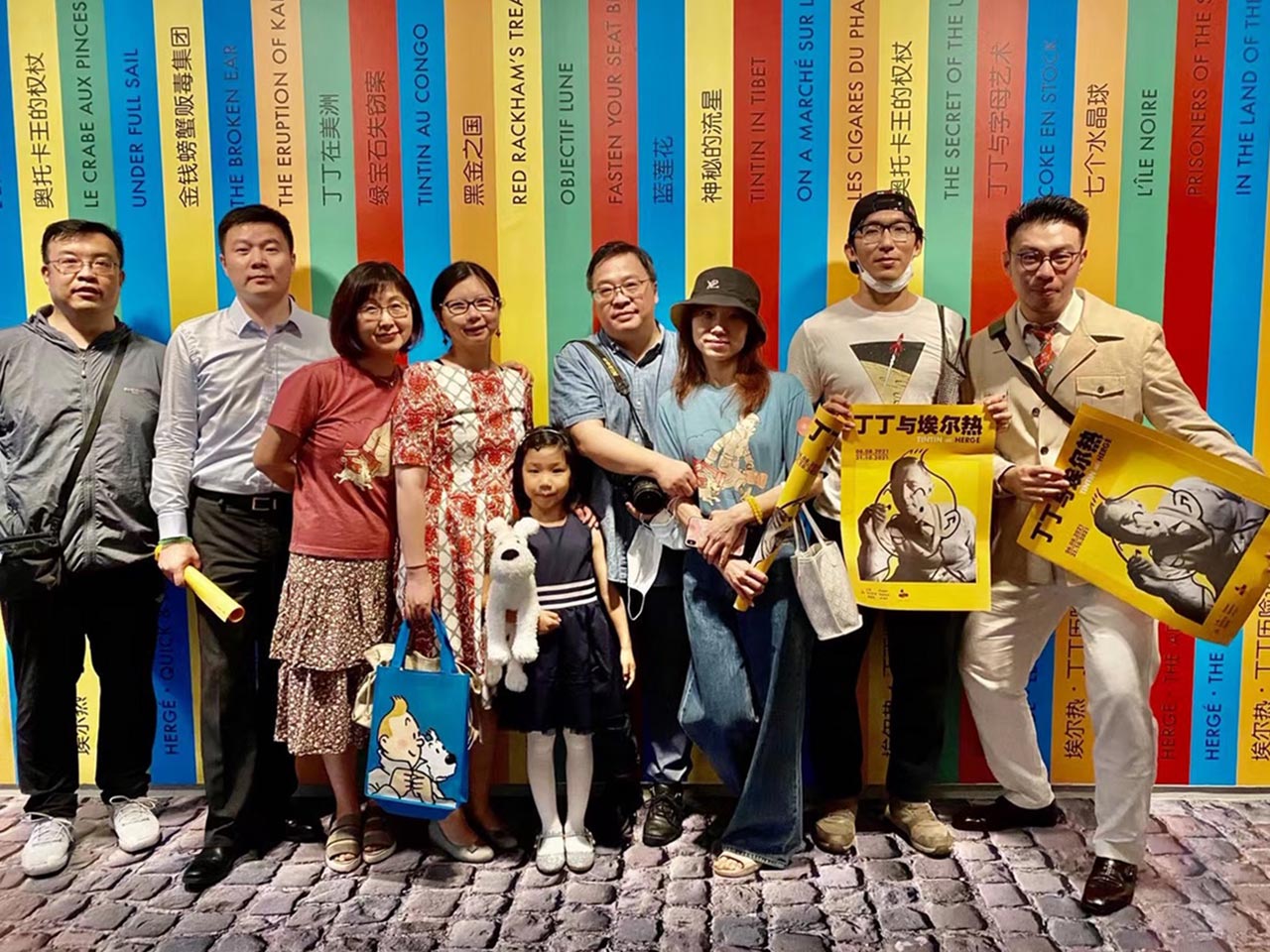 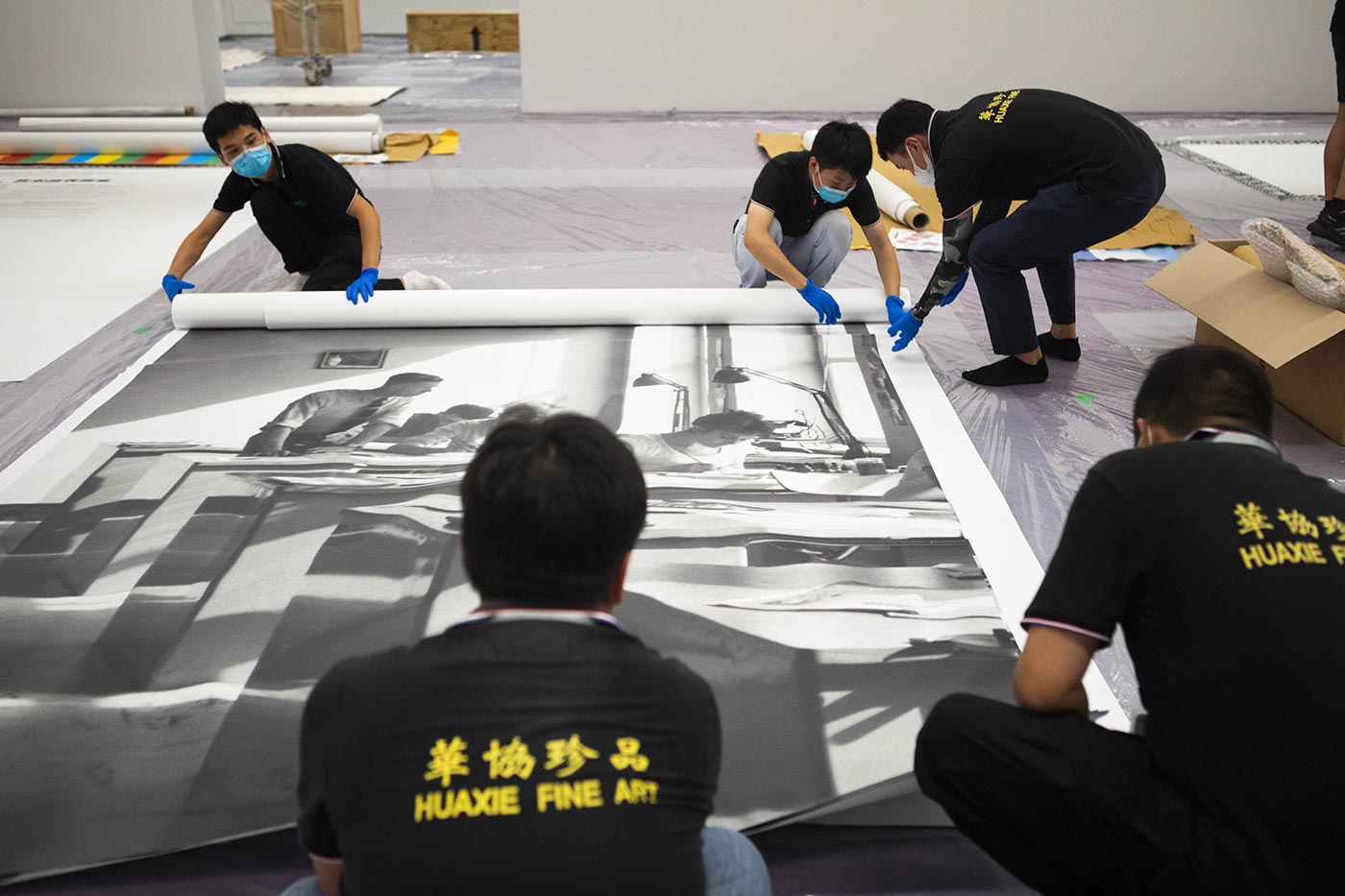 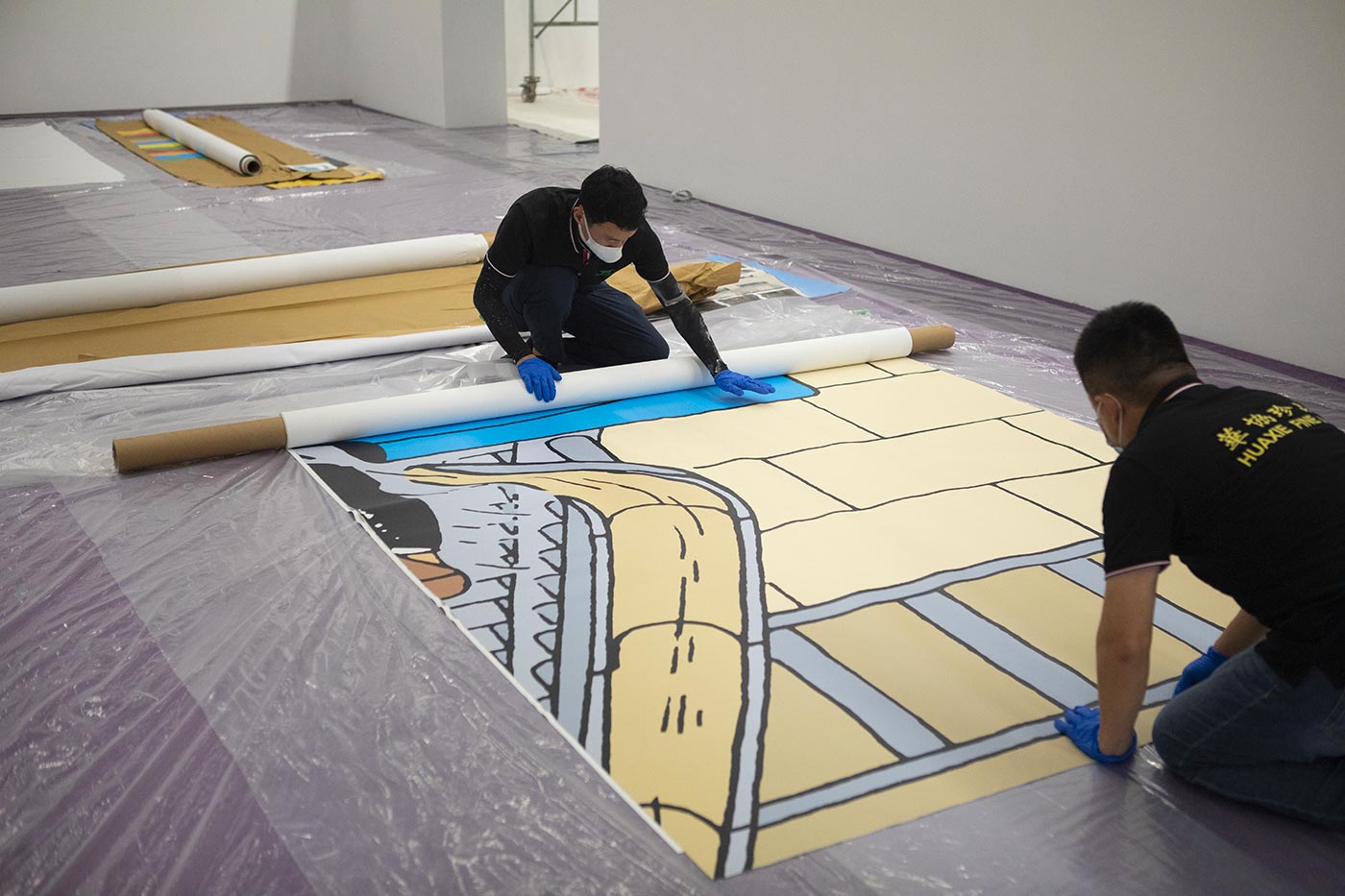 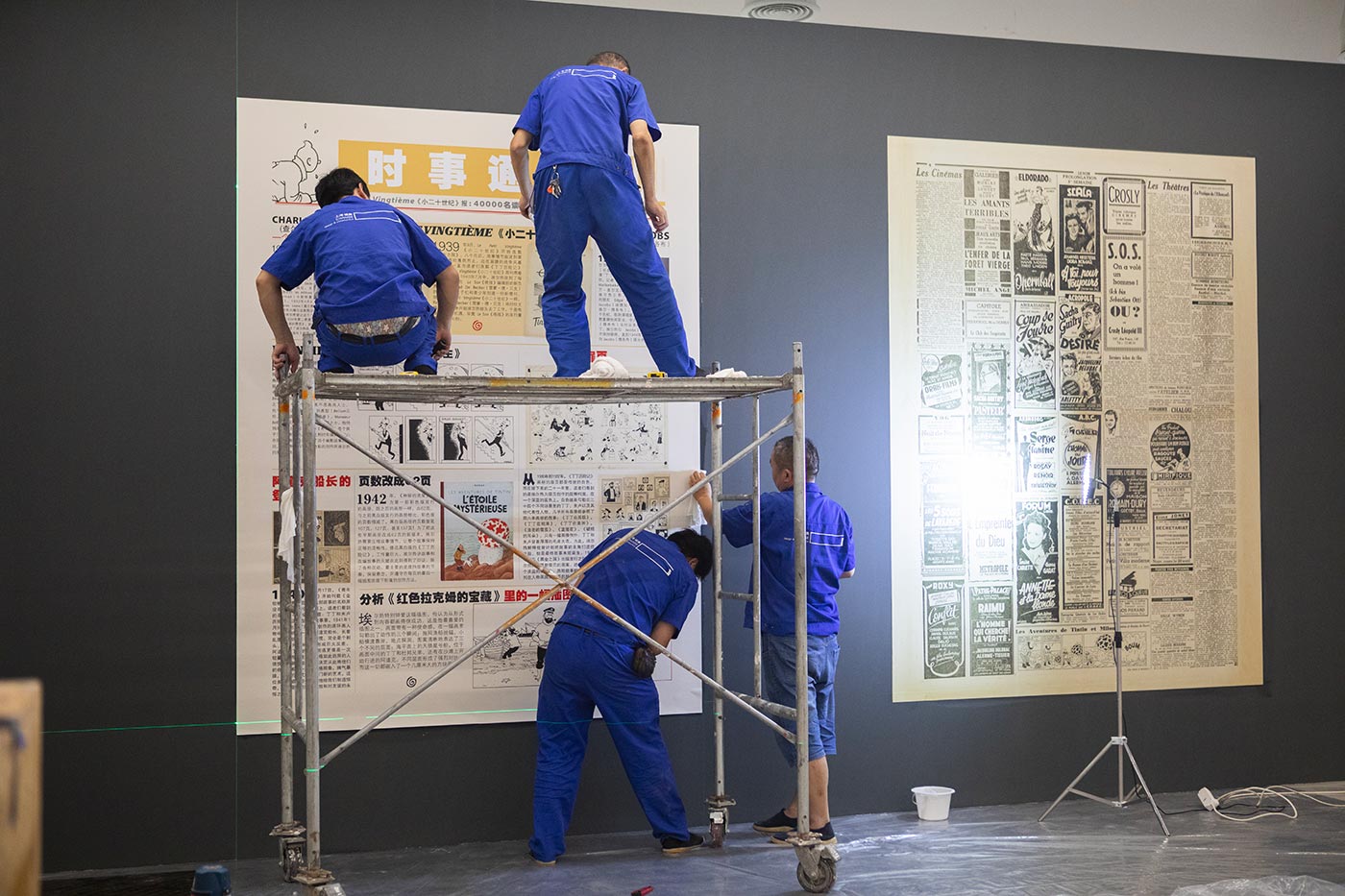 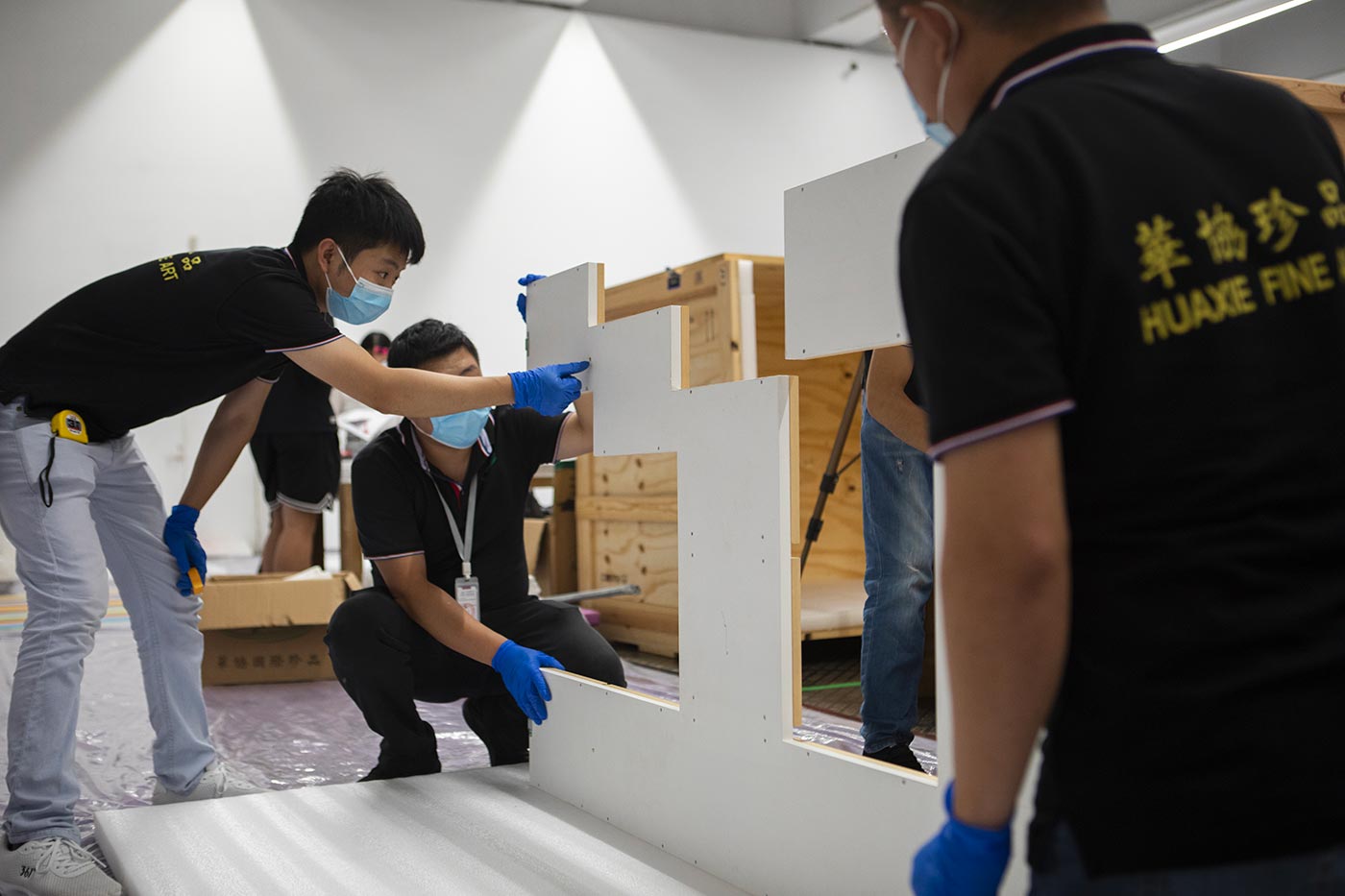 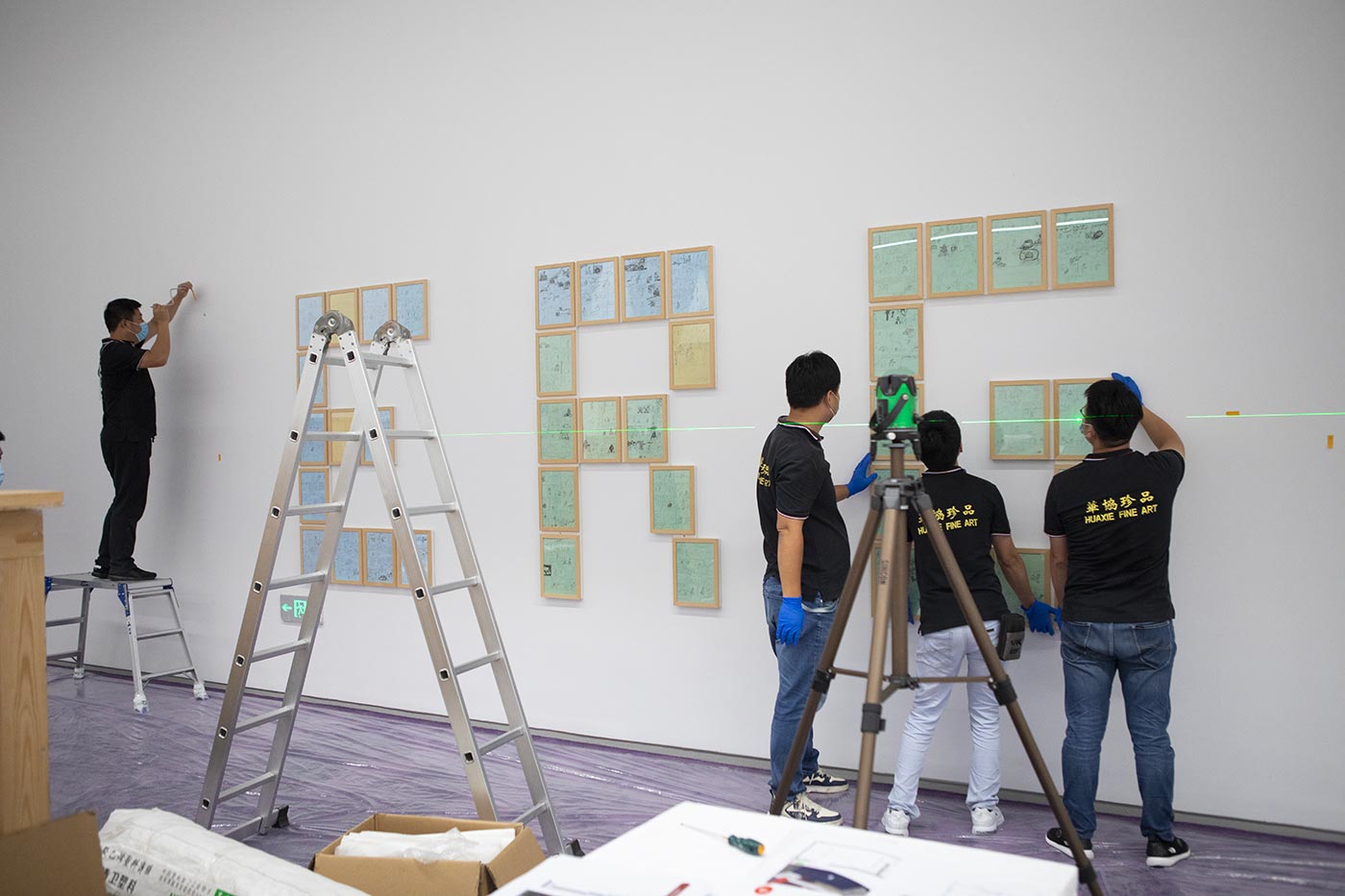 The press conference of the Tintin and Hergé exhibition took place on Tuesday, June 1st in Shanghai. The Consul General Mr. Bruno Jans, the Director of the Power Station of Art, Mrs. Gong Yan, and the President of the Shanghai Diamond Exchange, Mr. Lin Qiang, made a speech. The Director of Moulinsart, Mr. Nick Rodwell also spoke from Europe. 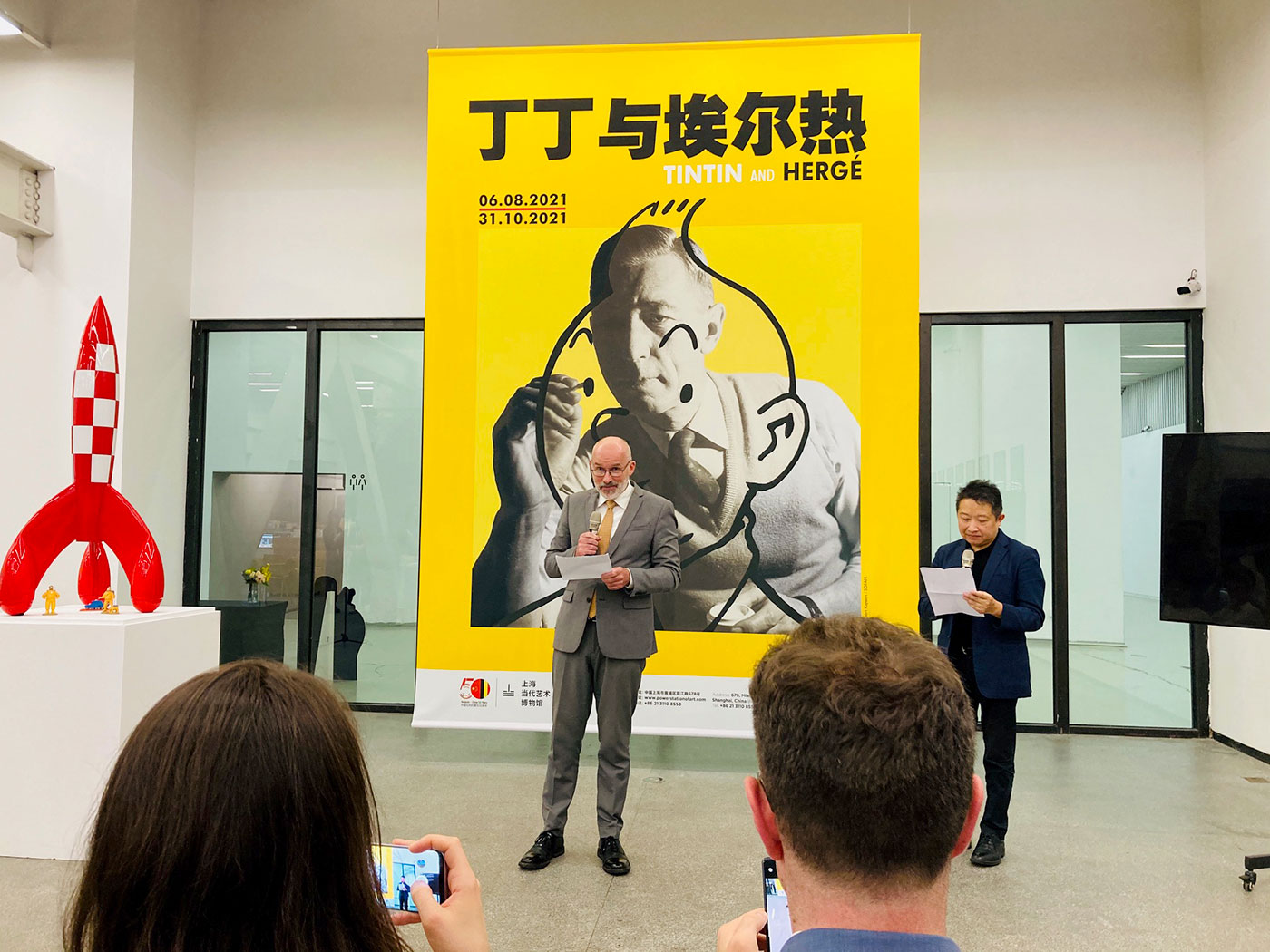 Jointly organized by Power Station of Art and the Hergé Museum, this exhibition will not only showcase the art of Tintin, but also shed light on his creator Hergé (the pen name of Georges Remi), an illustrator who used every means at his disposal and never failed to take inspiration from other art forms. Ancient and primitive civilizations were fascinating to him. He always held the grand masters in high regard. He even branched out into painting himself during the 1960s. It was at this point that he developed a passion for some of the most avant-garde artists of the era, collecting works by Warhol, Lichtenstein, Fontana, Dubuffet, Raynaud and others. In his strips, as in cinema, painting and photography, he explored new angles, framing techniques and perspectives. A whole range of processes helped him compose his stories, powerful sequences and images that have made an impression on generations of Tintin readers.
What is distinctive about Hergé's art is his extraordinary capacity to reflect reality in an inventive and nostalgic fashion, so that the audience can easily immerse into this world, despite its disparate elements. Using simple lines with impressive accuracy, he traces the contours of our existence and gives birth to emblematic characters that represent the great values of society. These characters are faced with all sorts of incredible situations that often have parallels with the history of the 20th century. Meanwhile, the exhibition will also provide an opportunity to reveal a less well-known side to Hergé: his brilliant career as a graphic designer in advertising, through posters that feature a high level of formal creativity.
As a highlight of this exhibition in Shanghai, the friendship crossing over oceans and lands that was hidden behind Tintin's fourth album The Blue Lotus will be unveiled. It all began on 10 January 1929, with the publication of the first Adventures of Tintin in Le Petit Vingtième, and continued to develop over the years and encounters, with his introduction to Tchang Tchong-Jen (张充仁) in 1934 being particularly decisive. While Hergé was working on a story about Tintin in the Far East, this young Chinese student helped him learn about his culture and worked closely with him on The Blue Lotus, Hergé's first acknowledged masterpiece after four stories where you can see him gradually progress towards mastering his art. Without realizing it, Hergé was beginning a fabulous writing career, as an accomplished artist and storyteller. In the story of The Blue Lotus, with the Chinese young boy Tchang Tchong-Jen's (张充仁) help, Tintin successfully crushes the plot of an international opium smuggling gang. In fact, Tchang Tchong-Jen (张充仁), the fictional character, was based on the Chinese artist Zhang Chongren (张充仁), the real friend of Hergé and a famous sculptor born in Shanghai. In 1934, when Tchang was studying at the Académie Royale des Beaux-Arts in Brussels, he was introduced to Hergé and helped the cartoonist create The Blue Lotus. Back then, it was exactly through the iconic episode that tens of thousands of European readers got to know a real China, while Tchang and Hergé’s cross-cultural friendship has been applauded ever since. 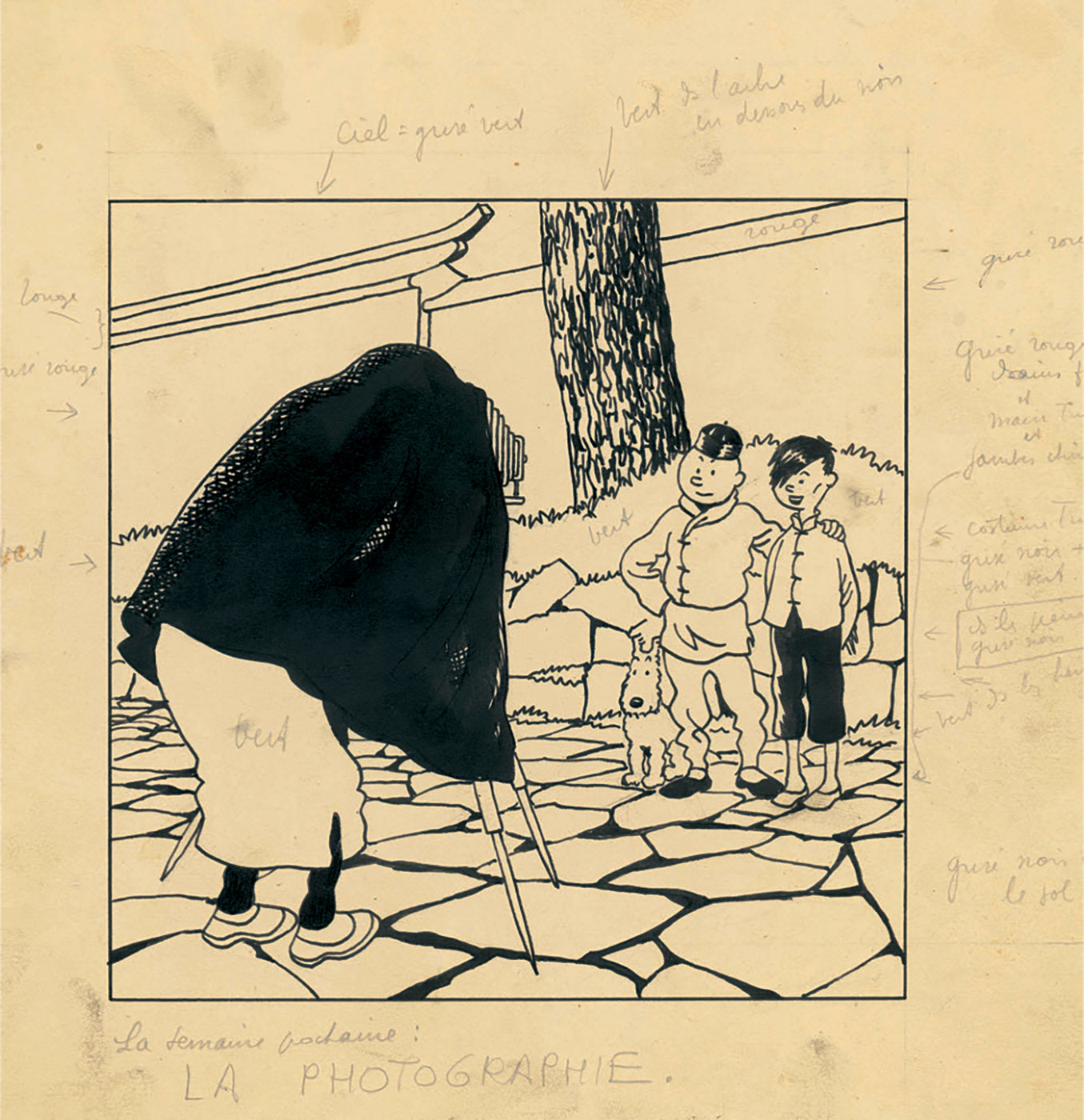 © Hergé - Moulinsart 2021
Going back in time, the exhibition also takes us back to Georges Remi's earliest days, the child in Brussels who before he became Hergé nourished his imagination in the cinema and learning about black and white aesthetics on the big screen. He was just as fond of adventure novels as he was of illustrated stories and the comics that were emerging from France and the United States. His love of drawing dates back to these years, and his first illustrations, which appeared in the Belgian Catholic press, already demonstrate his gift for storytelling.
Created by Fanny Rodwell in 2009 in Louvain-la-Neuve near Brussels, which opened in 2009, the Hergé Museum is now joining forces with Power Station of Art in Shanghai to reveal the different facets of Hergé's work through his original drawings, the paintings he surrounded himself with and photographs, evoking the encounters that guided his life and his artistic vision. His interviews, writings and testimonials explain his choices, bringing his doubts, his vivacity and his limitless curiosity to life, tracing the career of a true artist.
PSA Trailer
Tintin and Hergé
Read more about :

1 review
Log in or create a Tintin.com account to write a review.
wow,I really want to visit it in Shanghai.