"Alcazar" is a Spanish word designating a fortified palace. Like the "Alcazars" from Sevilla and Toledo, these palaces were built by the Moors - a people of Berber origins - during their conquest of Spain (12th and 13th century). 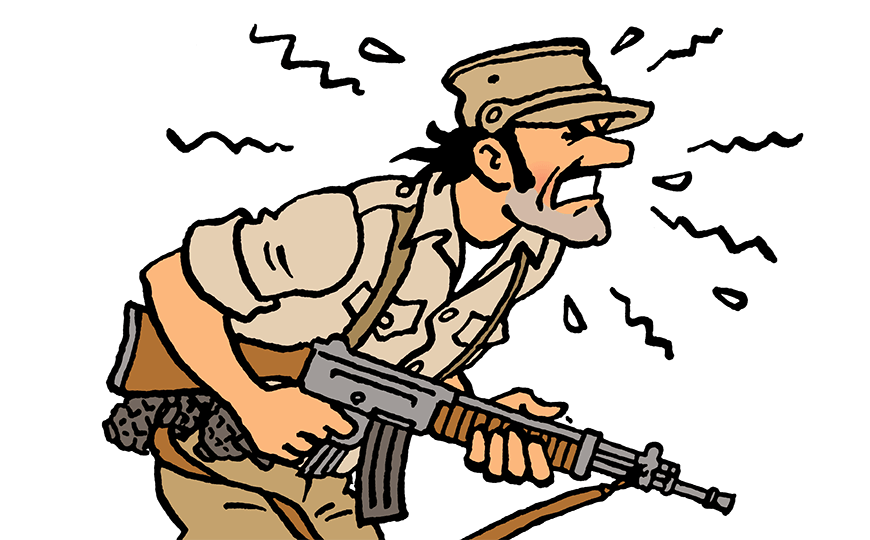 Officer of the highest rank - general - commander of the revolutionary troops which overthrow the dictatorship led by another general - Tapioca. Those two - Alcazar and Tapioca - will play ping pong with power and overthrow each other. General Alcazar distinguished himself as a knife thrower in the greatest music halls under the name of Ramon Zarate.

Apart from the game of revolution, Alcazar plays chess and smokes cigars.

A bit of history

The Broken Ear Tintin's adventure in which Alcazar makes his first appearance, was inspired by a bloody conflict which opposed Bolivia and Paraguay in the 1930's as they were fighting over the "Gran Chaco" territory which supposedly possessed large oil resources. This war was called the "Oil War". The Gringos (American Standard Oil) and other Western multinationals (Royal Dutch Shell) were involved in this conflict. But the real motive for the war was Bolivia's desire to get better access to the Paraguay River. The "Gran Chaco" became under Hergé's pencil stroke the "Gran Chapo".
San Theodoros will return to the front page in Tintin and the Picaros where Hergé will caricature the interference of the commercial powers in the political affairs of third world countries. (Michael Farr Tintin, Le rêve et la réalité, Ed. p.195).

It is most probable that Peggy is Alcazar's legitimate spouse, his "dove".This frightening creature who seduces Calculus is an "American and holds some kind of position in the Ku Klux Klan". (Numa Sadoul Tintin et Moi, entretiens avec Hergé, Ed. Casterman).
Although it is not said in the album, Peggy is the daughter of Basil Bazarov, the arms dealer who appears in The Broken Ear. "Hergé's most savage and transparent satire is reserved for an international arms dealer of Greek origin who made his fortune from the industry of death of the First World War and afterwards, Basil Zaharoff".

A word from Hergé

"Alcazar's ambiguity is simply that of a politician. He is Tintin's friend or foe depending on whether Tintin serves his cause or if he is an obstacle to it. Reasons of State or more coarsely, personal ambitions, that is what dictates the General's behavior..." (Numa Sadoul, Tintin et Moi, entretiens avec Hergé, Ed. Casterman, p205).

6 reviews
Log in or create a Tintin.com account to write a review.
hahaha i am tapioca and i am better than you
im peggy btw
In Tintin and the picaros, he starts yelling at his soldiers and gets yelled at by his wife Peggy.
Alcazaaarrrr!!!
First he over threw General Tapioca
then he threw knives at a Peruvian
I like general alcázares