Among the delights of The Adventures of Tintin is Hergé's ability to echo the world at large in all its diversity, not only places, but particularly people. In his ever-expanding cast list he lacked, until The Calculus Affair, one type - the proverbial bore. Jolyon Wagg made his debut in The Calculus Affair when he barges into Marlinspike Hall during a violent storm after the windows of his car have shattered. 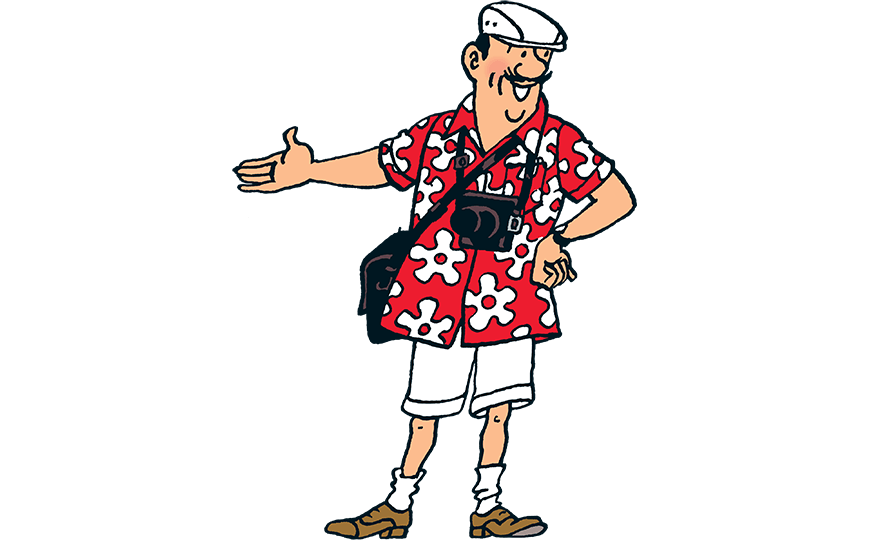 After much thought Hergé came up with the name Lampion - meaning a Chinese lantern - for his new character. As usual he listed various possibilities, including Crampon, which he rejected because he found it too explicit and harsh sounding.
He settled on Lampion, giving him the splendid first name Seraphin. The English translators named him Jolyon Wagg.

Jolyon Wagg is an insurance salesman who annoys everyone he meets by trying to sell them unwanted insurance policies.

The creation of Wagg

During an interview with Numa Sadoul, Hergé reminisced: "I found the model for Wagg a long time ago. During the war, when I was living in Boitsfort, I had a visit from a character who came to sell me I no longer know what. He sat down and pointing to my chair said: "Do take a pew!" What marvellous gall!".
Hergé also said that one of the special characteristics of some people in Brussels was to "wear both a belt and braces," which he added was "an excellent and convenient double security for an insurance salesman.".

Wagg's family is ghastly. His wife, children, mother - in-law - that whole small world is frightful! In The Calculus Affair they ransack Marlinspike Hall. Wagg uninvited, has installed himself at Marlinspike for the rest of the holidays with his ?little brood? comprising wife, mother-in-law and seven frightful children, including twins.

With the creation of the smug, self-satisfied Jolyon Wagg Hergé introduced a champion bore. His boundless, baseless confidence, his supreme vulgarity, the infuriating fixed grin and endless monologues are enough to exasperate not only Captain Haddock. Then as a bonus there are the uncalled-for anecdotes of his Uncle Anatole, suitably a hairdresser or barber, a profession notable for its perceived conversational skills.
Hergé did not find Wagg repugnant: "He is not a malicious man, but he is very pleased with himself and therefore exasperating." Wagg's traits are the complete opposite to those of Tintin and just highlight the value of Tintin's personal characteristics.

Like so many braggarts, Wagg is also a coward. He is visibly perturbed when his whisky glass shatters for no apparent reason and takes it as his cue to put on his jacket and coat and leave. Tintin and Haddock later find him cowering in the bushes in the park of Marlinspike, claiming that someone tried to kill him. Finally, one mention of chickenpox by Professor Calculus, and he packs his bags and hastily departs from Marlinspike with his awful clan.

There is a postscript, a last brief part for Wagg, grinning as usual and sporting his bow tie, in the sketched out Tintin and Alph - Art where, after a long interval,he returns to Marlinspike. He then spots the sculpted "H" that Haddock bought and is having to explain to all and sundry to his great irritation. "My, my, what's that thingummy? Looks like an H, eh?"
He then asks what it is for - the question calculated to annoy Haddock most - and is offended at the answer: "It is a work of art. It is Alph-Art. It is by Ramo Nash and it is for absolutely nothing at all." At which point a perplexed Wagg makes his final exit from the adventures.