Inca Rascar Capac inspired by the name of Incas who ruled Peru and bearing the names of "Manco-Capac", "Maytac-Capac", or "Huascar". It appears in The seven Crystal Balls The Inca Rascar Capac has never existed and was created by Hergé.The mummy of Rascar Capac was discovered by the Sanders-Hardiman expedition as noted at the very beginning of the album. 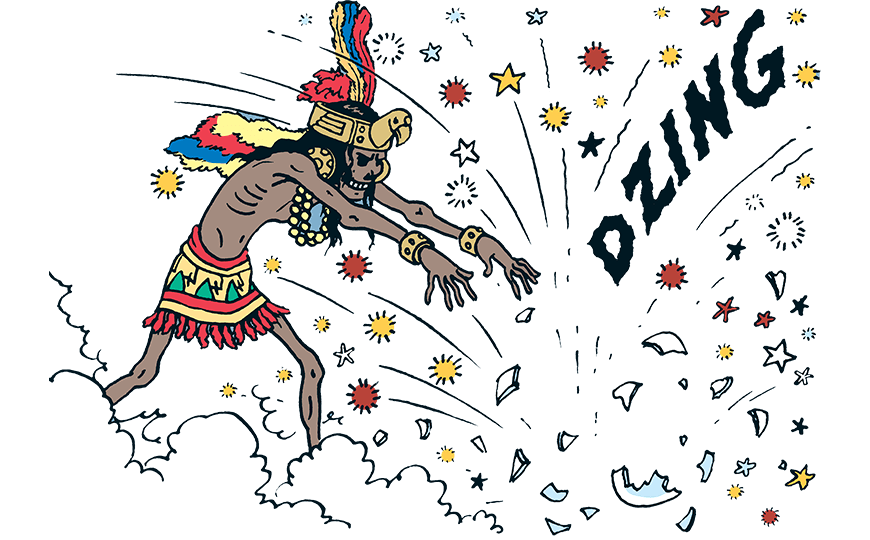 "Inca" or "Lord" was the title borne by the sovereigns in Peru until the Spanish conquest destroyed their dynasty. Unanimously, the Inca was believed to be sent from heaven. His power had no limit but it is said, however, that he was making good use of it, always acting in the interests of his people.

When he created the mummy of Rascar Capac, it seems that Hergé found his inspiration with the Peruvian mummy displayed at the Cinquantenaire Museum in Brussels.
Sergio Purin, assistant curator at the Musées Royaux d'Art et d'Histoire (Royal Museum of Art and History) in Brussels, reminds us that "it was customary that the Incas be mummified and kept in the Coricancha (The Sacred Pen)". From the Catalogue du parcours au Musée du Cinquantenaire du 07/03/96 - 29/09/96 "Quand la Bd s'inspire des objets du Musée".

The Sanders-Hardiman ethnographic expedition discovered and brought back from Peru the mummy of the Inca King known as "He-who-unleashes-the-fire-of-heaven". This act of desecration cast a spell over the members of the expedition.

Was the Crystal Balls affair, which stirred so much public passion, the catalyst for the revenge of a "fanatical Indian" who has sworn to punish those who were bold enough to disturb the tomb of the Inca king Rascar Capac?

5 reviews
Log in or create a Tintin.com account to write a review.
when i was 8 that thing was my living nightmare
He always terrified me!
Eekk
i strongly agree with reydeltin123
This Peruvian mummy as The God Rascar Capac could perfectly be used to an extraordinary album with Tintin with the tittle "The Return of Rascar Capac" or "The revenge of Rascar Capac". It could be a great succes, provided the story could be as well told and drawn as Herge's Tintin Stories.
Drawn by an artist who could create the story in Herge's spirit. You could possibly also make the album, as a tribute to Herge.

The story could be based on the fact that Rascar Capac is angry because Tintin cheated Rascar Capac´'s worshipers by pretending that he was the one who created the solar eclipse in the album "The Prisoners of The Sun".
Therefore, Rascar Capac now wants revenge on Tintin and his friends.