Captain Haddock simply cannot believe it, but human trafficking really is still going on, even in the twentieth century (and today in the twenty-first century). The Red Sea Sharks lifts the veil on the scandal of the modern day slave trade. Herge stayed abreast of current affairs, and as was his style, for this story he wove real-life news into action-packed adventure. 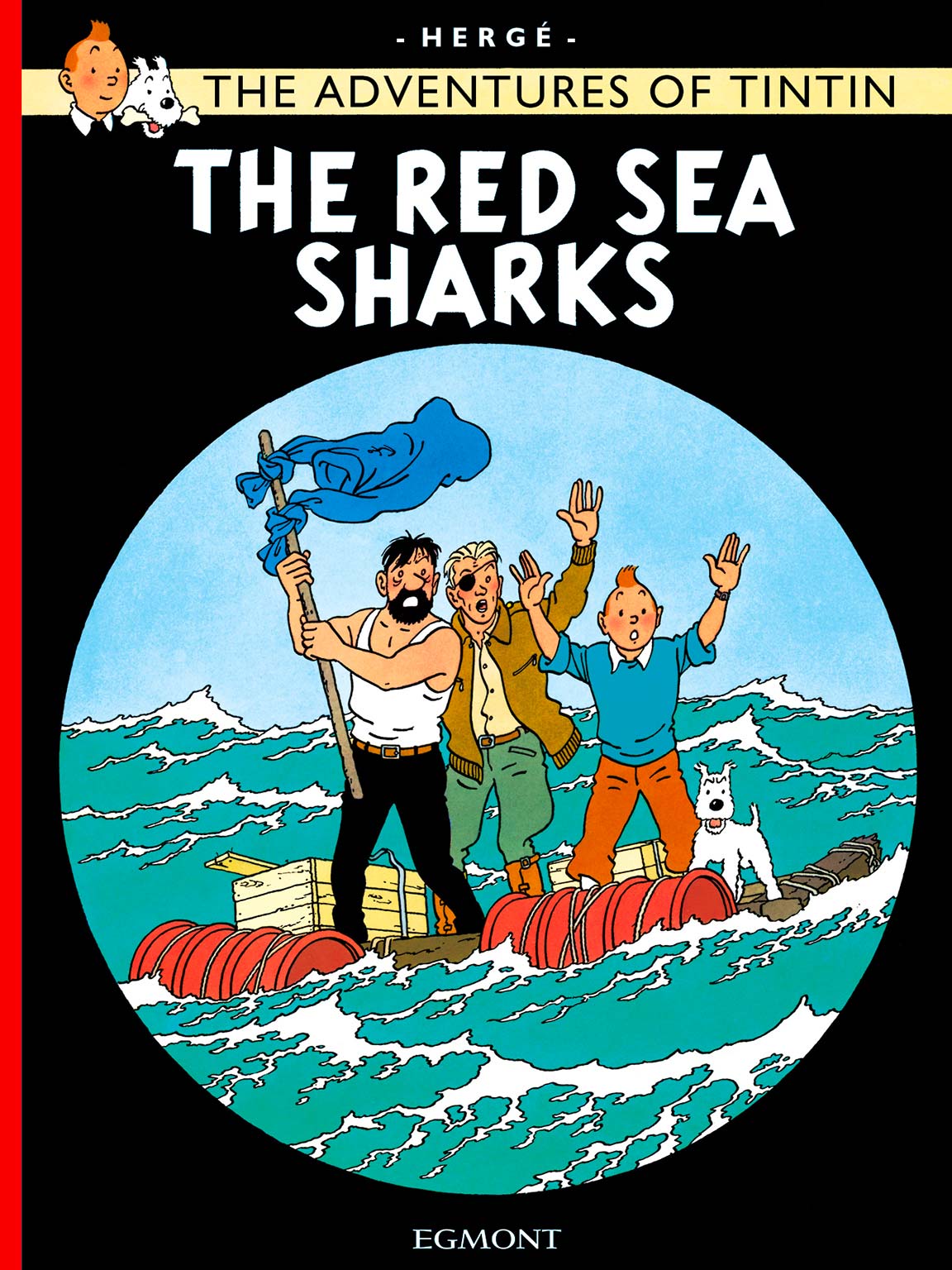 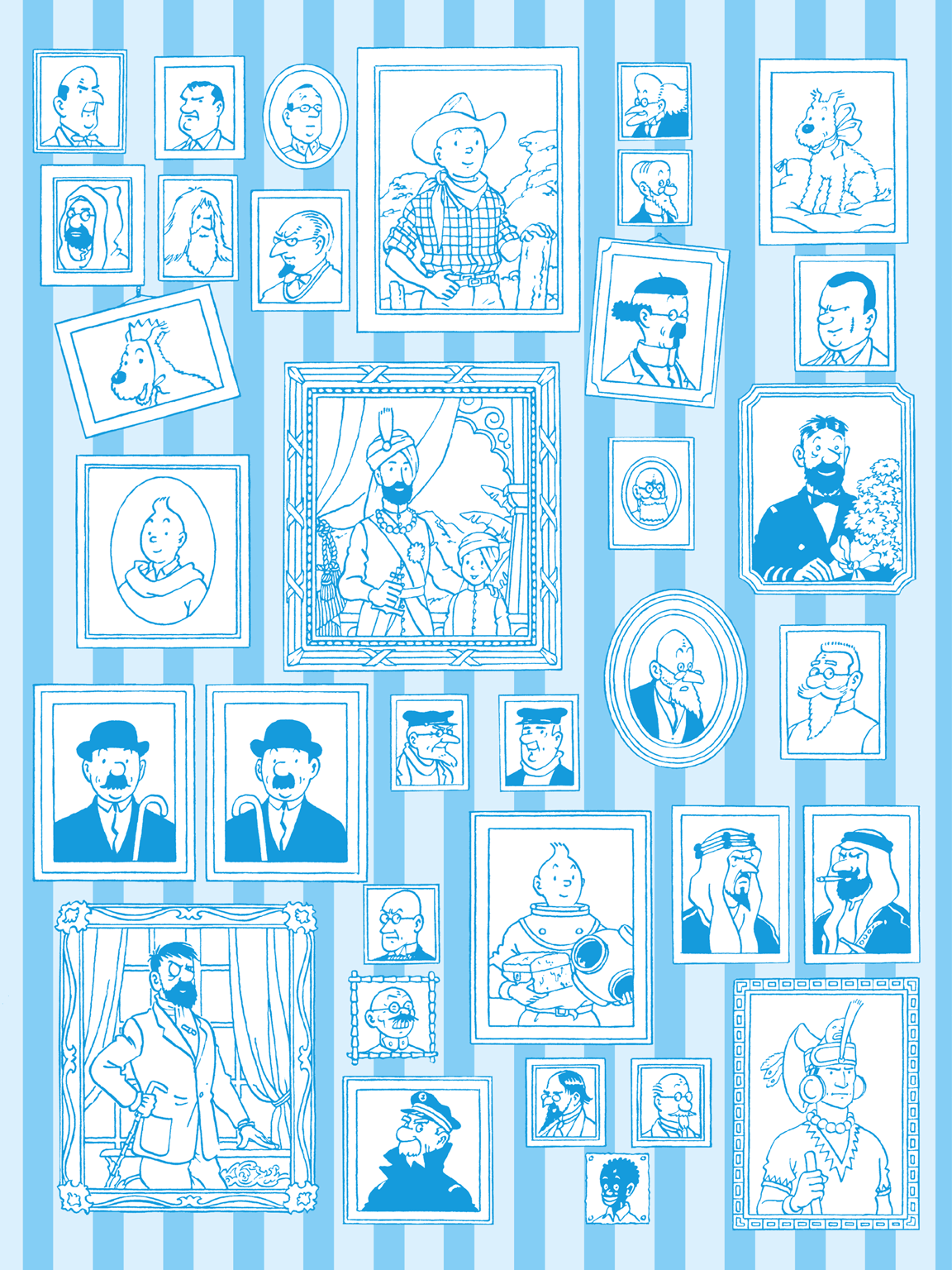 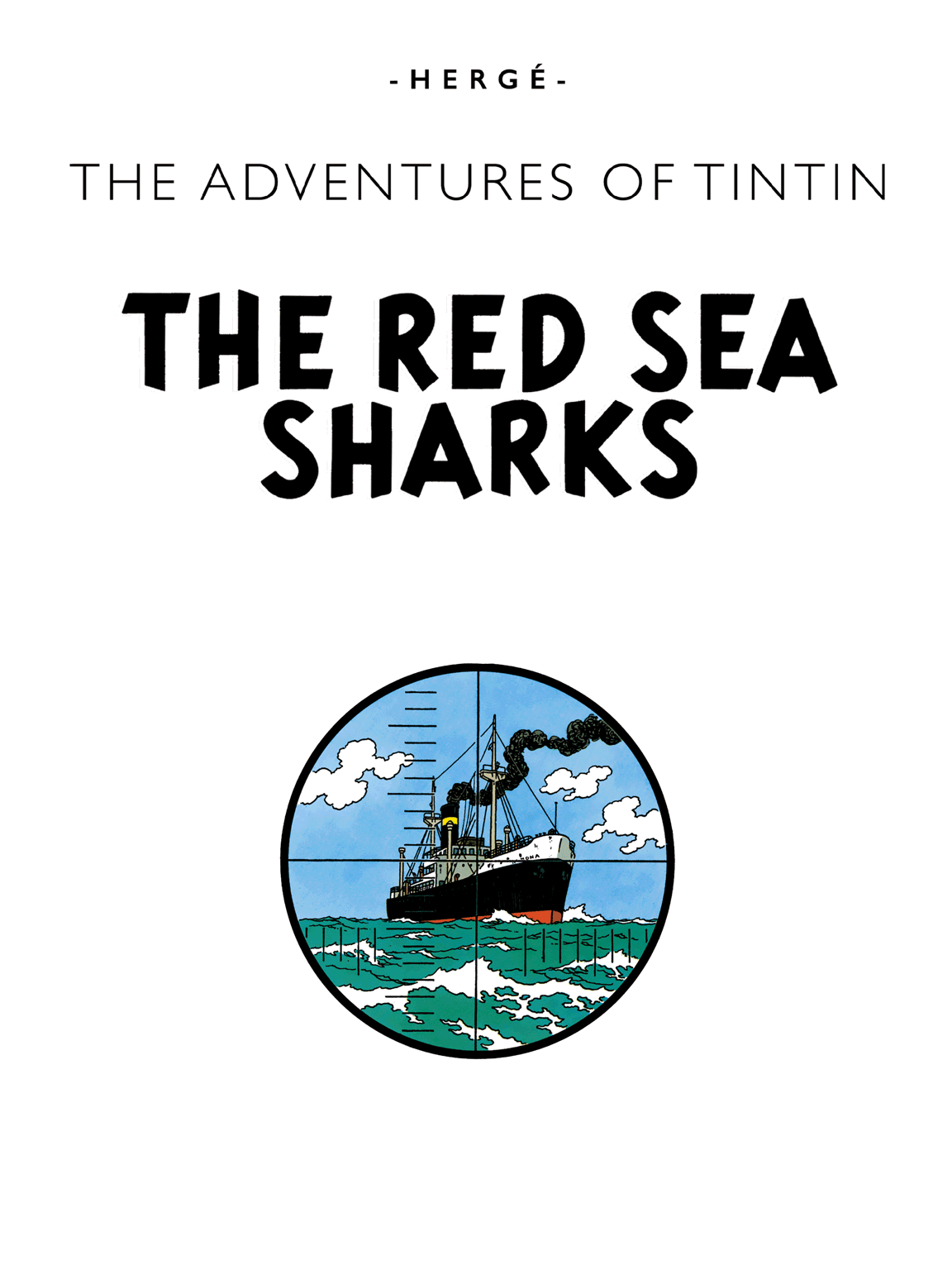 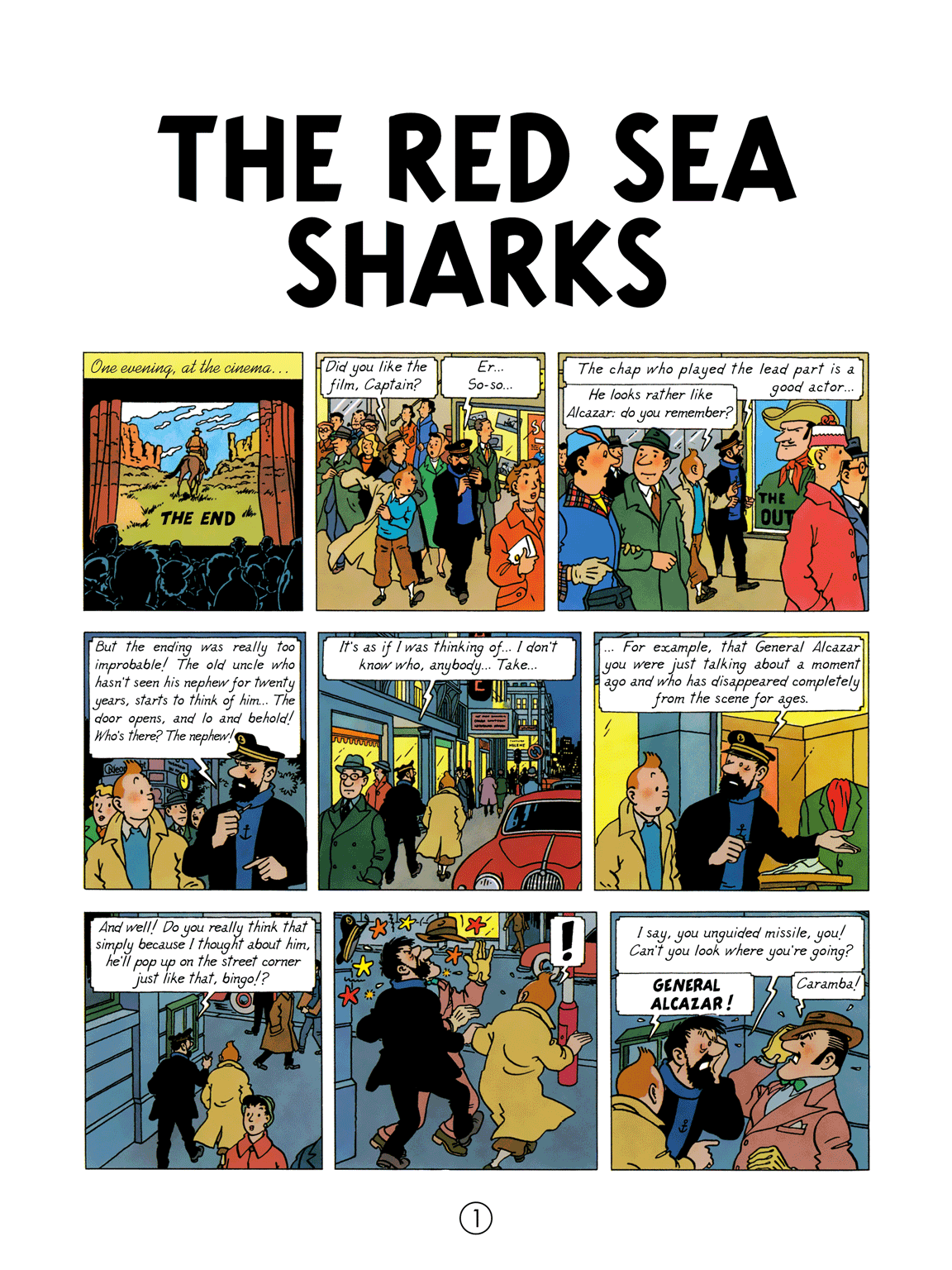 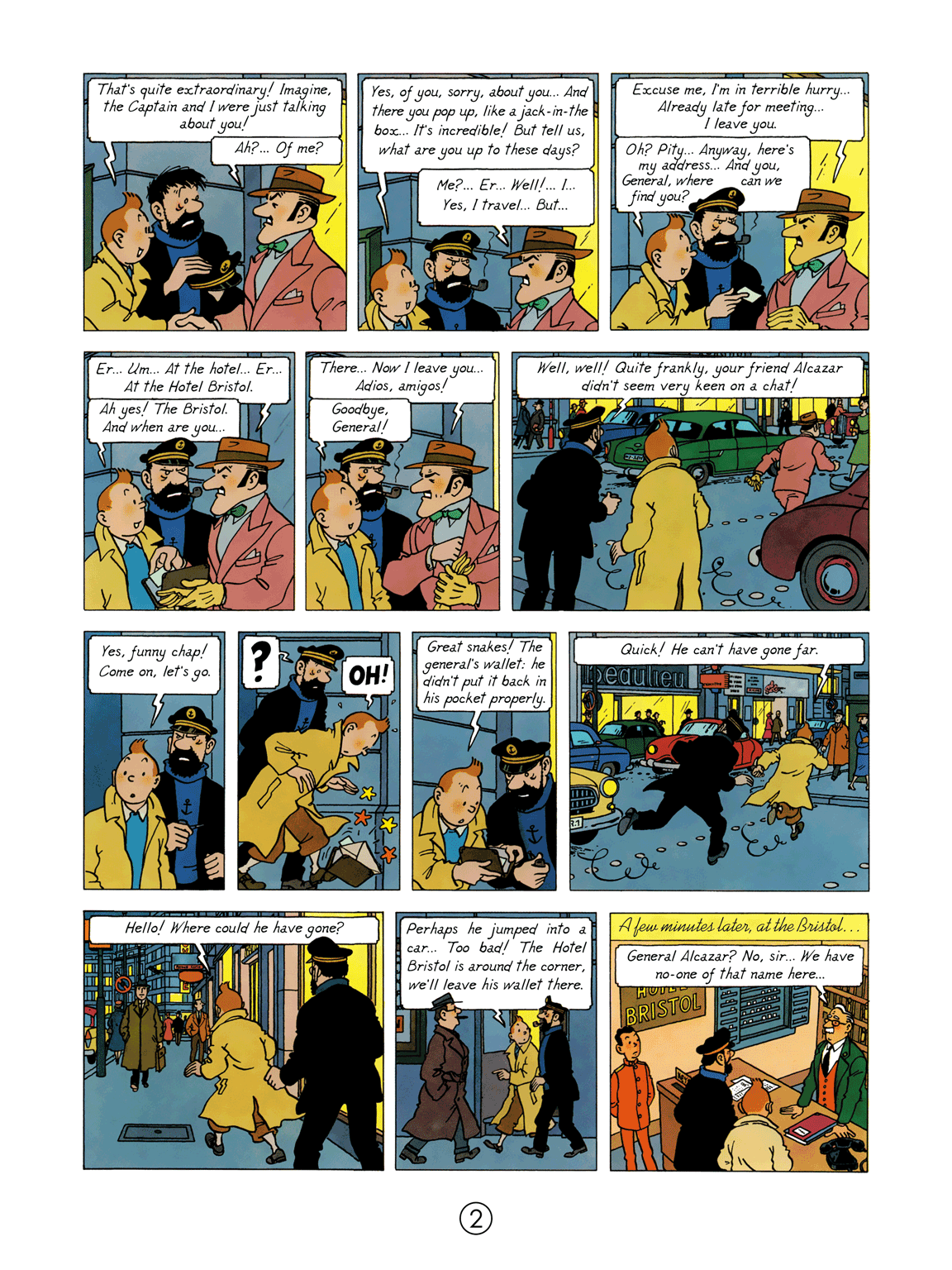 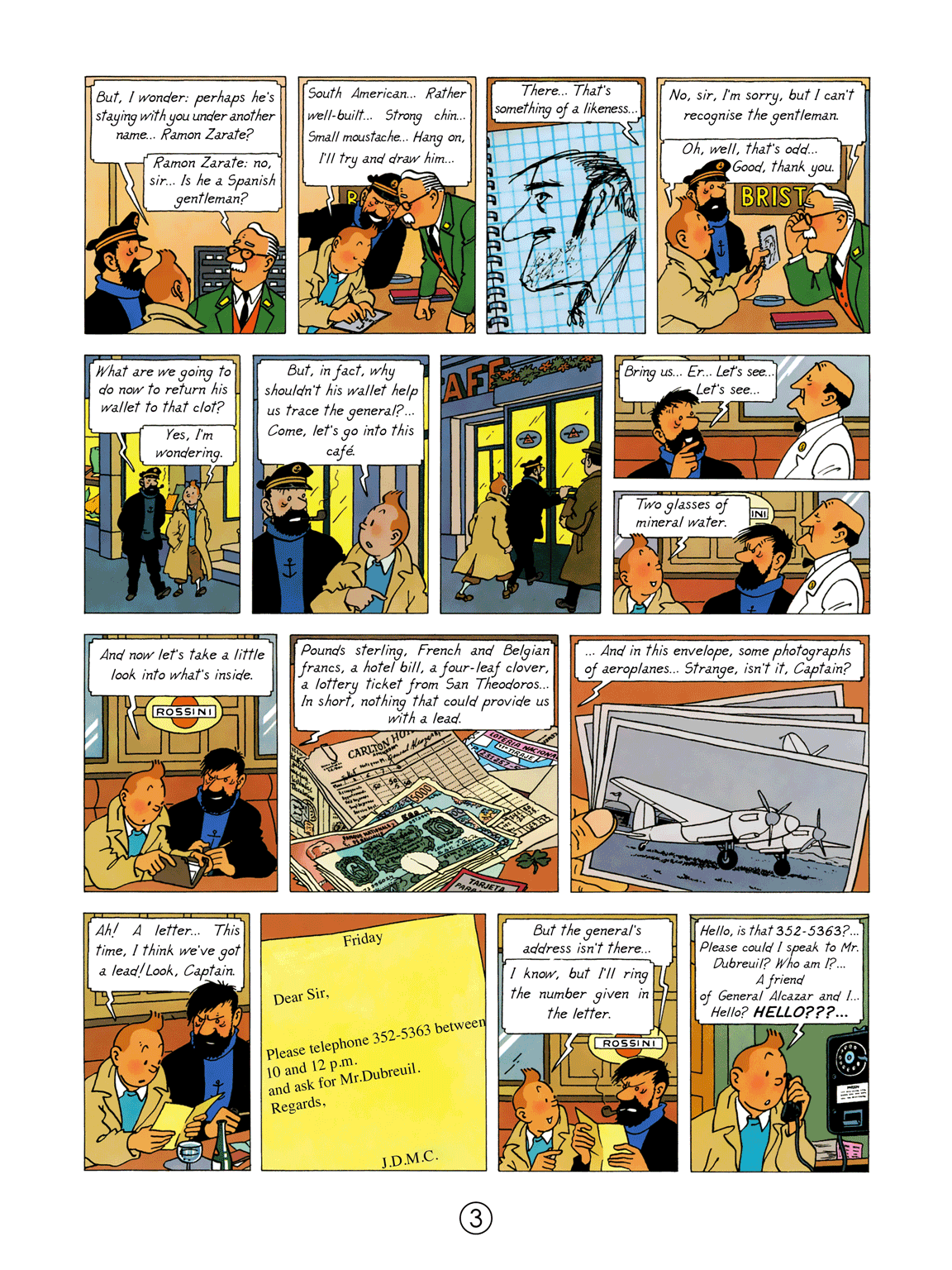 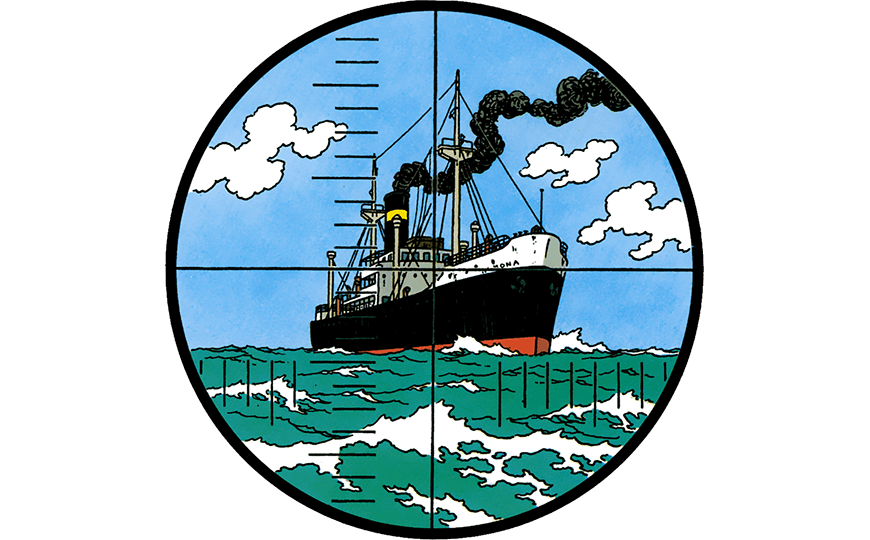 Beginning at the end

In classic literature a story does not usually start at the end, and nor do comic strips usually begin with the words THE END. And yet this is exactly how Hergé launches the story of The Red Sea Sharks.

The front cover brings a dramatic scene up close to the reader. The choppy green and white water is in stark contrast with the wide black area that frames the central picture.
Here the reader becomes a kind of voyeur, a privileged spectator of a scene with dramatic accents, to which the artist invites us. The movement of green and white water contrasts sharply with the static of the large black surface that forms the background of the illustration.
The white letters of the title further accentuate the drama. This unique and striking Tintin front cover stands out; it is a bold success.

To the heart of the action

The title-page illustration plunges us straight into the heart of the action. There is no mistaking the situation: the S.S. Ramona is a target. Hergé chose to put the reader behind binoculars and a periscope for the first two pictures of the book, evoking naval combat and torpedoes. Things look desperate from the outset!
Luckily, as always with Tintin, there is a happy ending...

Walking out of the cinema with Tintin, Captain Haddock bumps into an old acquaintance, General Alcazar. The force of walking straight into the Captain knocks Alcazar’s wallet out of his pocket. Inside the wallet Tintin and Haddock discover photographs of fighter planes.
As they try to return the wallet to its owner, Tintin and the Captain discover that Alcazar has lied about where he is staying. They also find out that he is buying military aeroplanes in a bid to oust his rival, General Tapioca. As Tintin tries to describe Alcazar to a hotel receptionist we see the one and only sketch Tintin draws throughout the entire series, and it is quite a good likeness of the swarthy general.

The Red Sea Sharks holds a record: it is the book in which the highest number of secondary characters in The Adventures of Tintin reappear: General Alcazar (and his rival), Abdullah, Mohammed Ben Kalish Ezab (and his rival), Doctor Müller, Oliveira da Figueira, Rastapopoulos, Jolyon Wagg, Bianca Castafiore, Allan Thompson, Nestor, Dawson... 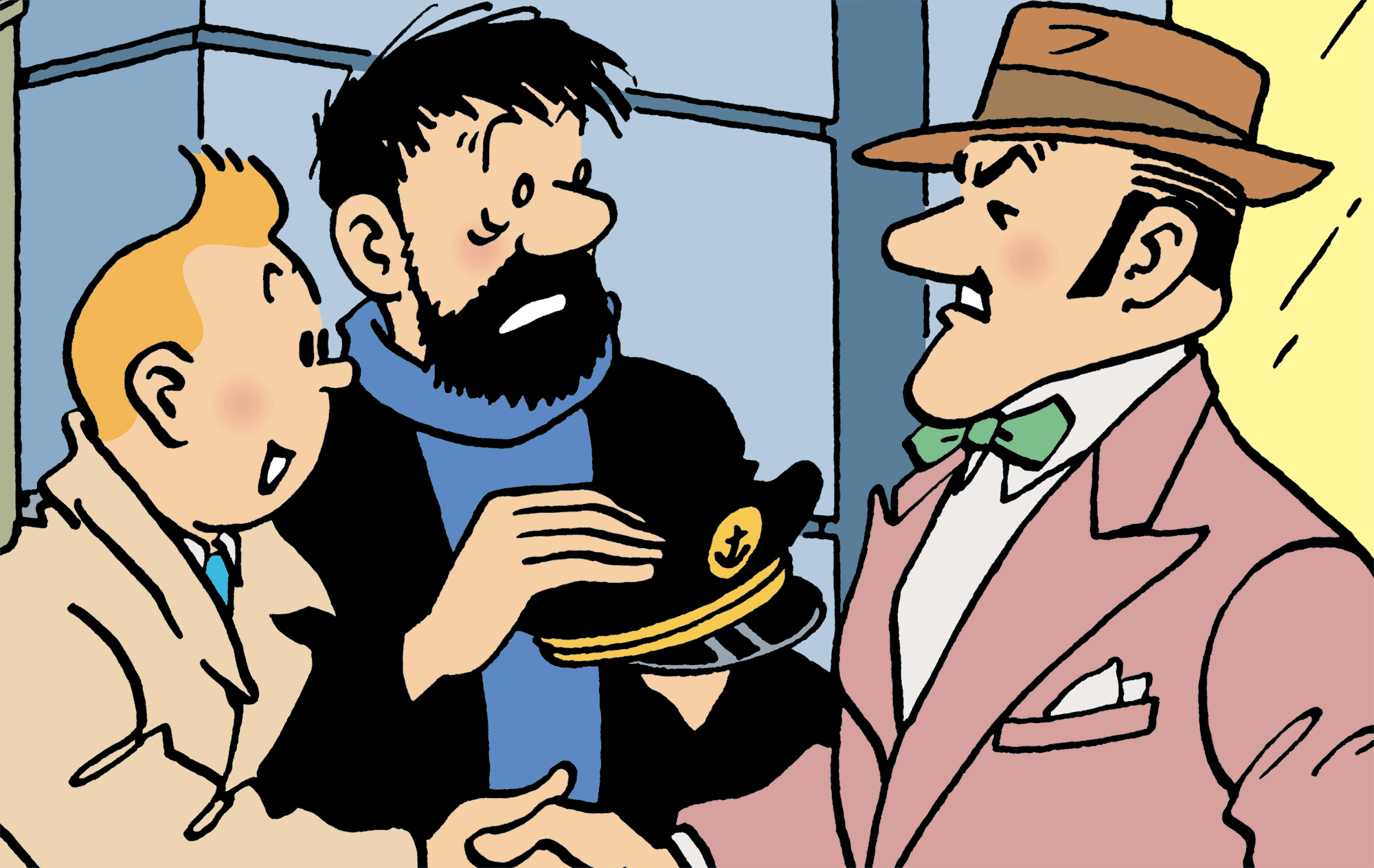 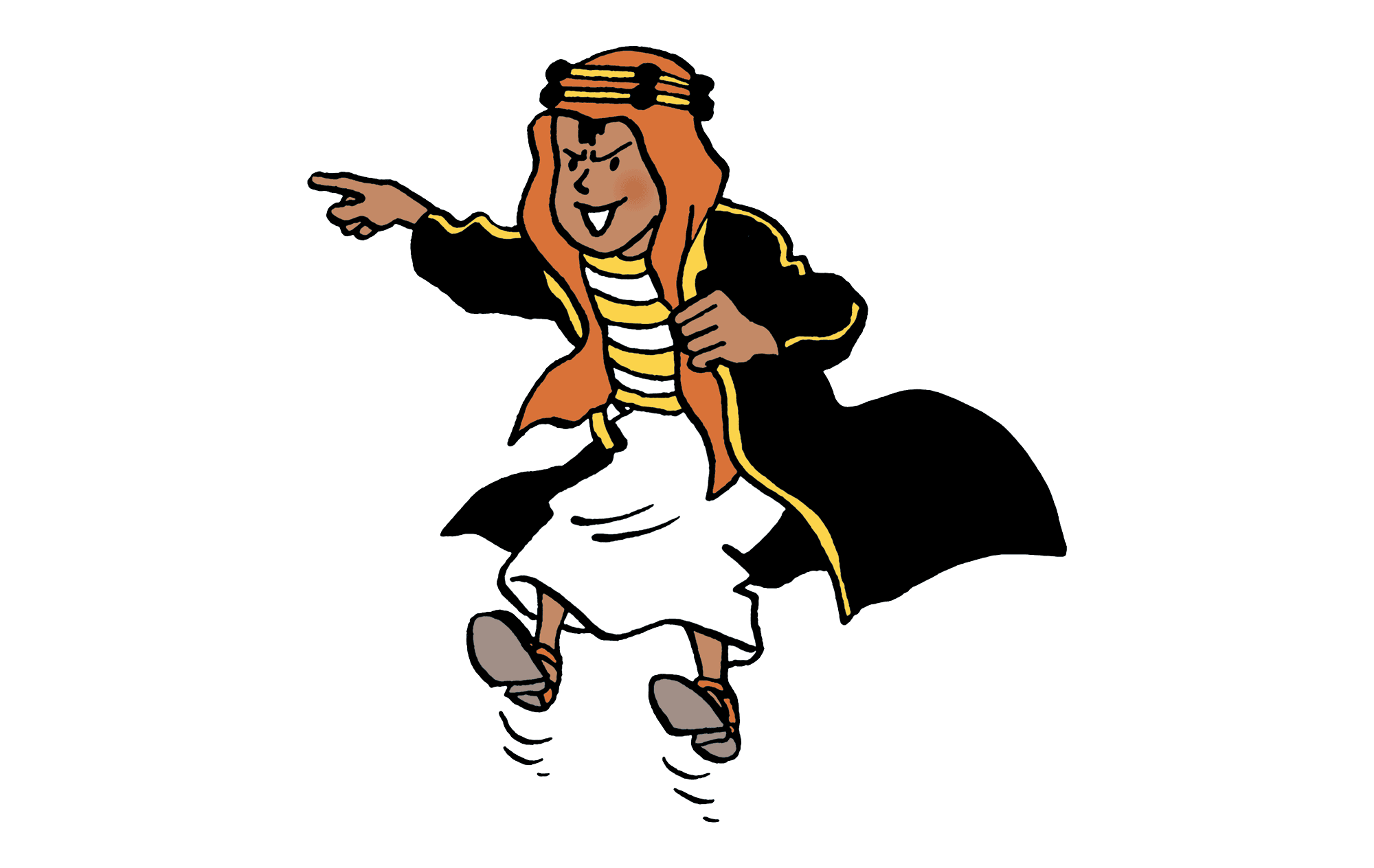 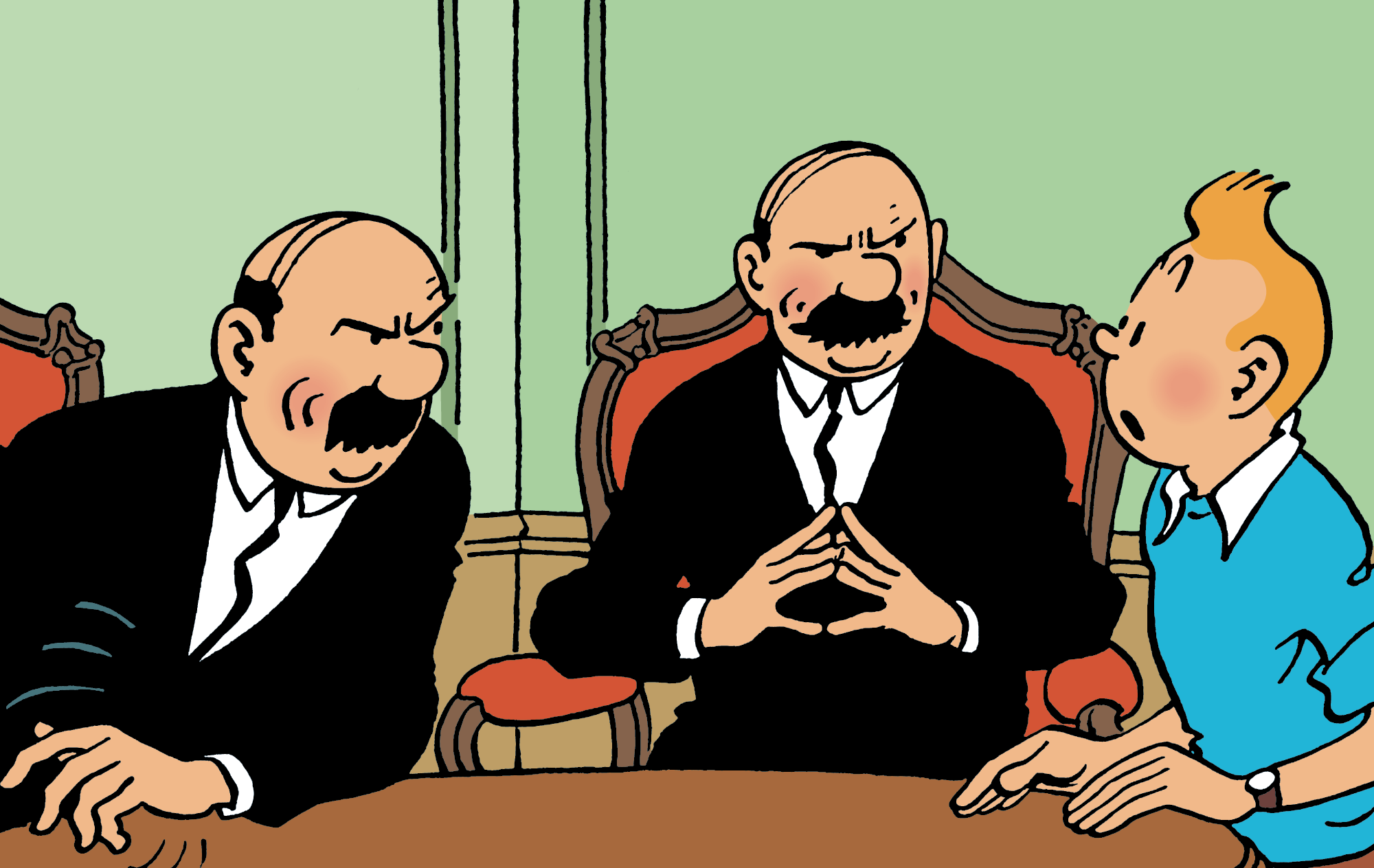 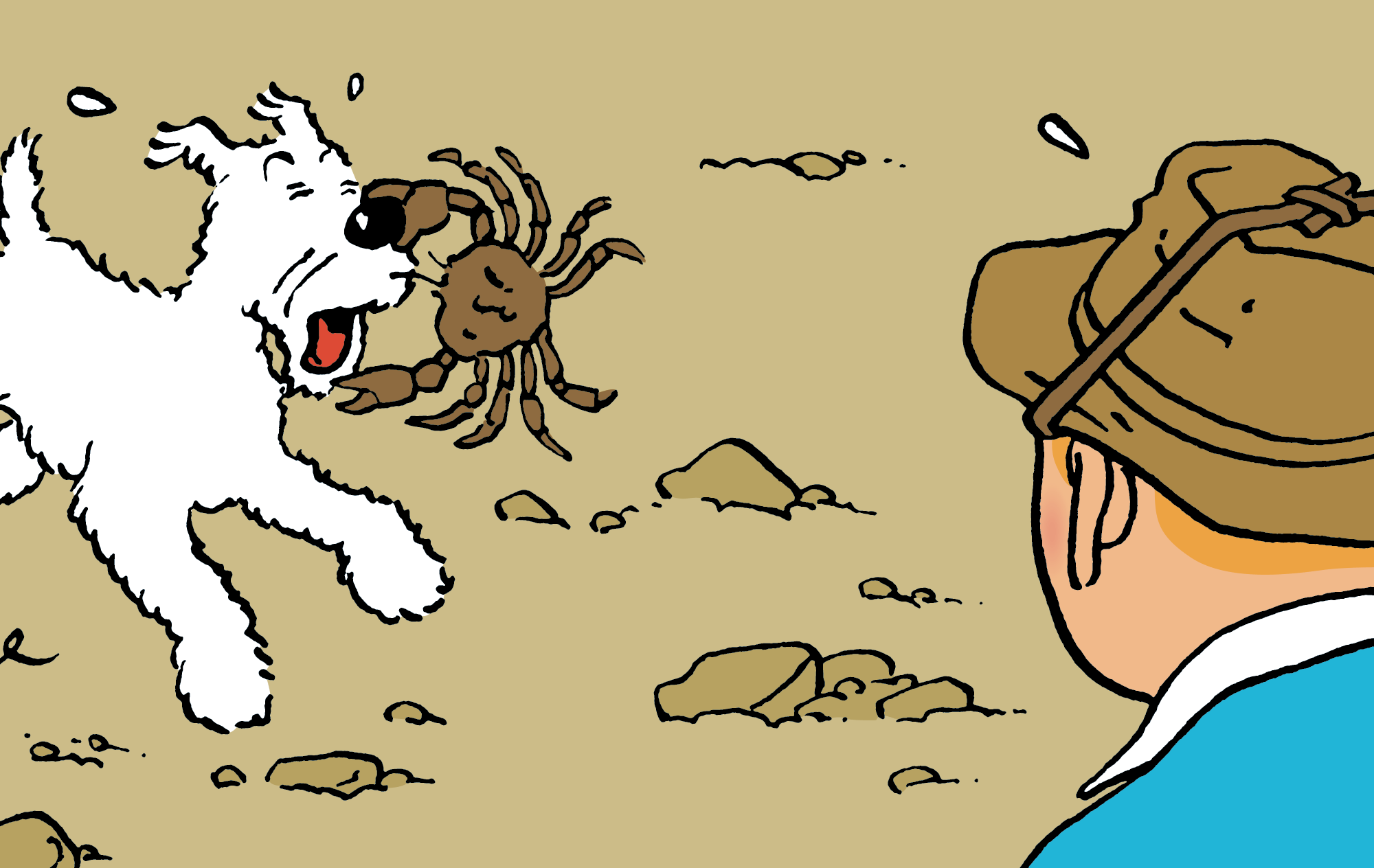 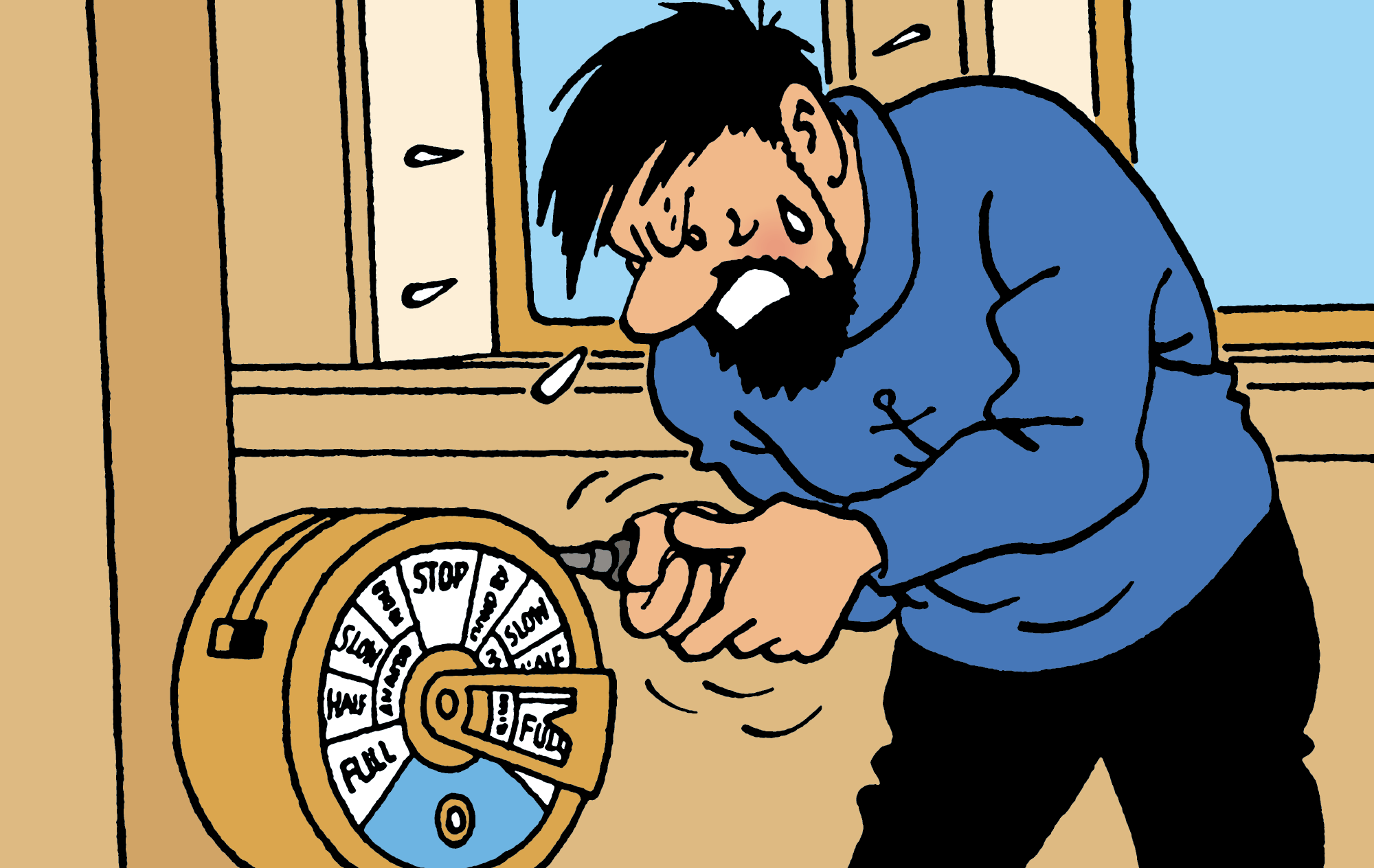 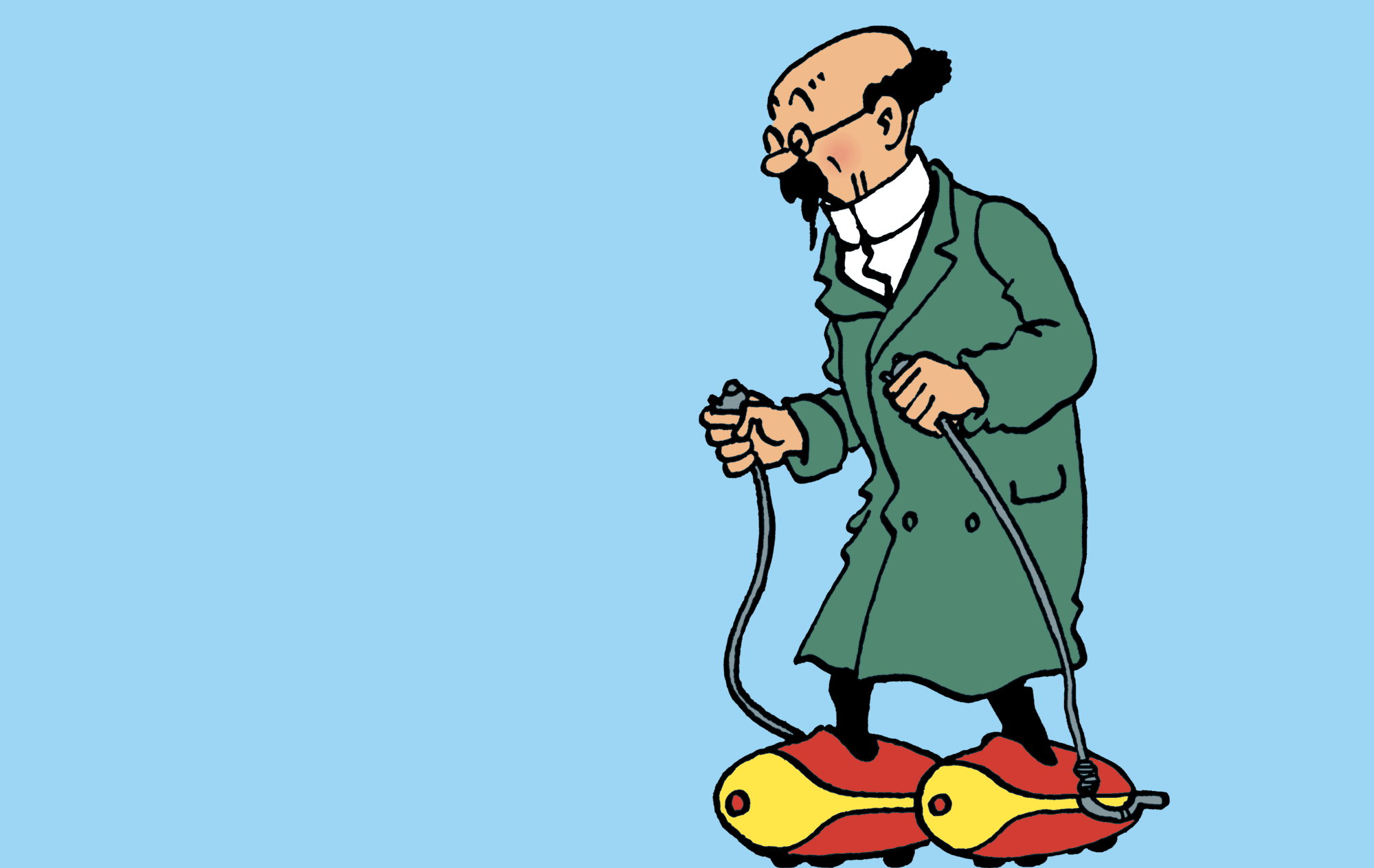 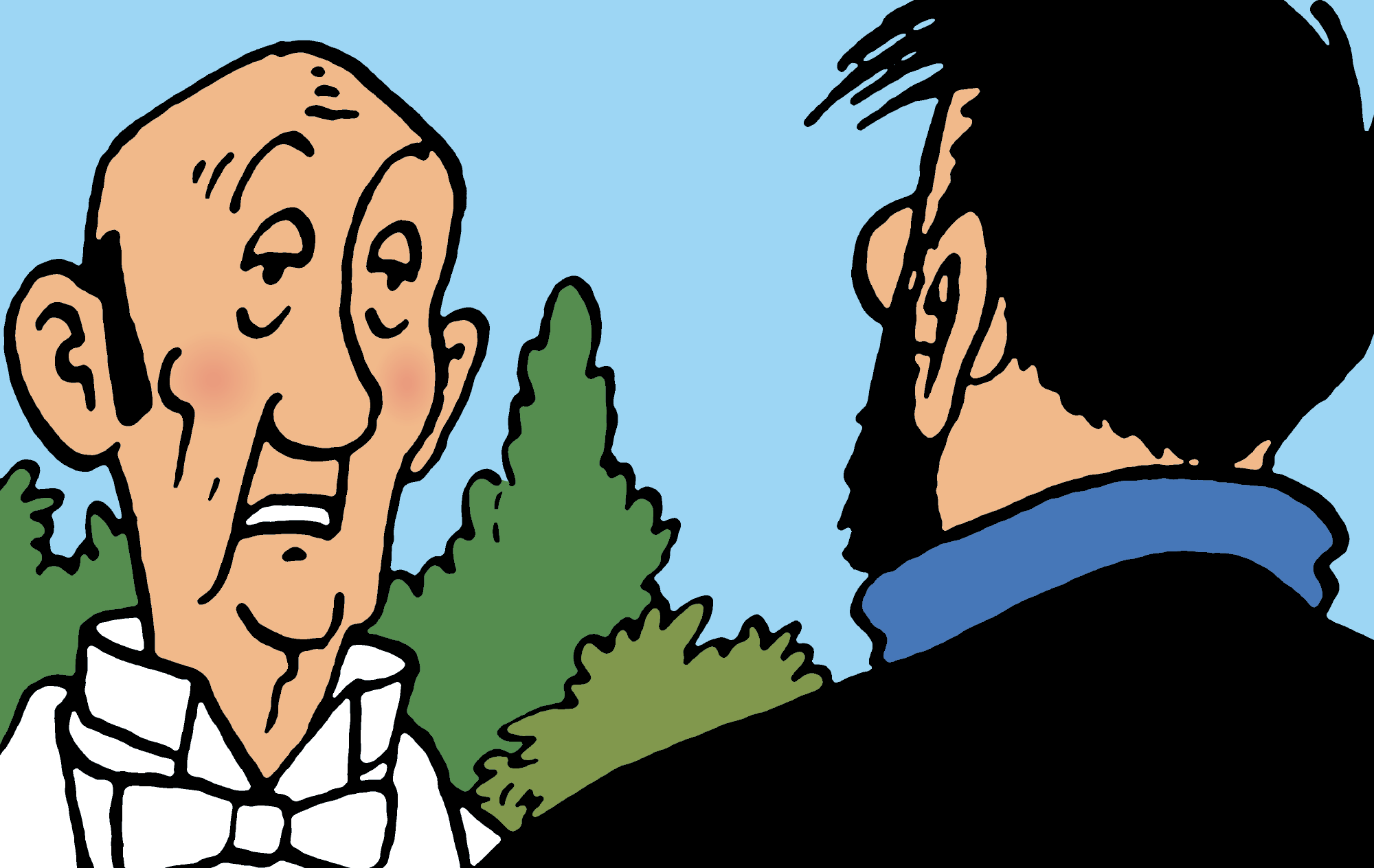 An Estonian pilot and one-eyed mercenary, Hergé introduces Skut as an unlikely ally to Tintin and Haddock; the author also brings the character back later on in the series in Flight 714 to Sydney. Skut manages to stimulate a new insult from Captain Haddock: “lithering bombardier!”

You can lead Captain Haddock to water...

In a café not far from the hotel in which General Alcazar says he is staying, Tintin orders two mineral waters. Doctors will advise you to drink this water, rich in substances conducive to good health. But Captain Haddock would like a different type of drink; he takes advantage of Tintin’s brief absence to make a telephone call to get himself a glass of his favourite poison.
If Tintin was as attentive as the reader, he would notice that while he was away an extra glass has appeared on the table. And it does not appear to contain water.

Rock to the rescue

The leopard may well be the fastest, fiercest animal in the wild, endowed with power and flexibility, but it is no match for a rock on the head. Luckily for Snowy, the beast believes the little white fox terrier has knocked him out!
As the leopard limps away defeated, Snowy shivers in his master's arms. But even a fright like that is not enough to shake the bone from his jaws!

Allan knows exactly what he is doing when he asks Captain Haddock the infamous question about sleeping with your beard above or below the sheets: he is out to cause trouble.
Underneath the rough and unsavoury exterior lurks the mind of a cunning psychologist, capable of stirring up his adversary with a few simple words.

A shark swallowing a mine is not going to go by unnoticed. Especially when it explodes. The red speech bubble, taking up almost all the available space at the top of the frame, says it all. Question marks are dotted all around.

© Hergé / Tintinimaginatio - 2023 - All rights reserved
The question marks come from a US Navy seaplane, the Los Angeles cruiser, the Ramona cargo ship and the submarine of Rastapoulous, alias the Marquis di Gorgonzola. The question marks could practically be the cardinal points, located at the four directions of the compass.

In the 1950s the general public could not get enough of real-life adventure stories; magazines and newspapers published articles about popular scientific endeavours. Hergé read about the journey of Doctor Alain Bombard across the oceans of the world in a small boat. Later the author of Tintin wrote to the French biologist and physician, and in the end wrote Doctor Bombard’s name into The Red Sea Sharks: on page 36 Tintin refers to the Doctor’s survival techniques. 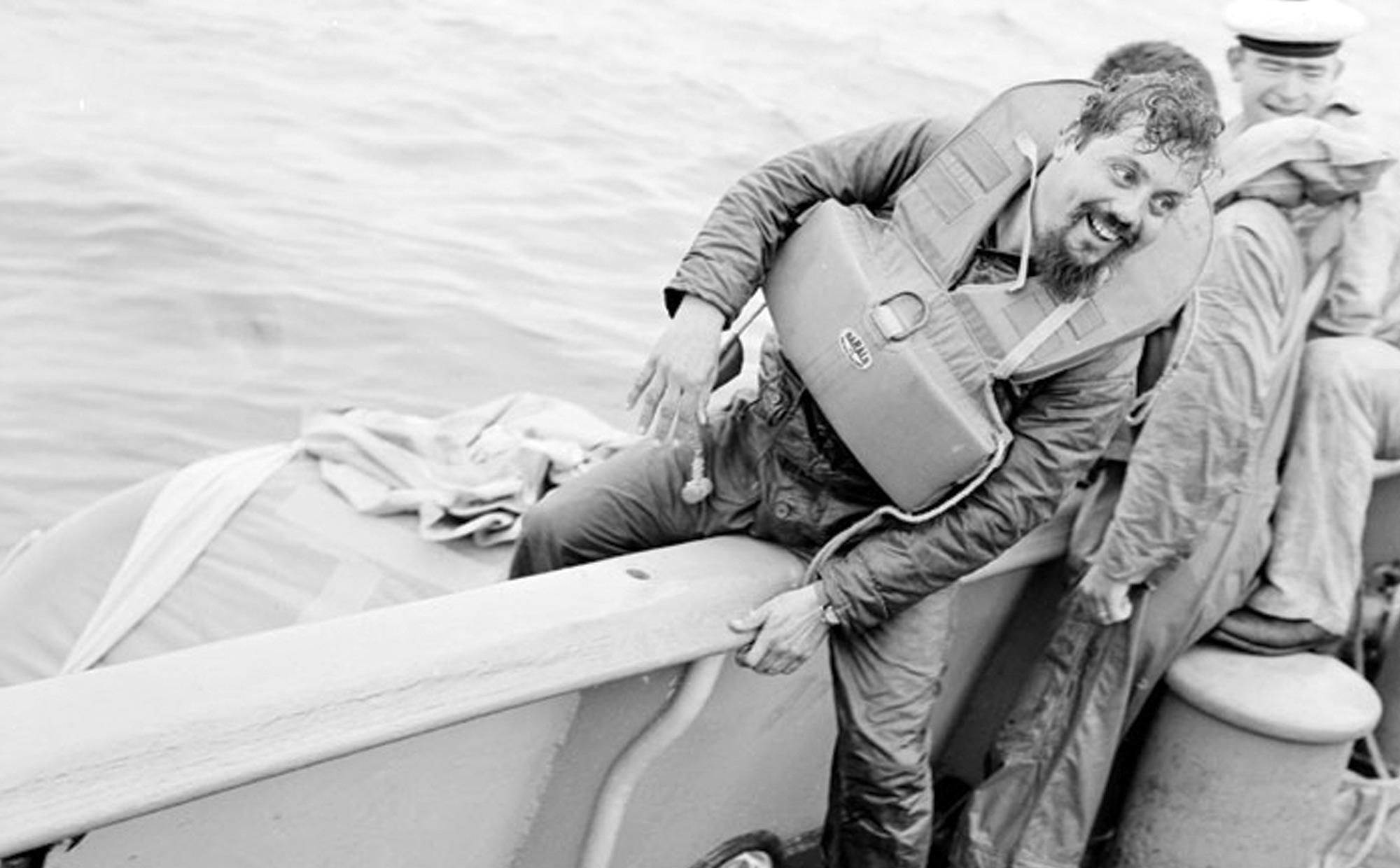 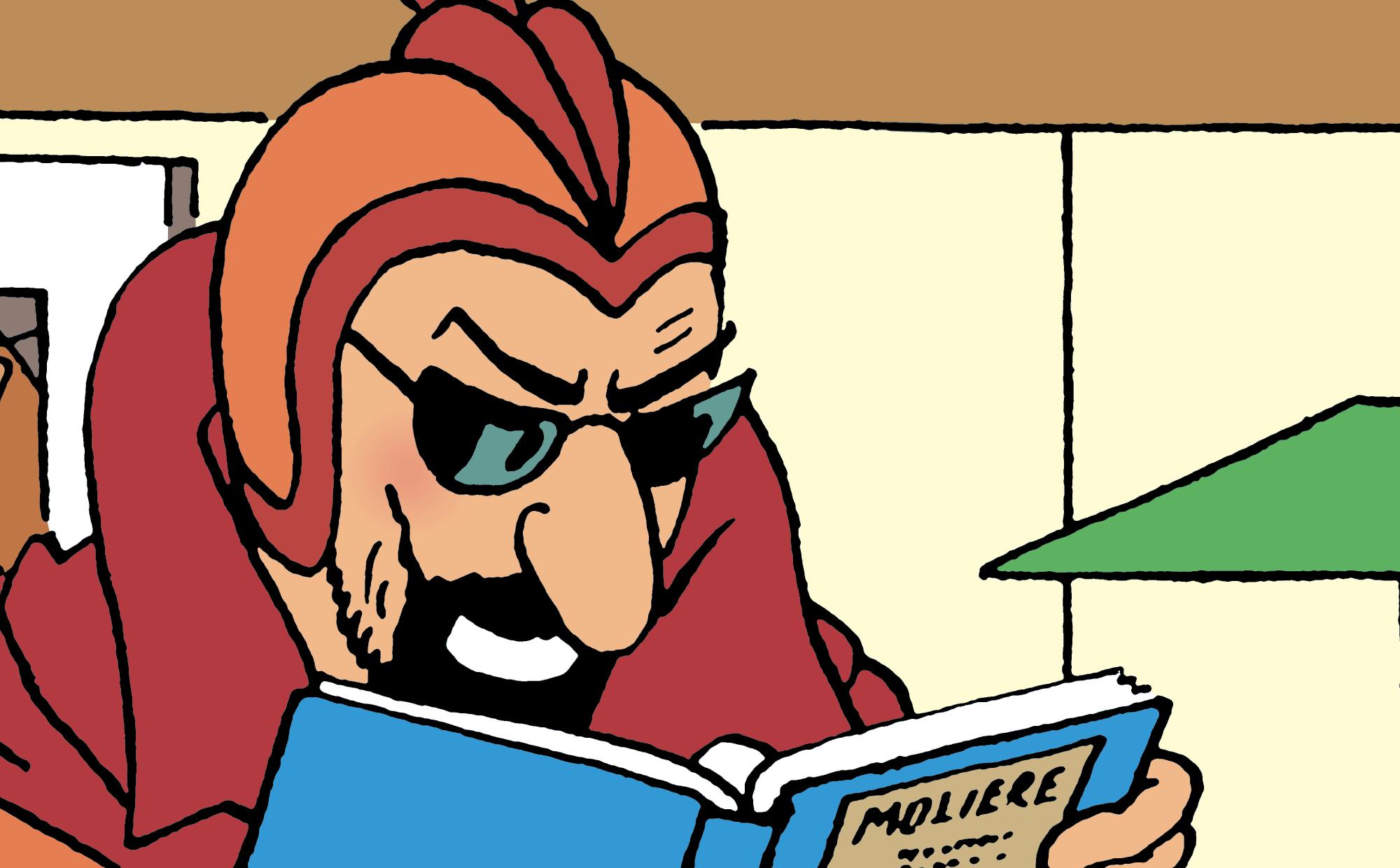 10 reviews
Log in or create a Tintin.com account to write a review.
A lithering bombardier in ten thousand terrifying thundering typhoons in billions of billious of blue blistering barnacles
My favourite!
Red sea shark is one of my favorite Tintin Books!
Introduced a great new character and gave extra insight on Rastapopoulos.
in Persian:
انبار ذغال سنگ
the best
The Red Sea Sharks
I don’t know why, but this album is quite boring and complicated.
me too.
The "Red Sea Sharks" is one of my favorit albums. It exposes the unleagal illegal transport and sale of weapons. At a time when one did not show or write about this topic. The story is great, funny and exiting. Suddenly one of the best Tintin albums.